Alzheimer’s may ‘begin in CHILDHOOD’: Gene that raises the risk of the disease by up to five times is linked to low IQ in seven-year-olds

The disease has long been associated with the ‘dementia gene’ APOE. This comes in multiple forms, with around a quarter of people carrying a variation called e4.

Carrying that copy of e4 has been shown to more than double a person’s Alzheimer’s risk, while some people with it may have a risk up to five times higher.

While Alzheimer’s is considered an old person’s disease, a study found children as young as seven who carry just one e4 variation do worse on IQ tests.

Researchers from the US warn this shows the ‘deleterious effects of APOE e4 are manifested before adulthood’, which could trigger cognitive decline. 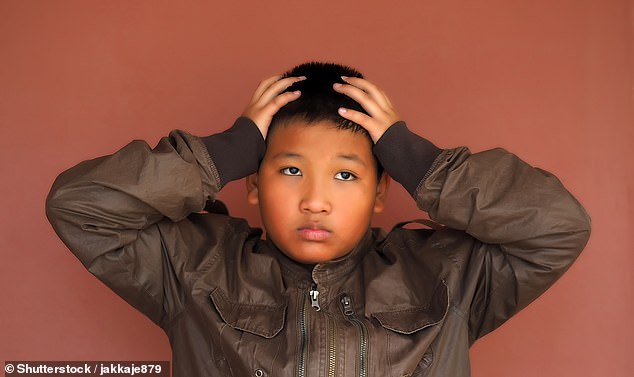 The research was carried out by the University of California, Riverside, and led by Dr Chandra Reynolds, professor of psychology.

Dementia affects 850,000 people in the UK, of which 62 per cent have Alzheimer’s, according to the Alzheimer’s Society.

And in the US, 5.8million people live with the condition, which is set to rise to nearly 14million by 2050, Alzheimer’s Association statistics show.

APOE has ‘the greatest known effect of any gene of developing late-onset Alzheimer’s’, according to the Alzheimer’s Society.

Alzheimer’s disease is a progressive brain disorder that slowly destroys memory, thinking skills and the ability to perform simple tasks.

It is the cause of 60 percent to 70 percent of cases of dementia.

The majority of people with Alzheimer’s are age 65 and older.

It is unknown what causes Alzheimer’s. Those who have the APOE gene are more likely to develop late-onset Alzheimer’s.

There is no known cure for Alzheimer’s, but experts suggest physical exercise, social interaction and adding brain boosting omega-3 fats to your diet to prevent or slowdown the onset of symptoms.

Everyone has two copies of the gene, with some being e2/e3, others e2/e4 and so on.

Around a quarter of people have one copy of e4, which slightly more than doubles their risk of the disease.

Around two per cent have a ‘double dose’, where they inherit e4 from each parent.

This increases their risk by three-to-five times.

Little is known about how APOE affects brain health in early life.

The researchers therefore analysed variations of the gene in 1,321 participants of the Colorado Adoption/Twin Study of Lifespan behavioral development.

The participants completed cognitive tests at seven, 12 and 16 years old.

Results – published in the journal Neurobiology of Aging – revealed the children and teenagers who carried APOE e4 scored worse on IQ tests by an average of 1.91 points.

The researchers warn this small reduction in IQ could have a big impact on a person’s cognitive health in later life.

And the participants who carried a double dose did worse than those who had just one e4 variant.

The results also showed the female participants were the worst affected.

For every e4 genetic variation they carried, their IQ scores went down by 3.41 points versus a 0.33 reduction in their male counterparts.

‘These results suggest deleterious effects of the APOE e4 allele are manifested before adulthood, especially in females,’ the researchers wrote.

They hope their findings will lead to additional research that could prevent cognitive decline.

‘APOE may emerge early and become magnified later in the life course, and if so, childhood represents a key period of intervention to invest in and boost reserves,’ they wrote.