A study found a mixture of crushed eggshells and a type of gel could help rats’ bone cells to regrow faster and harder in a lab experiment.

The mixture could be used to make a mould into which a human patient’s own bone cells could be added to help them regrow and be put back in to fix an injury.

Scientists hope the technique will help treat people whose bones have been damaged because of old age, disease or injury.

And they added it could be an environmentally friendly way of doing so because it uses up millions of tonnes of food waste in the process. 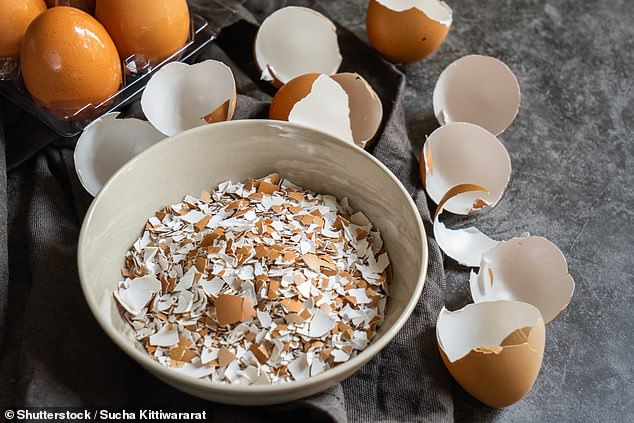 The technique was developed by the University of Massachusetts in a team led by Dr Gulden Camci-Unal, an assistant professor of chemical engineering.

‘This is the first study that uses eggshell particles in a hydrogel matrix for bone repair,’ Dr Camci-Unal said.

‘We have already filed a patent for it and are very excited about our results. We anticipate the process can be adapted for use in many significant ways.’

Eggshells have been tested as a way of repairing long-term flesh wounds.

A team of researchers involving a hospital in Bradford in the UK developed a dressing from discarded chicken eggs in 2016.

Initial results suggested the eggshell dressing speeded up healing by providing the proteins that skin needs, according to its manufacturer, Biovotec.

Chronic wounds – those that take more than six weeks to heal – include foot ulcers; pressure or bed sores; and leg ulcers caused by high blood pressure in the veins of the legs.

And dressings have already been made from animal parts such as fish skin and pig and horse tissue.

The eggshell’s inner membrane helps to protect the embryo during incubation, and the scientists used the same inner membrane, crushed it into a powder and made it into a dressing which could be placed on a wound.

‘The affordability of these dressings and the anticipated increase in healing rates is expected to save the NHS significant costs, while improving quality of life for patients.’

After 20 days the eggshell dressing was found to have comparable healing effects to the most advanced synthetic dressings.

To test the potential of eggshells, the scientists mixed them in with a gelatin-based hydrogel. This substance was then cultivated in an incubator.

Immature bone cells were taken from rats and encapsulated with the hydrogel mix. These cells go on to become osteoblasts, which form new bone.

This mix was then implanted back into the rodents to test the mixture’s ‘biocompatibility and degradation’.

Results – published in the Biomaterials Science – revealed the mixture caused pre-osteoblasts to develop into mature cells.

They hope the technique could be used in grafts to help repair damaged bone, fill in areas where bone is missing or provide extra support during joint replacements.

As well as bone, the same method could be used to grow cartilage, teeth and tendons.

Eggshell particles could even be a vehicle to deliver genes and drugs into the body.

Due to the bone being generated from cells taken from the patient, the risk of the their immune system rejecting it is greatly reduced.

And eggshells are an environmentally-friendly way of supporting bone growth.

‘By repurposing them, we can directly benefit the economy and the environment while providing a sustainable solution to unmet clinical needs.;

This is not the first time Dr Camci-Unal has taken an unconventional approach to advance medical treatments.

Last year, her team used the principles behind origami – the ancient Japanese art of paper folding –  as inspiration to build tiny 3D structures where biomaterials can be grown in the laboratory to create new tissue.