A quarter of cancer patients in England experience avoidable delays before being diagnosed, a study suggests.

Researchers found 24 per cent of sufferers have to wait up to two months longer than most to be told they have the killer disease.

An early diagnosis can be the difference between life and death for patients with aggressive cancers, experts warn.

Survival rates are highest when the tumour is treated before it spreads around the body.

Long waiting times, either for tests or results to come back, were responsible for the delayed diagnosis in a quarter of cases.

Cancer Research UK, which conducted the study, said the staffing crisis currently crippling the NHS was to blame. 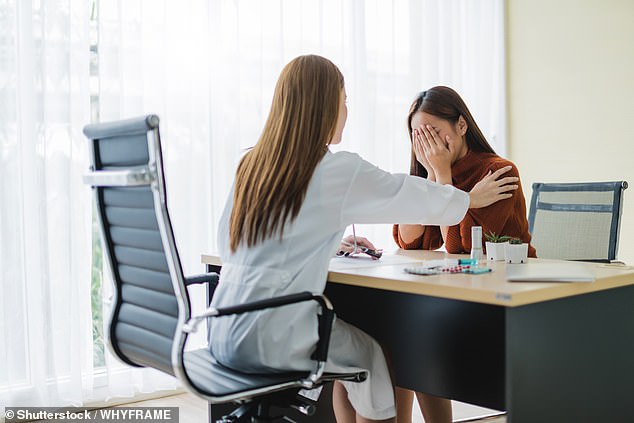 A quarter of cancer patients in England experience avoidable delays before being diagnosed, research suggests (stock)

Other delays included patients being misdiagnosed due to having symptoms that are consistent with minor conditions or missing appointments.

Researchers based at the charity looked at 14,300 people who had been diagnosed with cancer in England last year.

They found nearly 3,400 patients experienced a delay that could have been avoided.

Half of these patients waited around two months longer to be diagnosed, compared with those who didn’t have an avoidable delay.

The reasons for delays are complex but the researchers attempted to identify what could go wrong by quizzing GPs.

They asked them to identify when the delay happened – either before the patient saw their doctor, while they were still being assessed by the GP practice, or after they had been referred.

Data showed 13 per cent of all avoidable delays happened before the patient saw their GP. This could be for reasons such as missing their appointment.

Cancer waiting times are stuck in a ‘downward spiral’ and are costing lives, a damning report revealed in June.

Delays are at their worst level on record – with one in five cancer patients forced to wait more than the target of 62 days to start hospital treatment.

A report by the Public Accounts Committee said waiting times have ‘steadily worsened in recent years’ for both cancer treatment and routine surgery.

It warned that a key 18-week target for planned operations for other ailments has effectively been scrapped, adding that ‘more and more patients are being let down by the continued failure of the NHS to meet waiting times’.

Surgeons told MPs on the committee that millions of patients were being left ‘in pain and in limbo’ because of delays – and with their conditions deteriorating. And experts warned that delays dramatically reduced cancer patients’ chances of survival.

Figures show that the number of people waiting for non-emergency surgery such as hip replacements now stands at 4.2million – an increase from 2.7million in 2013.

Patients have a right to access services within maximum waiting times, but it has been six years since the NHS met the 62-day target from urgent referral for suspected cancer to treatment.

Thirty-eight per cent occurred after the GP referred them to hospital. This may include patients who have been misdiagnosed or have other underlying health woes.

The other half (49 per cent) happened while the patient was being assessed by the GP surgery – including waiting for tests to be done and results to be sent back.

‘Our research shows there’s a good opportunity to significantly reduce delays by cutting the time it takes for patients to have tests done.

‘We need more research to develop and evaluate new diagnostic tests for patients with vague symptoms and a better way to manage them.’

Over the last few years, GPs have been referring more patients with suspected cancer symptoms earlier.

But hospitals do not always have the staff to meet the growing number of patients.

One in 10 diagnostic posts are vacant in the UK and thousands more will be needed in the future.

She added: ‘Trying to find cancer in people with a range of symptoms and other conditions is very complicated.

‘And while NHS doctors and nurses are doing everything they can to see patients quickly, the NHS is experiencing a staffing crisis.

‘Waiting for a possible cancer diagnosis is an extremely anxious time, so no one should have to wait longer than is absolutely necessary.

‘The Government will never achieve the diagnosis and survival ambitions they have set unless they urgently address NHS workforce issues.

‘Without more of the right staff, including GPs, it will be impossible to diagnose and treat patients more swiftly and effectively.’

The NHS says you should not have to wait more than a fortnight to see a specialist if your GP suspects you have cancer and urgently refers you.

In cases where cancer has been confirmed, patients should not have to wait more than 31 days from the decision to treat to the start of treatment.

The findings are published in the journal Cancer Epidemiology.