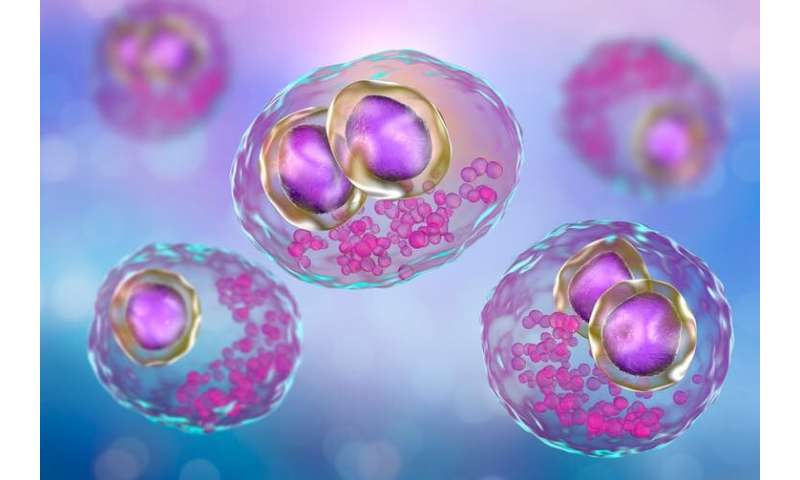 Most of us have heard of viruses such as measles and mumps—not to mention the more serious HIV and Ebola. But who has heard of Human Cytomegalovirus (HCMV)? I certainly hadn’t until I started my Ph.D. back in 2001.

HCMV infects 50-60% of people in the UK alone, and infection is reportedly as high as 100% in developing countries such as the Philippines and Uganda. What’s more, once infected you are likely to carry it for the rest of your life. However, while HCMV can cause all kinds of health problems, research into the virus is also helping us harness the power of the human immune system to treat certain types of cancer.

HCMV is transmitted through bodily fluids such as urine, blood, saliva and breast milk, and the risk of being infected is estimated to be 1% per annum. It is also estimated that every year one or two babies in every 200 are born with HCMV. Up to 20% of babies who are infected in utero die, and HCMV is estimated to cause up to 12% of all sensorineural hearing loss and 10% of cerebral palsy cases in newborns.

If a mother is infected for the first time while she is pregnant the risk of miscarriage, stillbirth and fetal hydrops—a serious condition resulting in the abnormal accumulation of fluid in the fetus—are all increased too.

HCMV infection also poses a major risk to children and adults. It is a common cause of death and disease in people suffering from AIDs, for people who have undergone organ and bone marrow transplant and for those being treated with chemotherapy for cancer too.

So, if it can cause such serious problems, why haven’t many people heard of HCMV? Well, for most of us it does not cause a problem. If your immune system is fully developed and functions well your body can keep the virus in check. This explains why HCMV can cause congenital defects—fetuses and newborns do not have fully functional immune systems so the virus can replicate and cause disease.

In people who have fully functional immune systems, HCMV viral replication is controlled. However, the virus has been infecting humans for 180 million years and during this time it has evolved many mechanisms that allow it to specifically evade or, more properly, “modulate” the immune system. This means that the body is not able to completely eradicate HCMV infection so it establishes a persistent infection. In most cases, HCMV only causes disease in infected individuals if their immune system becomes compromised.

Since 1954, when HCMV was first isolated, researchers have been studying the virus, and how the immune system responds to it, in laboratories. They’ve found that one type of immune cell that is important for controlling HCMV infection is a white blood cell called the Natural Killer (NK) cell. Studies have shown that people who are deficient in these blood cells often suffer from overt HCMV disease.

In 1956 a second strain of HCMV was isolated and this became a workhorse of HCMV research. However, four decades later, in 1996, it became apparent that there were significant genetic differences between this virus and other “laboratory strains” of HCMV, as well as samples of the virus that had been freshly isolated in the clinic.

A possible explanation for this is that although the immune system is critical for controlling HCMV in the body, it is not present in a flask. So certain genes are no longer under selective pressure, which ultimately causes a section of the genome to be deleted. Further research has shown that five products from HCMV genes—that are deleted in some of the laboratory strains—modulate the response of NK cells to the virus. One of these HCMV encoded genes, UL141, is staggeringly effective—it can inhibit ~70% of natural killer cells.

At present researchers know of 16 HCMV genes which modulate NK cells and this knowledge is helping scientists understand how these blood cells function. This is important because as well as recognising virally infected cells, NK cells are adept at recognizing tumor cells. The ability of NK cells to eradicate tumour cells—and our growing understanding of what determines how these cells recognize their targets—has led scientists to investigate the clinical efficacy of NK cells for immunotherapy. Now, new therapies are being developed which hope to use the anti-tumour targeting abilities of NK cells to treat cancers such as Acute Myeloid Leukaemia.