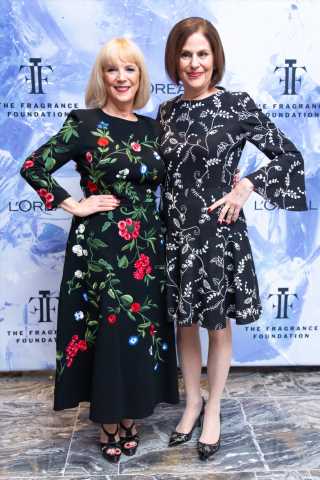 Carol Hamilton is the first to admit that she knew very little about fragrance when she took over as head of L’Oréal USA’s Luxe division in 2008.
“Nada. Rien!” she said, as she was being inducted into the Fragrance Foundation’s Circle of Champions on Wednesday evening in New York. “I grew up in drugstores — my métiers were makeup, skin care, hair care and hair color.”
But in characteristic Hamilton fashion, the executive, who today is group president of acquisitions at L’Oréal USA, didn’t just fill in her knowledge gap, she parlayed it into a big business opportunity by choosing the then-newish Viktor & Rolf Flowerbomb as a project to learn the ins and outs of fragrance marketing in the prestige sector.
“I loved the juice and its message of femininity and empowerment,” she said of why she chose that fragrance in particular. At the time, the scent ranked number 20 in the U.S. market. Five years later, it was number three.
While it sounds easy, Hamilton emphasized it was anything but. “It’s extremely difficult to make scents come to life — I’ve realized it’s the most difficult of métiers,” she said, to a packed crowd of more than 200 beauty executives who came out to celebrate her, including L’Oréal USA’s new chief executive officer Stéphane Rinderknech.
Many in attendance — including Saks’ Kate Oldham, IFF’s Nicolas Mirzayantz, Camille MacDonald and industry legend Annette Green — were former Champions themselves, and this year’s event marked the 20th anniversary of the program.
Hamilton was introduced by Alexandre Choueiri, global president of Ralph Lauren Fragrances; Sylvie Ganter, creator and founder of Atelier Cologne, and Leslie Marino, who today is the general manager of Redken and Purology but worked on the designer fragrance business when Hamilton first took the helm of luxury.
“It was the most challenging moment of my career, because of the financial crisis,” Marino said, “but Carol wasn’t daunted. She launched e-commerce and CRM, leading the company’s digital transformation.”
Marino also cited Hamilton’s strong support of female leaders at L’Oréal and in the business world overall, and her numerous philanthropic efforts, including raising more than $15 million for the Ovarian Cancer Research Fund.
Giving back was also a key theme of the evening. Linda Levy, president of the Fragrance Foundation, announced Next for Autism as the giveback partner for the June 2020 Fragrance Foundation Awards. To launch the partnership, the duo will host Power Pedal, a fund-raising spin class in early December, which has already garnered more than $150,000 in support.
But it wasn’t all reverence and no roast. While noting that L’Oréal would never have achieved the number one spot in fragrance were it not for Hamilton’s leadership (“she’s tiny in stature but giant in achievement”), Choueiri laughingly remembered that Hamilton is an always-on executive. He recalled a Las Vegas business trip, when everyone except for Hamilton was drooping with exhaustion.
Finally, Hamilton’s energy started to flag, too, and she suggested everyone take a nap.
“Five minutes later,” said Choueiri, “she was back to business and ready to go.”
Comparing Hamilton to a superhero, Ganter lauded the executive for helping her navigate the corporate structure of L’Oréal after selling their company in 2016. “You enabled us to keep our free spirit while entering the largest beauty company in the world,” she said. “Your advice was fight for what we believe in, question what’s not right and always rise above.”
More from WWD:
L’Oréal Outpaces Sales Forecasts in Q3
Douglas Builds Beauty Marketplace With Partners Online
Source: Read Full Article