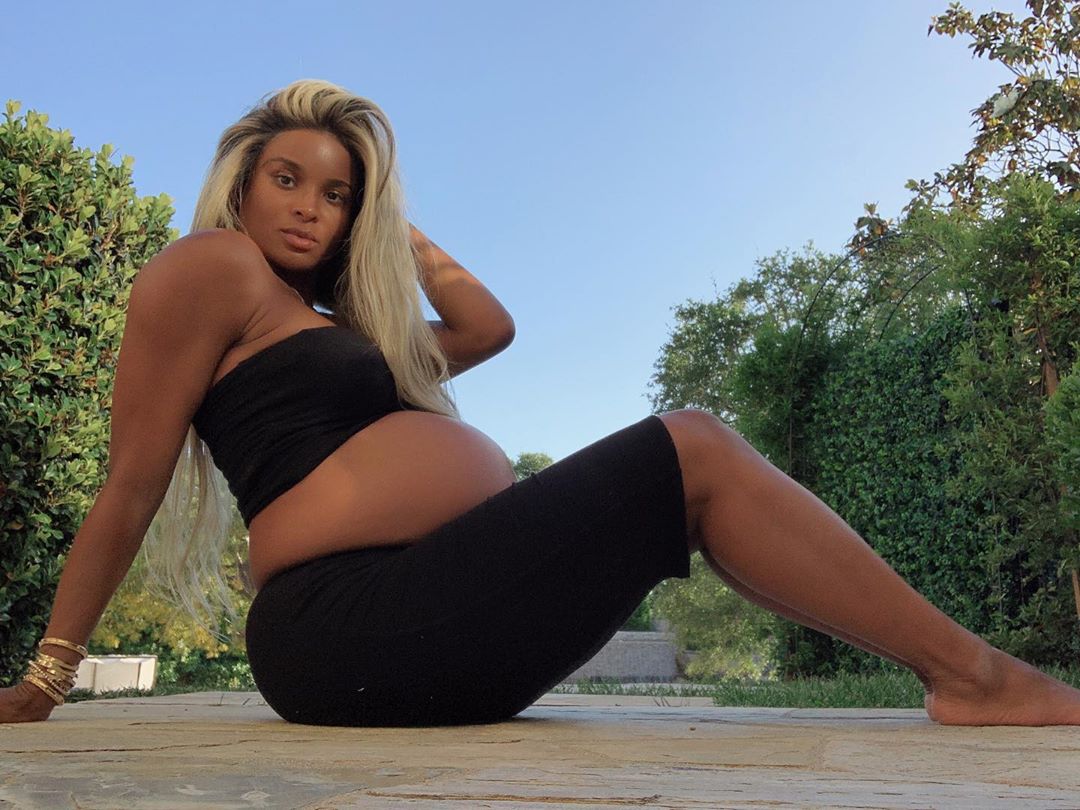 Even without a photographer on hand, Ciara knows how to work her angles, glowing in her latest solo photo shoot.

On Tuesday, the third-time mom-to-be shared a series of photos on Instagram from her "selfie timer shoot," where she showed off her growing baby bump while sporting a black two-piece spandex set.

The singer debuted her latest blonde hair color with darker roots and kept it parted it to the side for the series of pictures.

In one shot, the "One, Two Step" singer sat on the ground in a lounging pose while running one hand through her hair.

Shortly after, the artist posted two more selfies to her feed, the first of herself looking straight into the camera while caressing her bump and the second only showing the top half of her body as she sports dark shades and a black T-shirt.

The singer, 34, also accessorized her photo looks with a cross necklace and a collection of gold bangles.

Ciara — who tied the knot with husband Russell Wilson, 31, in July 2016 — announced that she was expecting baby No. 3 on Jan. 30, sharing a stunning Instagram photo of herself in a bikini, showing off her bare baby bump.

The couple revealed the sex of their baby on the way last month with a little help from daughter Sienna Princess, 3, and Ciara's son, Future Zahir, 6.

While Future declared he was hoping for a baby brother, his "Goodies" singer mom said in the video posted to social media that she only hoped for "whatever God" had in mind for their family.

But little Future got his wish. "YEAH!" the little boy screamed excitedly in the video shared to Wilson's Twitter account at the time, running around the yard as soon as blue smoke and confetti filled the air.

The couple recently celebrated Future's 6th birthday with a special at-home party complete with games and a festive cake.

Pulling out all the stops, the singer and Wilson made sure there were plenty of activities to keep the whole family entertained for her son's birthday bash. In addition to a sign in the backyard, which spelled out her son's name in big white letters, they played some family games, including dodgeball, and also made a quarantine "obstacle course.”

Besides beating the Seattle Seahawks quarterback, during a spinning tops battle, the birthday boy, who is the son of the singer and ex-fiancé Future, showed off his skills during a water bottle flipping game.

“Counting The Blessings,” Ciara wrote on Instagram, alongside a smiling family photo from the day. “Grateful for Joy. Good ol Qurantine [sic] Obstacle Course and In Door Camping Birthday for The Birthday Boy.”