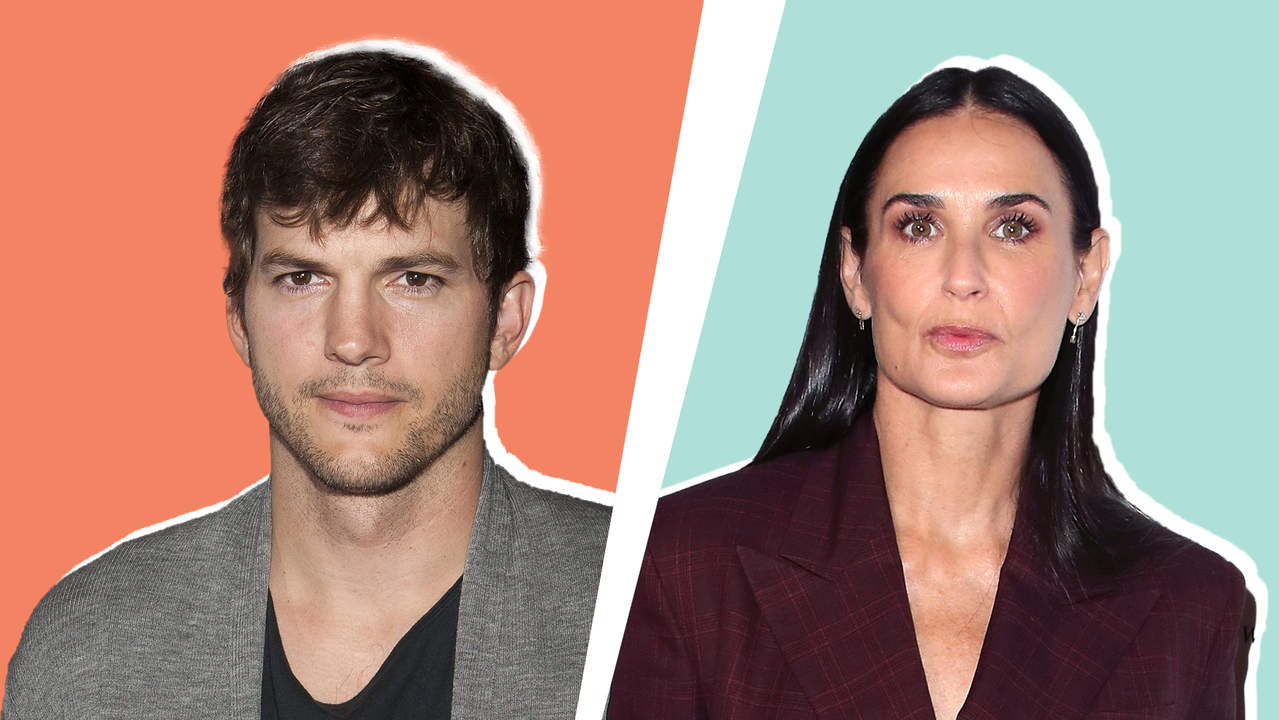 Demi Moore’s new memoir, Inside Out, is filled with personal, sometimes painful details of the star's life and relationships behind the scenes. Moore opened up about her rough childhood, choppy ascent to fame, self-destructive substance abuse, and dysfunctional marriages—including her marriage to Ashton Kutcher.

Moore was married to Kutcher for six years before they went their separate ways. In her book, the 56-year-old actress writes that their marriage was unhealthy for lots of reasons—including their relationship dynamic, which had her going “into contortions to try to fit the mold of the woman he wanted his wife to be,” she wrote.

She explained that despite her commitment to sobriety, she started drinking more because she thought Kutcher wanted her to. She also agreed to have threesomes. “I put him first,” she wrote. “So when he expressed his fantasy of bringing a third person into our bed, I didn’t say no. I wanted to show him how great and fun I could be.”

Changing to please a partner is an all-too-familiar move. I’ve seen many of my friends lose their sense of self in a relationship that’s pushed them to be someone they’re not. And as much as I hate to admit it, my friends would probably say they’ve watched me go through the same thing as well. We get caught up in trying to be someone else's idea of “perfect.”

Rebekah Montgomery, PhD, a relationship psychologist based in Washington DC, says this is far more common in women than men. “Often women can feel responsible for the relationship or the connection, or like they need to be adaptable or flexible,” Montgomery tells Health. “Some of the messages we get as women of what it means to be a good partner or a good wife can make us more vulnerable to wanting to change ourselves to be accepted and loved.”

Curious about this dynamic, I reached out to relationship experts, who explained why people, especially women, feel the need to go into “contortions” for their partner. They also shed light on how to know if you’re doing just that and if you should stop.

Why do people change for their partner?

Almost everyone in your life has some level of influence over you—but that influence is particularly strong in intimate relationships, Eli Finkel, PhD, a psychology professor at Northwestern University in Chicago and author of The All-Or-Nothing Marriage, tells Health. Whether that influence is beneficial or harmful depends on how deeply your aspirations line up with your partner's, he explains.

Using Moore and Kutcher as an example, Finkel has this to say: “Does Demi’s ideal self align with Ashton’s ideal for her? If so, they’ll both push to move her closer to her ideal self. If not, there will be tension, with Demi aspiring to become one version of herself and Ashton wishing her to become another.”

In her memoir, Moore wrote at length about her struggles with alcoholism, including an admission that she started drinking again during her marriage to Kutcher to be the “fun, normal girl” she thought he wanted her to be. “Apparently, Demi and Ashton created a marriage that was much more Pygmalion than Michelangelo,” says Finkel. “And, with that information alone, we could have predicted that it would not end well.”

How can you tell if you’re changing for yourself or your partner?

Montgomery says to first ask yourself: Am I changing because I don’t feel good enough? Or because my partner is exposing me to exciting, healthy ways that I can use to challenge myself to grow?

If you’re changing because you don’t feel good enough, something isn’t right. Montgomery says that likely means you’re changing out of insecurity, not a genuine want to better yourself. “People can either be insecure about the relationship—maybe they feel like their partner won’t love them unless they change—or insecure about themselves, feeling like they aren’t lovable the way they are,” she says.

Next, ask yourself if you're changing in ways that are consistent with your values, or do the ways you’re changing make you uncomfortable?

If you’re sacrificing your values, that’s another red flag. Perhaps sobriety was one of Moore's values, yet her marriage to Kutcher steered her to abandon that. Maybe your values include a strong relationship with family and friends, and your partner is pulling you away from them.

Whatever the case, if you’re changing out of insecurity or in ways that don’t line up with your values, you’re not changing for yourself. You’re likely falling into the Pygmalion effect, as Finkel would say, which can doom your relationship, as it did for Moore and Kutcher.

What to do if you’re changing for the wrong reasons

First, find a way to rediscover with your authentic self. “There are certain activities and relationships that really connect us to ourselves,” says Montgomery. It could be meeting up with a childhood best friend or a group of girlfriends, or engaging in a longtime hobby, like yoga or painting, she suggests, adding, "These things help us feel grounded.”

Another activity that can help is journaling. It may sound cliché, but “everyone can get a little bit lost in their relationships sometimes,” Montgomery says. Journal about your relationship, the ways you’ve changed, and the person you really want to be.

You can tell your partner how you’re hoping to do things differently going forward and ask what they think of that. Maybe you also want to invite your partner to do something that’s more your thing, like spending time with your friends or skipping the party scene and spending more quiet nights at home.

How your partner reacts to this conversation should give you some clarity, says Montgomery. If they respect how you feel and are open to what you have to say, that’s promising. If they’re offended by your wanting to live more in line with your values and interests, it could be a sign that you two aren't as compatible as you thought.

“The very purpose of relationships is to feel like you are loved for your authentic self,” says Montgomery.