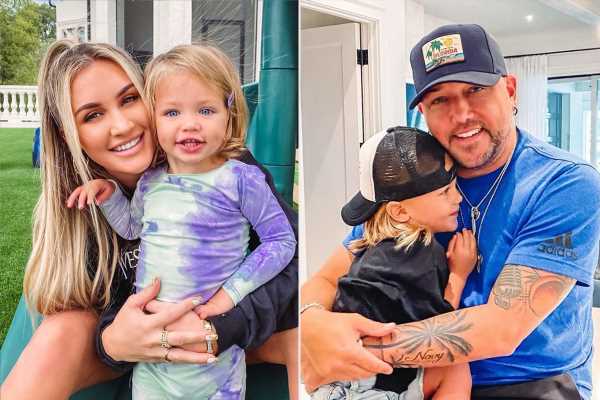 Jason Aldean's two youngest were almost planned to enter the world at the same time.

On Monday, the "Got What I Got" singer's wife Brittany shared a glimpse at their family's recent photoshoot, including their two little ones, daughter Navy Rome, 20 months, and son Memphis, 2½, plus Aldean's older daughters, daughters Kendyl, 13, and Keeley, 17.

"Christmas Card??🎄 I like the second one lol," she captioned the post on Instagram, also showing off a bit of a behind-the-scenes blooper wrangling the kids for the photo op.

In a subsequent post, Brittany, 33, revealed that she and Aldean, 43, almost chose to have Memphis and Navy at the same time during their in vitro fertilization (IVF) process.

"FUN FACT: Both of our babies are IVF babies. We almost put Memphis and Navy in at the same time because after our long infertility journey, multiples seemed AMAZING to me," she wrote. "I was talked out of it and Memphis was transferred first."

"How crazy to think that my babies who look almost identical could have been twins?☺️ This little cutie pie is… NAVY👆🏼😎," added Brittany alongside a photo of her daughter.

Never miss a story — sign up for PEOPLE's free daily newsletter to stay up-to-date on the best of what PEOPLE has to offer, from juicy celebrity news to compelling human interest stories

The Aldeans have previously been open about their struggle with infertility, the cause of which was Brittany's endometriosis, abnormal tissue growth inside the uterus that can inhibit conception.

Their decision to have two children close together was intentional, Aldean previously told PEOPLE.

"I would much rather knock it out now while we're used to having one in diapers and formula and all of that," he added. "I think it's tougher when you get out of that and wait a couple years and then have to go redo it all. … We just wanted them to be close in age, and we figured we're already in that mindset now, so why not?"

Her children are frequent guest stars on Brittany's Instagram, including one back-to-school snapshot of Memphis in which the proud mom raved about how quickly he's growing up.

"His backpack is full of all his girls (all Ana and Elsa) which he is now calling 'his girlfriends' …. breakin mamas heart😭," she captioned the photo, while in another post she called her daughter "my little pumpkin pie."