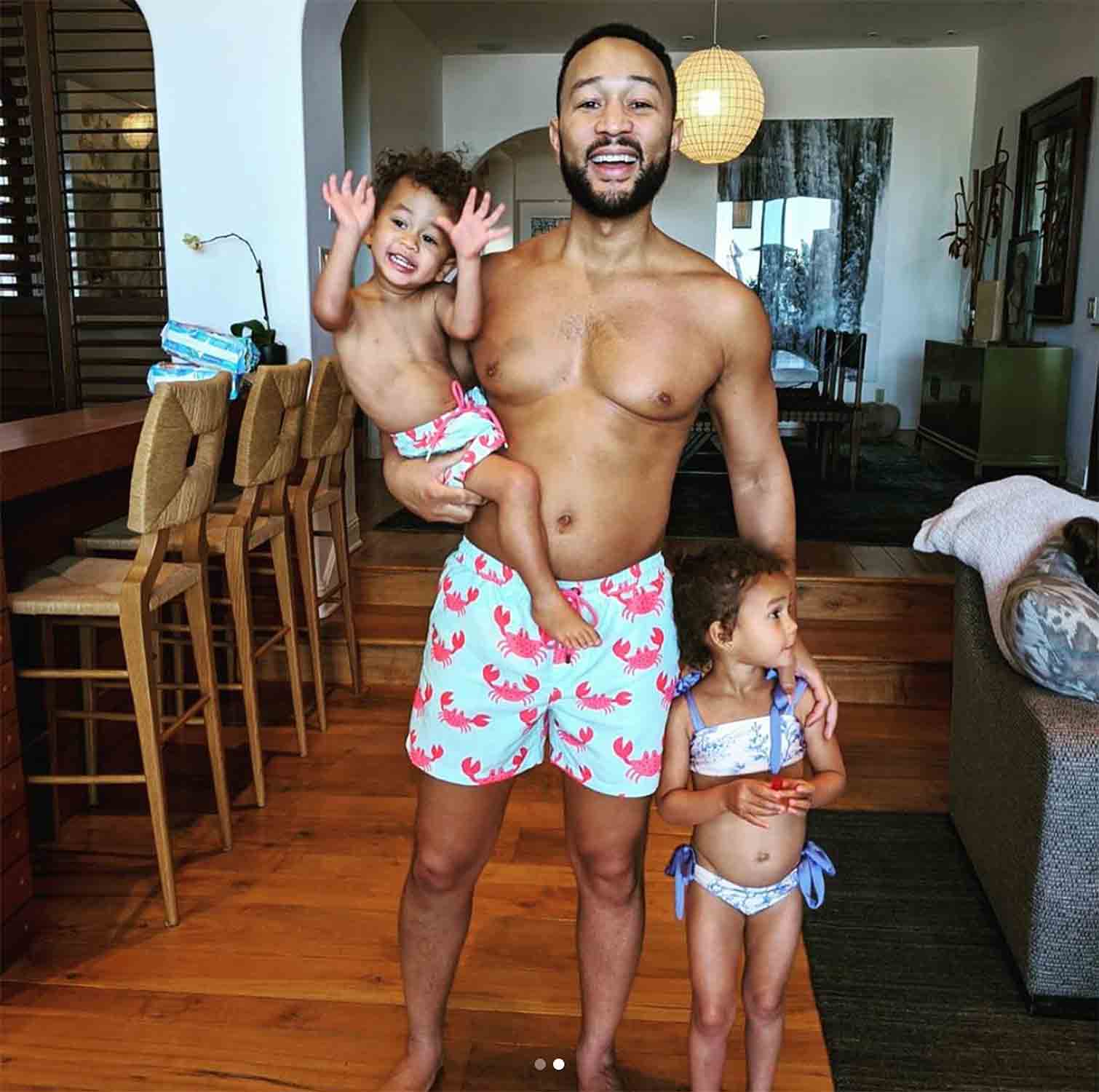 Despite their choice of attire, John Legend and his son Miles Theodore are anything but crabby.

The musician, 41, and his 22-month-old were two peas in a pod (or rather, crustaceans in a shell) in a recent photo op, where they rocked matching summer-worthy swim trunks featuring a crab print.

In the second photo, shared on Instagram Wednesday night by Legend’s wife Chrissy Teigen, PEOPLE’s reigning Sexiest Man Alive posed with both their kids, holding Miles in one arm and placing his other hand atop the shoulders of the couple’s daughter Luna Simone, who turns 4 next month.

Luna, meanwhile, sported a white and lavender two-piece swimsuit decorated with a floral print, seemingly more interested in something off-camera than smiling for the shot.

Teigen, 34, captioned the photos hilariously, “I have crabs.”

Amid the novel coronavirus (COVID-19) pandemic, Legend recently hosted a live show from inside their home alongside Teigen, who eventually joined in on the fun wearing a fan-voted “simple house towel” as her attire.

The model asked fans to weigh in on her livestream concert outfit by casting their votes through a poll she shared on Twitter Tuesday morning. “Simple house towel” beat out her more traditional clothing options of “pink mini,” “orange [dress]” or “sequin gown.”

Legend began his Instagram Live performance with Stevie Wonder‘s classic song "Love's in Need of Love Today." After concluding the tune, Legend revealed that he performed the same song when he auditioned to play the piano in what is now one of Lauryn Hill‘s hits, "Everything is Everything."

After the couple had a playful verbal sparring session, the singer continued his performance and played various requests. The duo even performed the theme song to reality show Vanderpump Rules and at one point, Teigen jokingly played the piano — using her butt. Their daughter Luna also made an appearance.

Legend, Teigen and their kids were the lucky recipients of a phone call from pal Ellen DeGeneres on Wednesday, when the daytime talk show host dialed a few of her famous friends to vent about her cabin fever while she practiced social distancing due to the coronavirus outbreak.

“Hey Chrissy what’s going on?” DeGeneres, 62, said to the Bring the Funny judge, who responded, “Nothing, just with the kids. Say hi, Miles!”

Teigen also shared the phone call on Twitter, captioning the clip, “Ellen does not know how to do nothing and it’s still pretty early in the isolation game.”