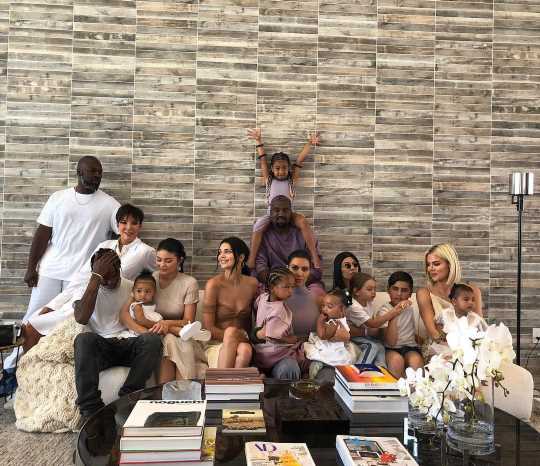 Earlier on Friday, Kendall Jenner shared a snapshot featuring the vast majority of the Kardashian/Jenner clan gathered for a group photograph on Easter.

Noticeably missing, however, were Rob Kardashian and his daughter Dream Renée, Kourtney’s daughter Penelope Scotland, and her children’s father Scott Disick — but the Internet was very quick to pick up on it.

Scott and Kourtney’s 6½-year-old daughter appeared to be the main focus of many fans, who voiced their concern for the little girl’s whereabouts. “Where’s Penelope?” asked one user, while another asked, “but where is P!?!?!?”

Others had similar sentiments, writing, “P is missing !! Where she at tho?” as another added, “…Kourt Missing A Kid Tho”

“I can’t wait for North’s blackbook to tell us why P isn’t in the photo,” joked someone else.

Meanwhile, some fans wondered where the lone male sibling of the Kardashian clan and his 2-year-old daughter were. “Rob and his kid ??” asked one person, as another shared how they “Miss Rob and Dream”

Of course, Lord Disick couldn’t be left out in the comments, either.

Scott, who has since split with Kourtney but remains very good friends with the family and peacefully co-parents his children, had fans questioning where he happened to be for the group photo. “Scot[t]’s missing and Rob Smh lol” said a fan.

RELATED: Gang’s (Almost!) All Here! The Kardashians and Jenners Pose for a Sweet Family Photo on Easter

So where were the missing family members?

Turns out Dream was celebrating Easter with her mom Blac Chyna and stepbrother King Cairo, 6½. Scott meanwhile, was in Mexico with girlfriend Sofia Ritchie.

As of Friday evening, however, Penelope, and Rob’s whereabouts were still currently unknown.

It does appear that Penelope may have chosen to sit the photo out after she was captured celebrating the holiday alongside her aunts at Coachella Valley Music and Arts Festival on Sunday. Penelope also appeared on Kim’s Instagram Stories that day.

Most of the family was together for the Easter holiday, which they celebrated in part by attending West’s Sunday Service for fans and the faithful during the second weekend of the music festival.

The rapper, 41, began his gospel service as his family — including wife Kim and her sisters Khloé, 34, Kourtney, 40, Kylie, 21, and Kendall — plus friends Chance the Rapper, Kid Cudi, 2 Chainz and Teyana Taylor took center stage. And North was once again a scene stealer as she was seen dancing on the hill.

Kim, 38, shared footage of her meeting up with her family ahead of the service, including sisters Kendall and Khloé, who both wore neutral-colored slip dresses.

Meanwhile, Khloé (who opted for a silk dress with classic Timberland boots for the holiday celebrations) shared an adorable video of True, whom she shares with ex-boyfriend Tristan Thompson, happily babbling as she sat before her many Easter baskets.