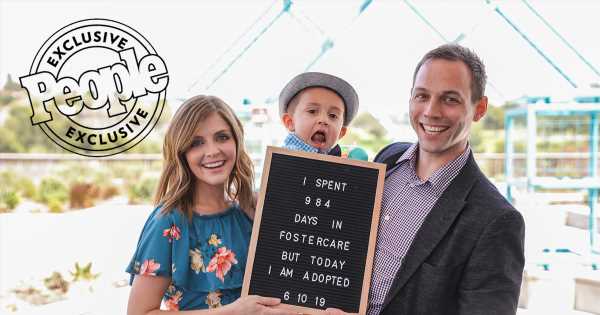 As a soon-to-be mom of three, Jen Lilley has a lot to celebrate these days.

The pregnant Hallmark Channel star, 34, and her husband Jason Wayne threw a big bash to celebrate their 2½-year-old son Kayden’s official adoption on June 10, sharing exclusive photos with PEOPLE from the exciting event.

“Our theme was ‘We Found Our Missing Piece’ because Kayden loves puzzles and has always been exceptionally gifted at putting the pieces in order, and he fits right into our family,” Lilley tells PEOPLE. “My mom catered the event, putting her heart and soul into all the details.”

“We also made a video message for Kayden that he can watch over and over again, especially when he’s older, telling him how much we love him and value him and are so grateful he’s in our family, complete with photos and video footage of him since he first arrived in our home almost three years ago as an infant,” she adds.

Held at the COOP in Los Angeles, the event was chock full of puzzle decorations, games, balloons, a ball pit, a bounce house and even a colorful custom puzzle-piece-decorated cake by Drea’s Wonder Cakes.

“We also got him adoption-day presents and will continue to celebrate June 10 every year,” says Lilley. “It was a particularly touching date for me, because June 10 is my parents’ wedding anniversary, and they got the best present ever for their 41st!”

Of the “long-awaited and monumental” adoption itself, the Days of Our Lives actress admits she “almost lost it” at the moment when Kayden was legally named a member of their family.

“During the hearing, when the judge said Kayden was declared to be our legal ‘child, and is further said to be a member of the Wayne family with all the rights and responsibilities attached thereto,’ I almost lost it,” Lilley recalls. “All I could manage was a little half giggle/half sob, saying, ‘Thank you.’ “

Lilley — who’s expecting a baby girl with Wayne and is also mom to a 14-month-old son via foster care — says the “long and emotional journey” is “worth every tear and uncertainty.”

“The goal of foster care is to reunite the children with their birth families, but sometimes that’s not a safe option for the children,” she tells PEOPLE. “And while it’s easy to sit in the seat of judgment, the truth is the birth families who can’t pull it together are hurting and broken, and need as much love and affection as the children they abused or neglected.”

“We are so over the moon that we get to call Kayden our own,” Lilley adds. “We’ve loved him from the moment he entered our home and we’ve treated him as our own son since day one, but to have it be official is overwhelmingly wonderful. Jason and I hope and pray we can be the parents our children need and I hope when they’re older, we can find a healthy way to reintroduce them to their birth families.”

Meet the HGTV Star (and Father of Six!) Who Adopted Four Children with Special Needs

While “Kayden did not understand the significance of the day,” Lilley tells PEOPLE “he did understand that we were all there celebrating him, and that it was his big party.”

“I’m really hoping Jason and I can explain to Kayden and any other child we’re lucky enough to adopt how much we love them, and give them a positive perspective of adoption,” she says. “We know once children understand they’re adopted, they often go through a grieving process for the birth family they’ve lost even if they lost that family in infancy, but we’re hoping we can not only walk through that process with them and comfort them but help them view adoption as an addition, not a subtraction.”

“They have two moms who deeply love them and two dads who want the best for them,” Lilley continues. “It’s not going to be easy, and I am open to any tips adoptive parents can provide, especially foster-to-adopt parents since it’s such a tricky and murky backstory.”

“If you think our hands are full with two kiddos and one on the way, you should see our hearts,” she adds.