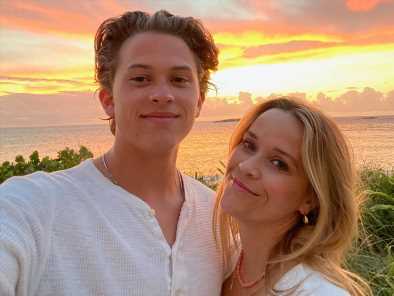 Reese Witherspoon has raised some pretty great kids over the years.

On Saturday, the Oscar winner, 45, posed in a sweet sunset selfie with her 17-year-old son Deacon. "Not enough words to say how much I love this guy," she raved in the caption. "The way he looks at the world inspires me everyday @deaconphillippe."

Witherspoon shares Deacon and daughter Ava, 21, with ex-husband Ryan Phillippe, 46, whom she married in 1999 after they starred together that year in Cruel Intentions. They announced their separation in 2006, before finalizing their divorce in 2008.

The mom of three got candid about becoming a mother when her career first took off, as she appeared on The Drew Barrymore Show in September. "To be completely candid, I was terrified too. I got pregnant when I was 22 years old, and I didn't know how to balance work and motherhood, you just do it," she said. The Legally Blonde star noted that she "didn't have any real power or leverage within my industry" at the time. "I didn't know if I was going to have steady work, too," she continued. "I made movies but I hadn't established myself as someone who could demand that it shoot close to my kids' school."

She also shares son Tennessee James, 9, with Jim Toth, 51, whom she married in 2011. She and the talent agent celebrated their 10th wedding anniversary last weekend.

Want to get the biggest stories from PEOPLE every weekday? Subscribe to our new podcast, PEOPLE Every Day, to get the essential celebrity, entertainment and human interest news stories Monday through Friday.

Witherspoon paid tribute to her husband on Instagram, posting a photo from their wedding day. "What a special day with all of our dear friends," she recounted of their nuptials. "Looking back, I can't believe it has gone so quickly!"

"I guess that's how it goes with 3 kids, Big LOVE, lots of laughing, non- stop travel, so many dogs, and fun adventures… figuring out this crazy world together. Here's to many more days in the sun! I ❤️ you, JT," she wrote in the caption.