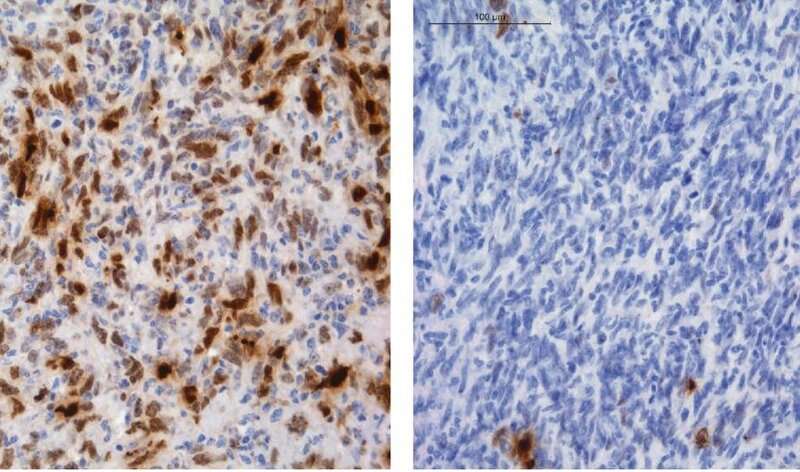 A team led by Massimo Squatrito, Head of the Seve Ballesteros Foundation Brain Tumor Group at the Spanish National Cancer Research Centre (CNIO), has made important findings of how some gliomas can acquire chemoresistance. Carried out together with the laboratory of Jiguang Wang from the Hong Kong University of Science and Technology (HKUST) and a clinical team led by Tao Jiang from Beijing Neurological Institute, and published in Nature Communications, the study provides new clues on how to monitor the efficacy of therapy.

At present, the main, and virtually only, treatment for glioma—a very common type of tumor originating in the brain—is a combination of radiotherapy and the chemotherapy agent temozolomide. This type of treatment can improve patients’ survival rates by up to 30%. Similar to most of the chemotherapy drugs, temozolomide induces DNA damage in cancer cells. Gliomas can progress by repairing this damage through an enzyme encoded by the MGMT gene. In patients whose MGMT activity is blocked because of a modification of its promoter called ‘hypermethylation’, cancer cells cannot repair the temozolomide-induced damage and collapse.

Unfortunately, up to 40-50% of patients are intrinsically resistant to temozolomide. These patients express high levels of MGMT and the tumor continue growing under treatment. Now, the recent study carried out by the CNIO and the HKUST team shows that a subset of patients acquires a specific genetic alteration that can evade the combined therapy.

“Translocation of the MGMT gene was observed in a group of patients,” says Massimo Squatrito. “These genomic rearrangements involve the fusion of MGMT with other genes, which means that MGMT is now regulated by the promoters it is fused with, that contributes to its overexpression. When this type of rearrangements take place, the temozolomide-induced DNA damage is very efficiently repaired and the glioma continues growing even under treatment.”

The team at the HKUST validated the presence of the genetic rearrangement in a subset of a large cohort of recurrent tumors, coming from different hospitals, mainly from Beijing Tiantan Hospital. Using the CRISPR-Cas9 genomic editing tool, the team at CNIO replicated some of these translocations in different cell and animal models and confirmed that they can confer resistance to temozolomide. “It appears that the translocations are not present in the original tumor, only in recurrent ones, that are, tumors that emerge after the original cancer is treated,” Squatrito says. “This indicates that the resistance may occur as a consequence to the treatment itself.”

The findings may lead to changes in the methods to monitor therapy efficacy: “Currently, the only known therapeutic biomarker in gliomas is the analysis of MGMT promoter status. When methylated, the MGMT gene is silenced and the patient is predicted to respond to temozolomide. The study shows this method is no longer valid when there has been a genetic translocation. The promoter might still be blocked, but the gene is being overactivated by other promoters and hence could contribute to tumor recurrence.”

Another relevant finding from animal models is that the MGMT translocations are present in exosomes—extracellular vesicles released by glioma cells into the bloodstream. “If this finding is validated in patients, it could become a useful tool for early resistance detection. A liquid biopsy, that is, a simple test using blood samples, could tell us when patients are developing resistance to temozolomide, and they could be advised to switch to other therapeutic options when they will become available.”