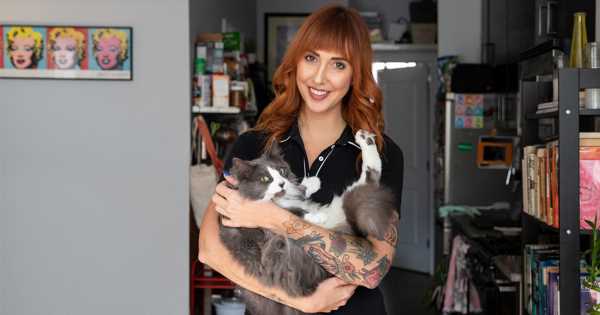 Just before we rang in 2019, we met a cat who was in a desperate state—homeless and severely injured, he needed emergency care to save his life. The three-year-old male cat, then known as Merry, was rushed to the ASPCA Animal Hospital after reportedly being hit by a car. Upon seeing Merry’s condition, our veterinarians knew they needed to act quickly to save him. 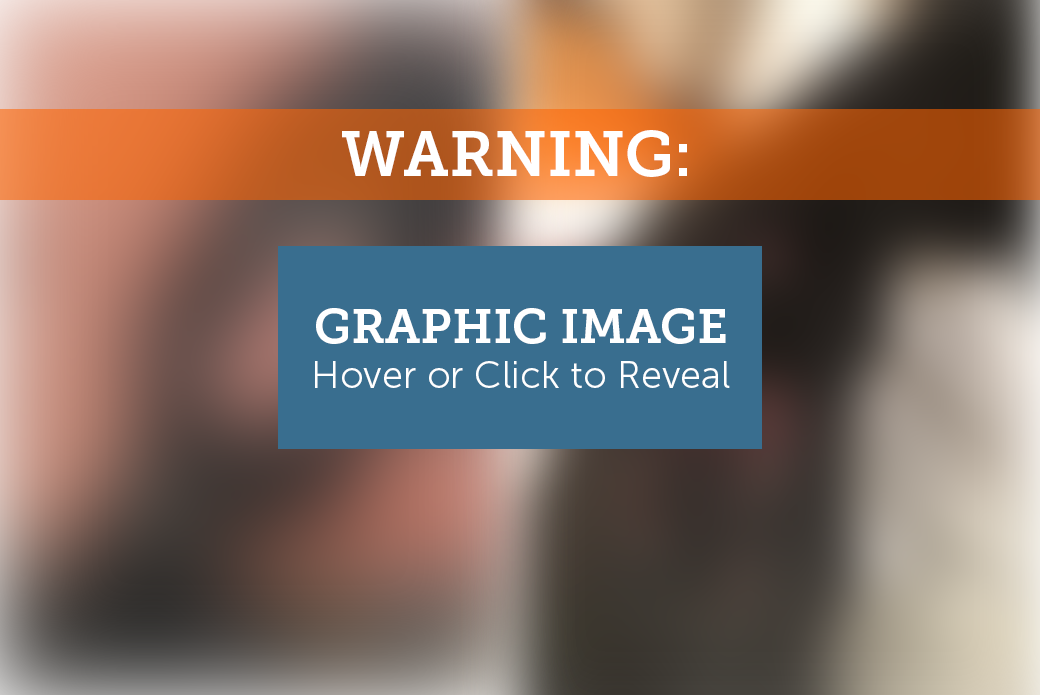 “It was very gruesome. Merry was one of the worst cases, if not the worst, I’ve seen of a survivor of being hit by a car. He was in really rough shape when he came in,” explains Dr. Melanie Glass, ASPCA Veterinarian. “He had sustained head trauma, trauma to his mouth and eye, and had a really bad fracture of one of his back legs that left his femur exposed and open. He was in shock and it was very clear that he needed a lot of help immediately.”

Fortunately for Merry, quick action and the skilled response of the Hospital’s team gave him a second chance. Sadly, though, Dr. Glass and the veterinary team were forced to make the difficult decision to amputate his injured leg quickly due to the severity of the fracture. From there, they also wired his jaw to help fix the fracture. 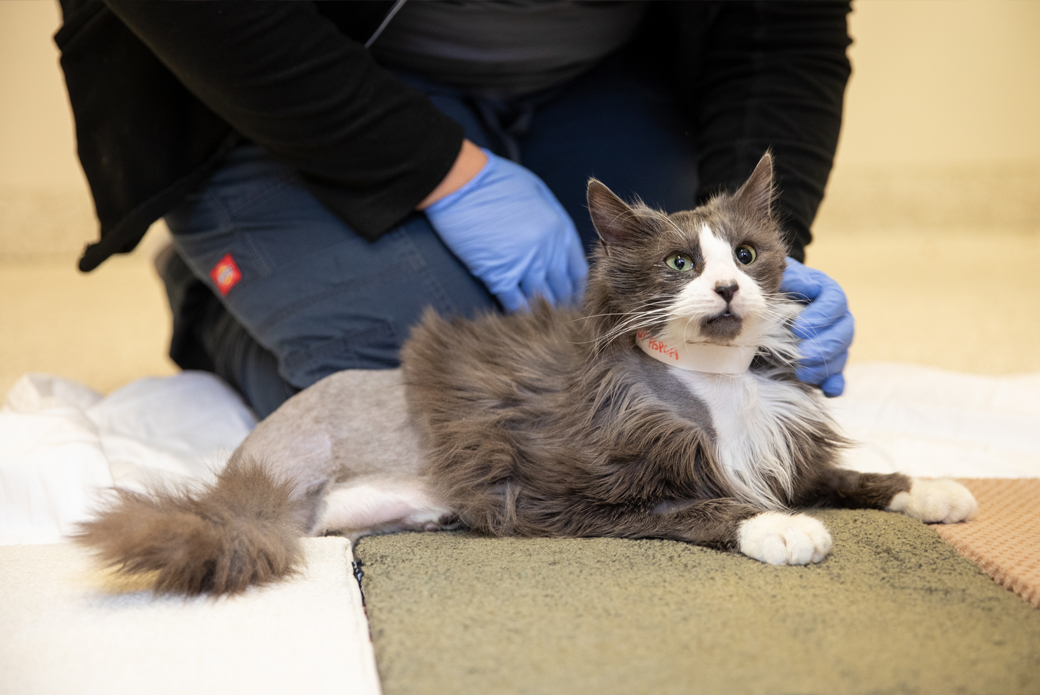 Following Merry’s surgery, there was some concern about his ability to walk and support himself on his remaining back leg. His mobility remained extremely limited at first, but the veterinary team never gave up hope.

“Overall, he was such a loving cat—he was so happy to eat and play and get pets,” says Dr. Glass. “He clearly was enjoying his life and was able to get around quite well in his enclosure, so we had a good sense that even though he would have some challenges, they were very minor in the grand scheme. We were confident he could adapt and live with those challenges.” 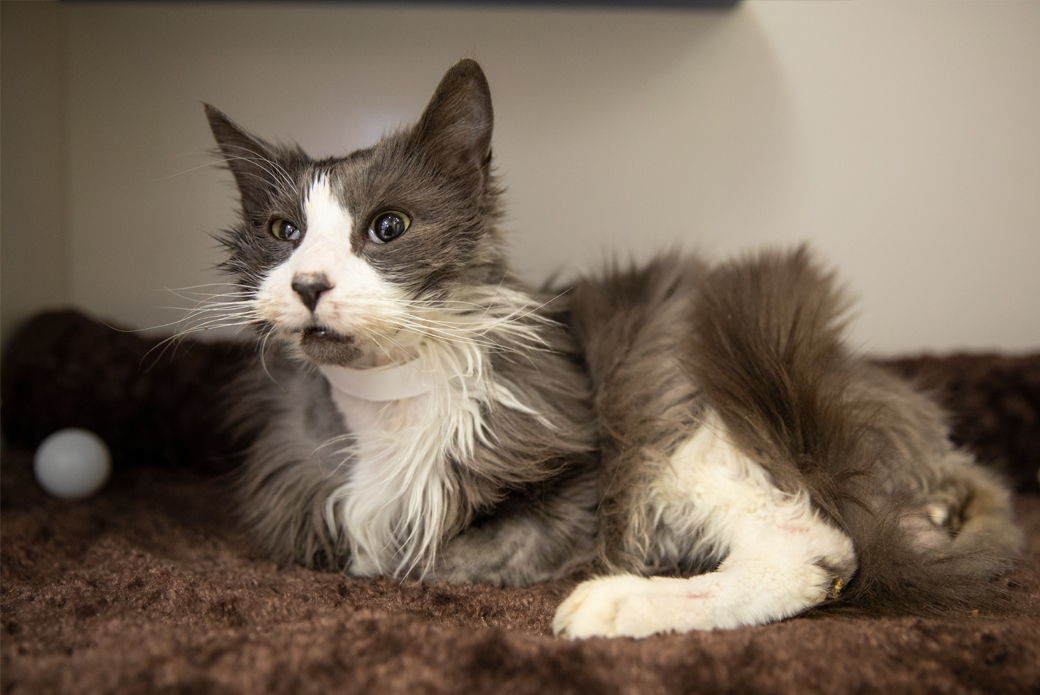 Once Merry was stable, he was able to move out of the Hospital, to a space in the ASPCA Adoption Center where Dr. Glass was able to monitor his recovery. Like Dr. Glass, other staffers at the Adoption Center adored Merry, and found him to be sweet and compliant—he was thankful and happy to be alive and he deserved a home that would always remind him how special he truly was.

About a week after his arrival to the ASPCA, as he began to heal, Merry met someone else who would soon play a significant role in his life.

Amanda Bova, a Manager on the ASPCA’s Membership team, was working at the Adoption Center in January 2019. On that particular day, she was following Adoption Center staff and veterinarians as they checked on the animal residents. 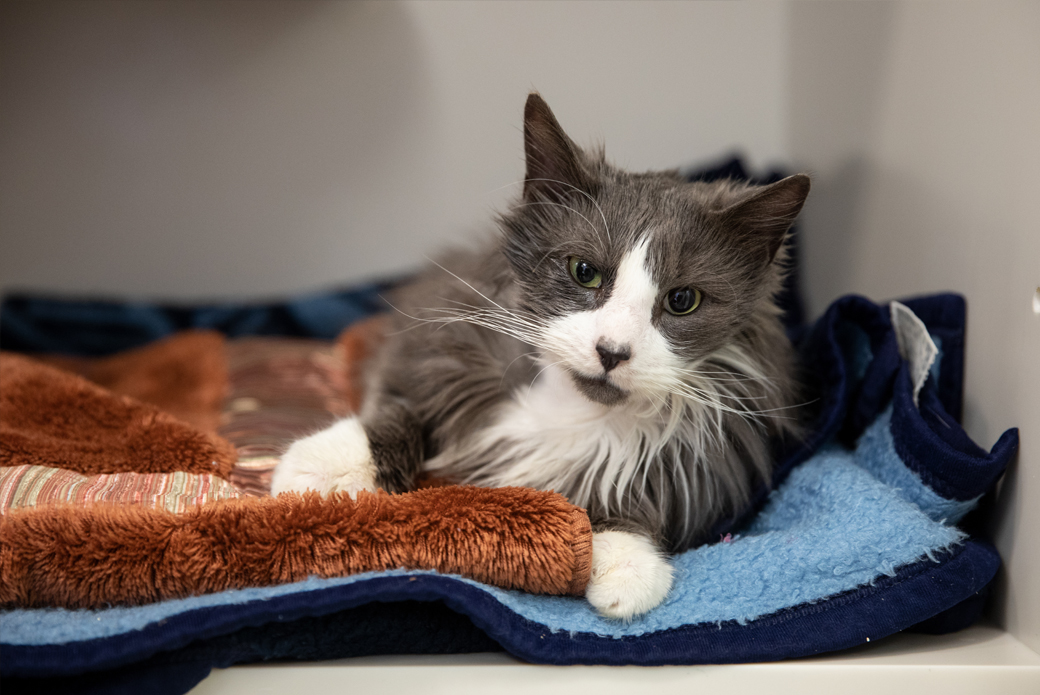 As they made their way through the Adoption Center, Amanda found herself in a room with a few medically compromised cats. And as she peered into the enclosures, she was struck by a gray-and-white cat looking back at her.

“He had just gotten his leg amputated, his jaw was wired shut, he was missing fur everywhere—it was a pretty sad sight,” she remembers. “I saw the reaction of the veterinarians as they explained his condition and what happened to him, and it was very sad because they weren’t sure about his ability to walk and they were concerned. And it really moved me.”

A few days after that, Merry was well enough to move into a foster home. Veterinarians were hopeful, based on the progress he was making, and knew that a comfortable home with a foster caregiver would give Merry the time and space he needed to make a full recovery. 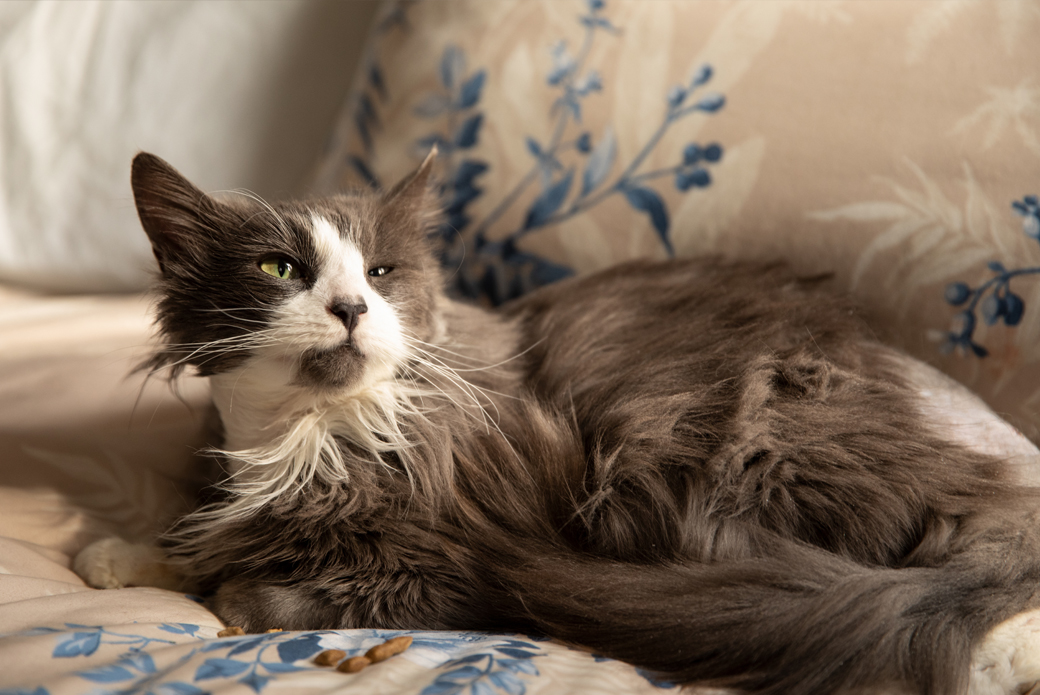 Merry in his foster home during his recovery.

As time went by, Merry got stronger and his mobility improved. Amanda kept an eye on his progress, and by the time she found out he’d be available for adoption soon, she knew her decision had already been made.

“By that point, I’d been thinking about Merry for a month or so,” she tells us. “I was emotionally invested in his recovery and I felt so strongly about his outcome that I knew I couldn’t let someone else take him home. I knew I could give him what he needed after such a traumatic ordeal.” 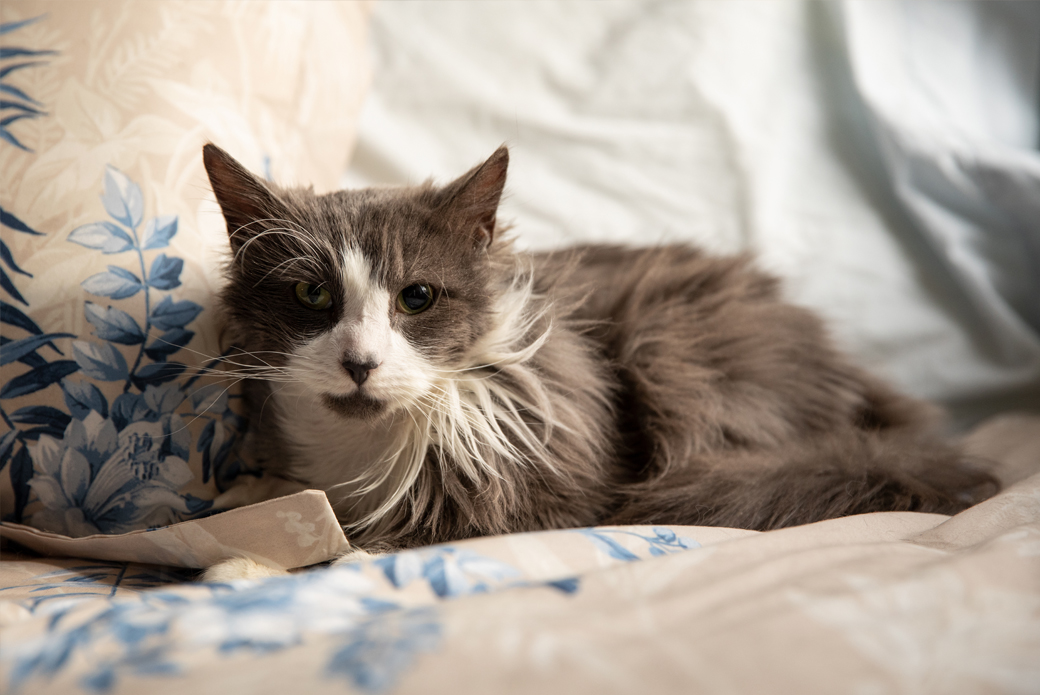 When Merry returned to the ASPCA in February to have the wire in his jaw removed, Amanda went to visit him. She was no stranger to special-needs animals—her resident cat, Twiggy Stardust, is a former cruelty victim and fellow tri-pawed cat—and she felt like her home was the right place for Fin’s journey.

“I’d been thinking of getting a second cat for some time, and he was so calm when I saw him and seemed so grateful to be alive. It broke my heart to think of how broken he was, but it made me love him even more,” she says. 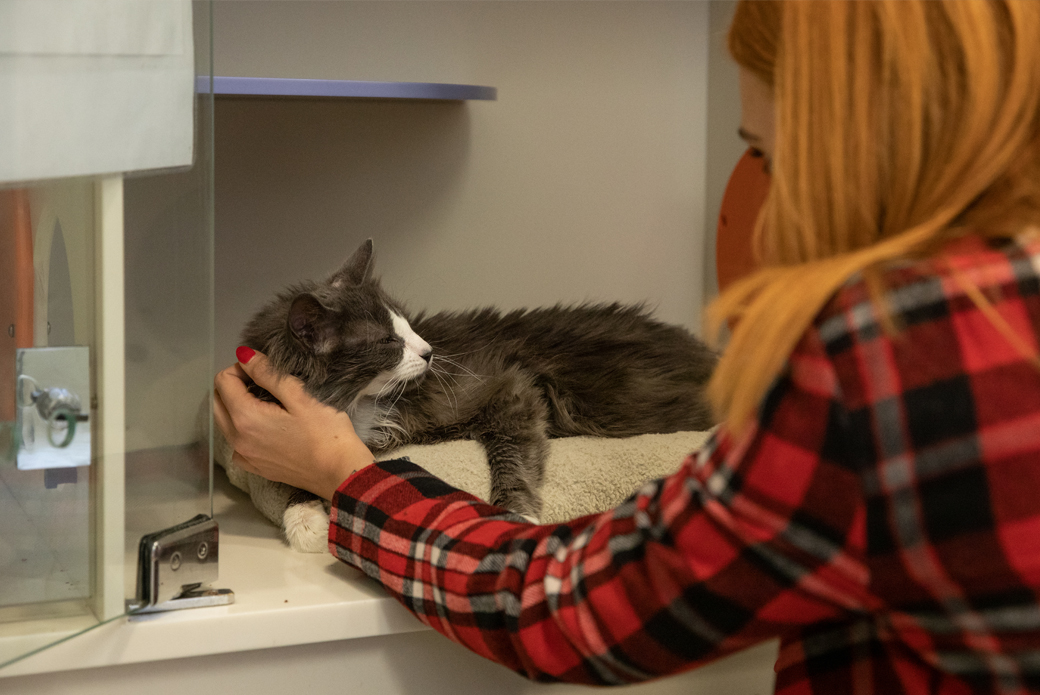 Amanda, alongside her roommate Marlee, made the adoption official in March 2019. After a long and tough recovery, Merry was finally going to a home of his own. 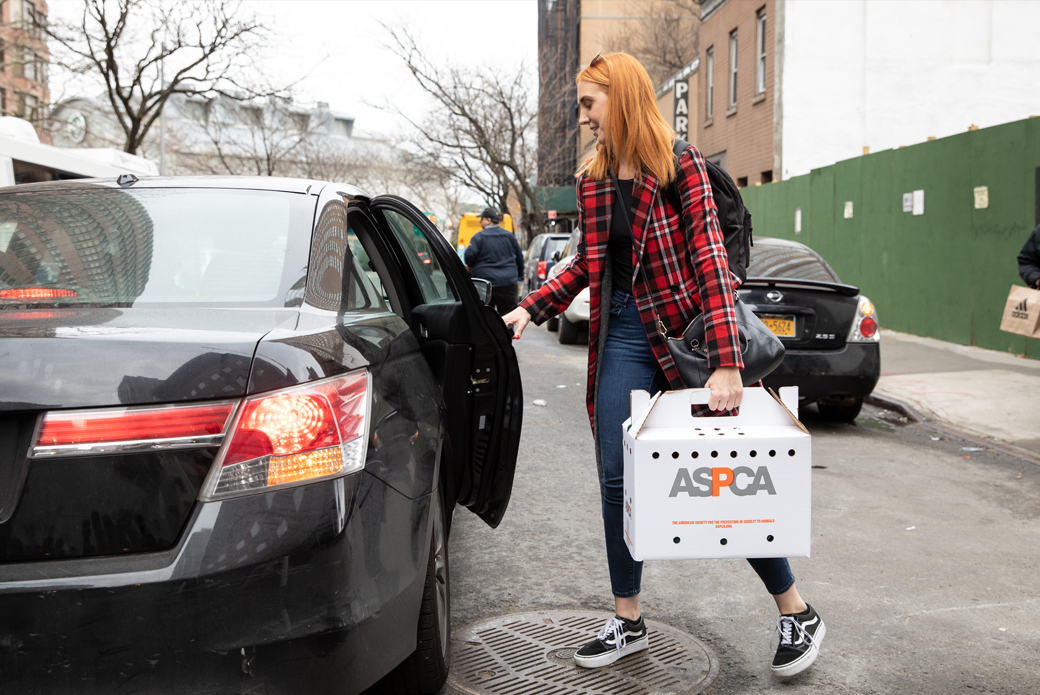 Following his adoption, Amanda changed his name to Fin, though his official title is Sergeant Odafin “Fin” Tutuola, after one of her favorite television characters.

“My roommate and I are big fans of Law & Order: Special Victims Unit, and we went through this big, crazy list of names before going to adopt him, but we kept coming back to that character and it just seemed to fit,” Amanda says with a laugh. “He’s a tough cat and he deserved a ‘tough guy’ name. That name has only become more appropriate as time goes on because he’s the ultimate tough guy, but he’s very funny. He comes in and owns a room, but he also has a heart of gold.” 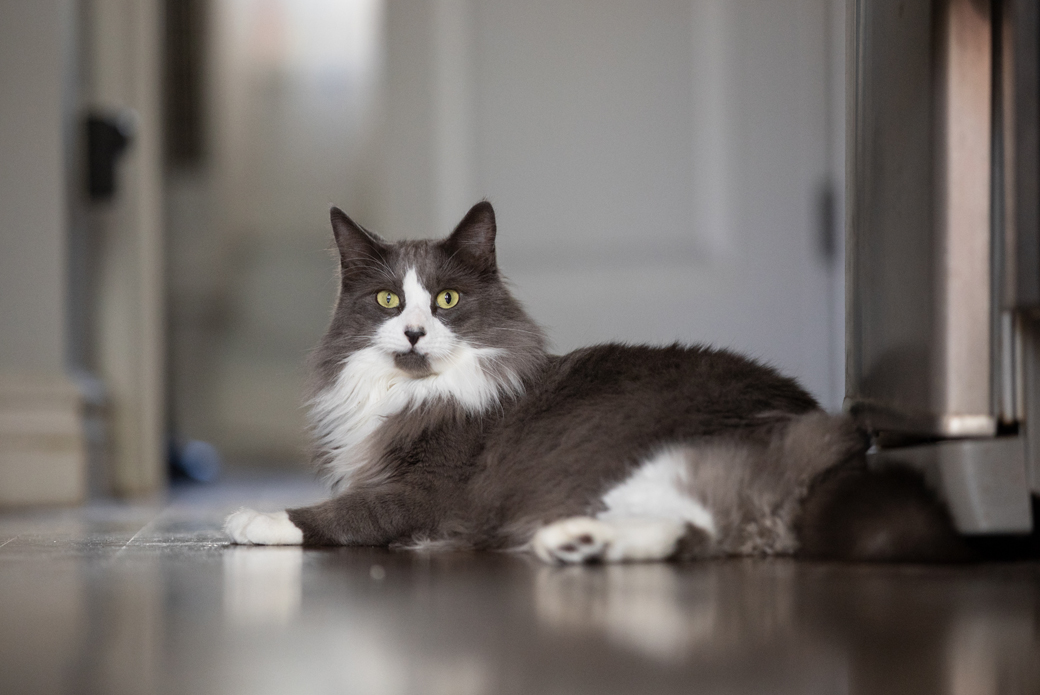 But bringing Fin home to an apartment with a resident cat and dog was harder than Amanda anticipated. In addition to adjusting to his new home and family, Fin was also still adjusting to life as a tri-pawed kitty. Luckily for Fin, his new mom was always there to help—even when he didn’t want it.

“I’d help him get up and down off the furniture because I was worried about how strong his remaining back leg was. But he hates being picked up, so I had to sort of learn when to back off and let him assert his independence on his own,” she says. “It’s that independence and determination that makes me fall more in love with him—he’s beyond resilient.” 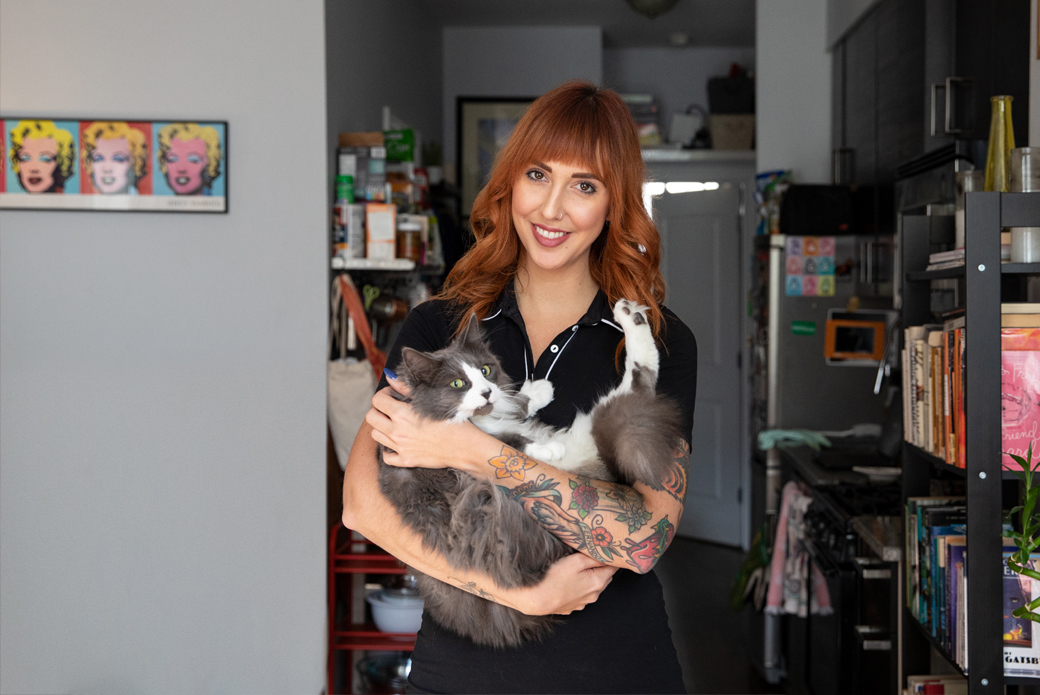 Fin’s accident also left him with nerve damage in his eyes; he is unable to close his right eye fully. This requires Amanda to apply an ointment twice a day, every day, but she says she’s noticed that he’s able to close it more now than he could in the beginning. 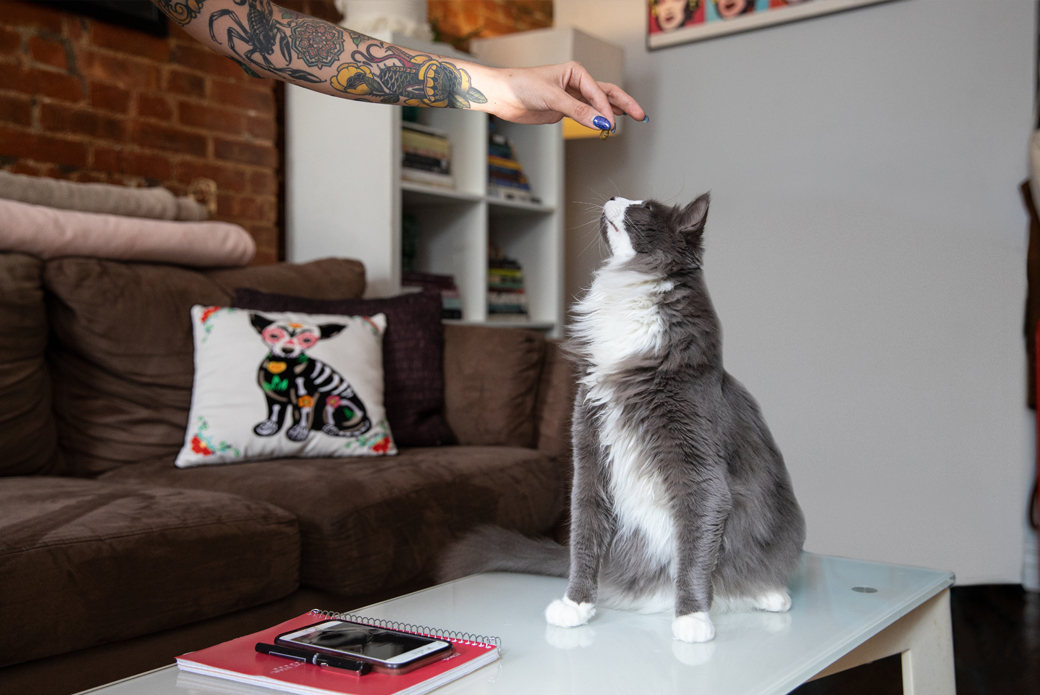 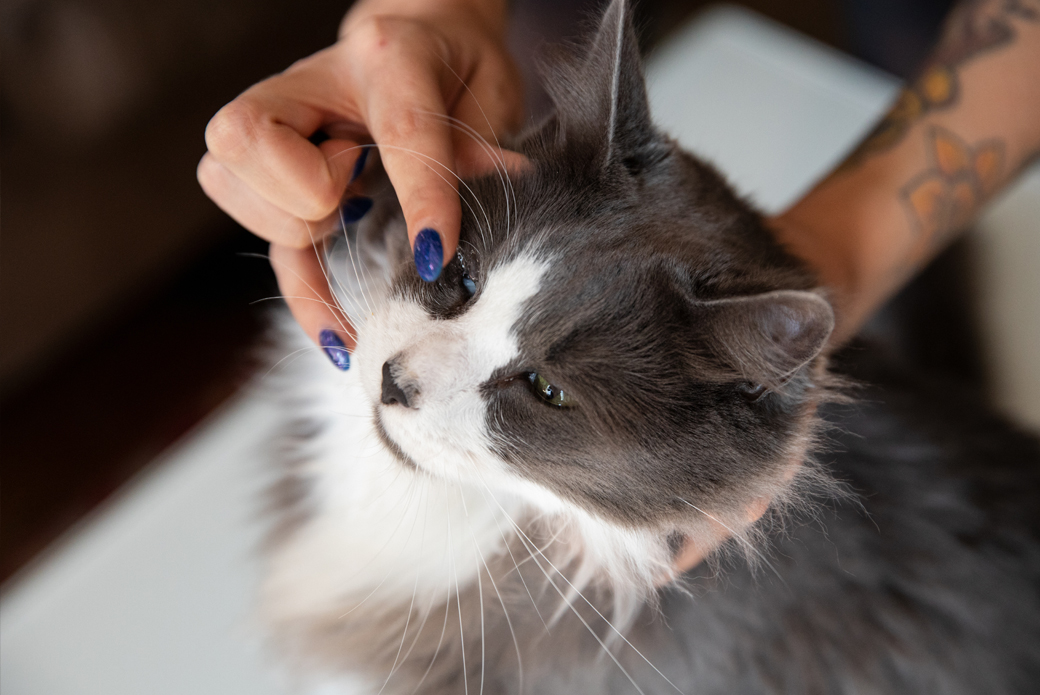 There were issues beyond his physical ailments that initially worried his new mom.

“I think after everything he went through, this was the first time he was healthy and able to really be a cat,” says Amanda. “He had big food insecurities—he would take food from his bowl or from the other cat’s bowl and he would hide it in our shag rugs and go back and get it later. There was a lot of that, a lot of rough play with us, just a lot of adjusting and getting to know each other.” 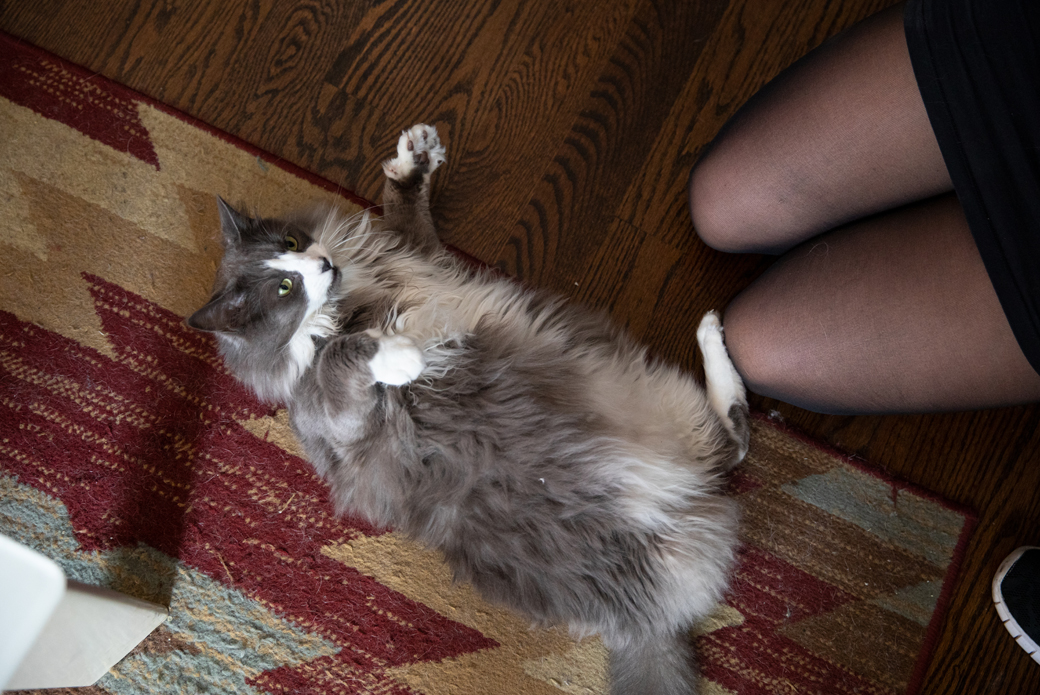 Amanda remained vigilant as Fin settled in, helping him if he fell or cleaning up after him when he would accidentally make messes.

“For a long time, I worried about Fin’s ability to connect with me as his guardian. He didn’t want a lot of affection from me, he didn’t want to sleep in my bed or in my room at night,” she says. “My other pets are incredibly affectionate and rather ‘needy,’ for lack of a better word, and Fin has this sort of indifference that was something I didn’t know how to approach at first.”

For Fin, patience was key. Little by little, day by day, as Fin began to heal emotionally from his traumas, he began to trust Amanda—and as a bonus, he was looking better than ever. “The most rewarding part of adopting Fin is just seeing how far he’s come,” Amanda says when asked about Fin’s life now. “Of course, physically, I look at him and it makes me tear up sometimes because he just looks so much better—he’s such a handsome boy. But also, he doesn’t hide his food anymore, he feels comfortable, he knows he’s going to be fed—he feels safe here. So, seeing that and seeing him learn to trust me as his mom has been incredibly rewarding.” 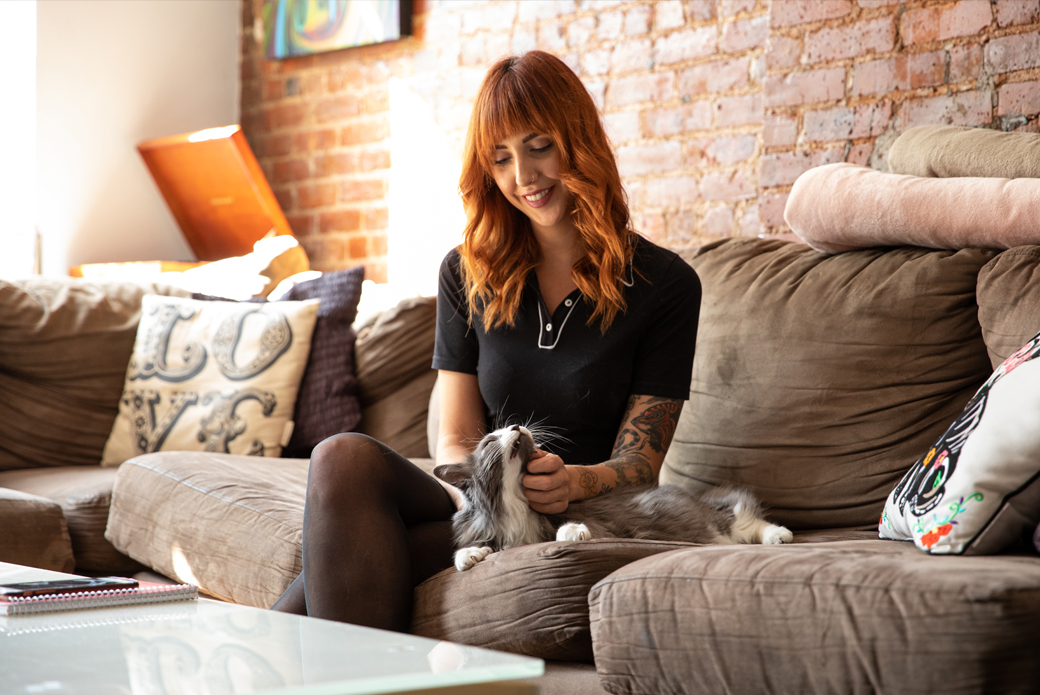 Fin, Twiggy and Amanda’s Chihuahua Fernando have figured out their routine as a family for the most part, and she tells us that life is better than ever.

In his home, Fin gets spoiled with plenty of love from Amanda, her roommates and any visitors they may have. He loves to greet new friends by the door and gets most excited when it’s time for food or tasty treats. Twiggy has learned to share her bird-watching window, though Amanda tells us that the two cats still have a classic brother-sister dynamic. 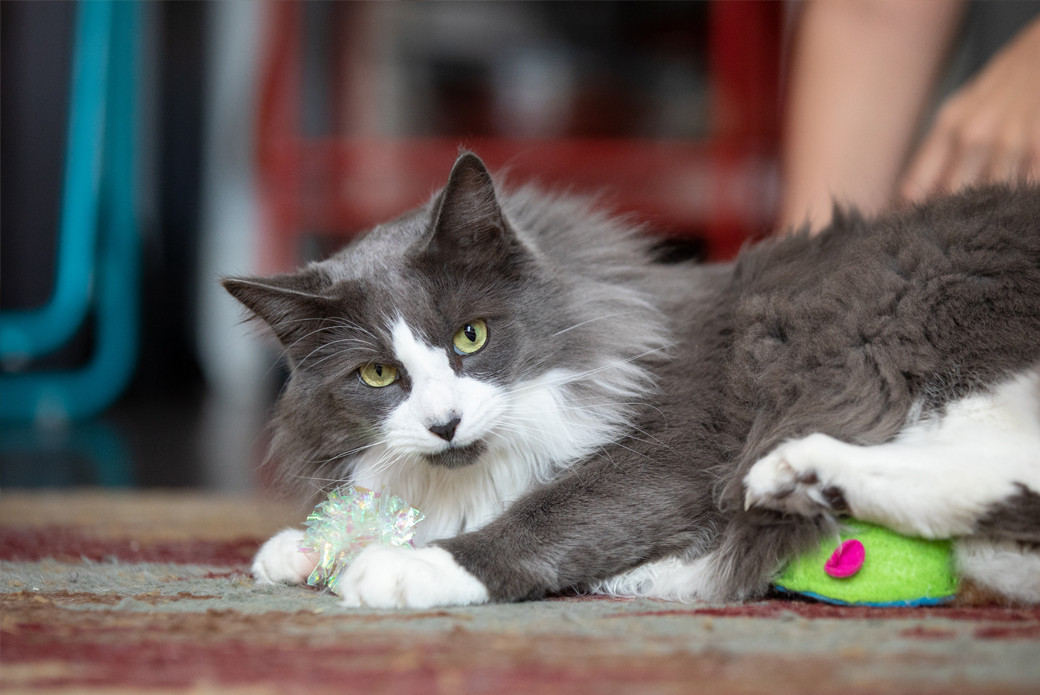 “Fin doesn’t let anything slow him down,” Amanda says. “He tries to keep up with Twiggy and chase her, but he’s not as agile and graceful as she is, so he’ll slip sometimes and just sort of pull a ‘cool guy’ move and act like nothing happened. He’s constantly making us laugh. 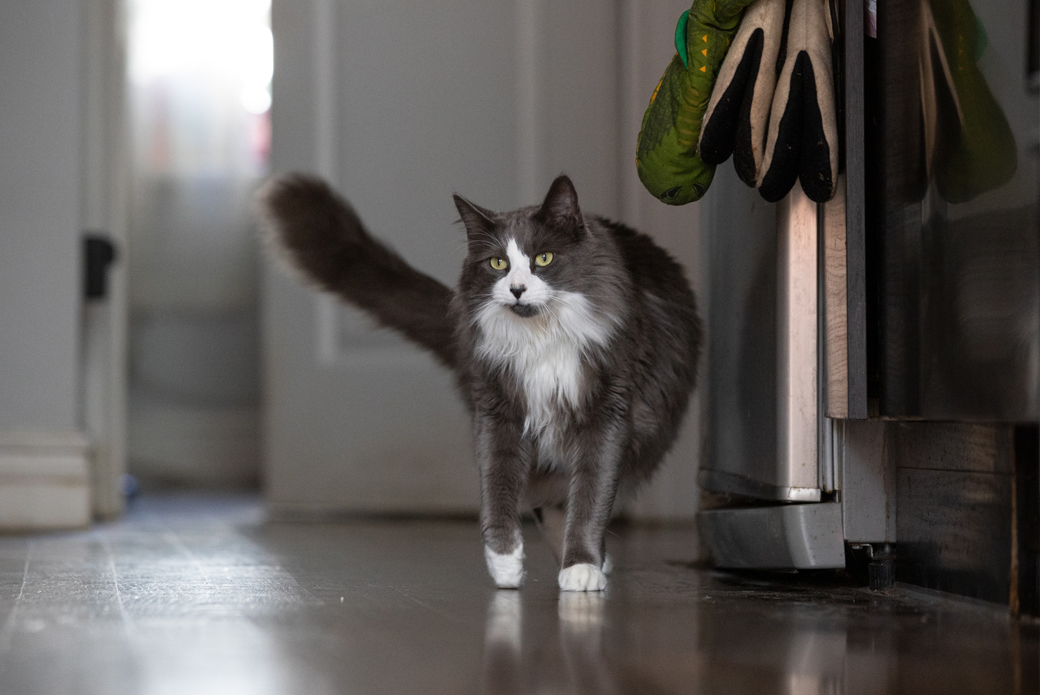 When asked about what advice she’d have for someone considering adopting a special-needs animal, she had this to say: “Have an open mind and an open heart. Give them a chance; don’t look at them like they’re any different from any other animal. Because they are still a beautiful, loving being who just wants a home.”

This November, remember happy animals like Fin and consider bringing a special-needs animal into your home and your heart. Visit or contact your local rescue or shelter today!