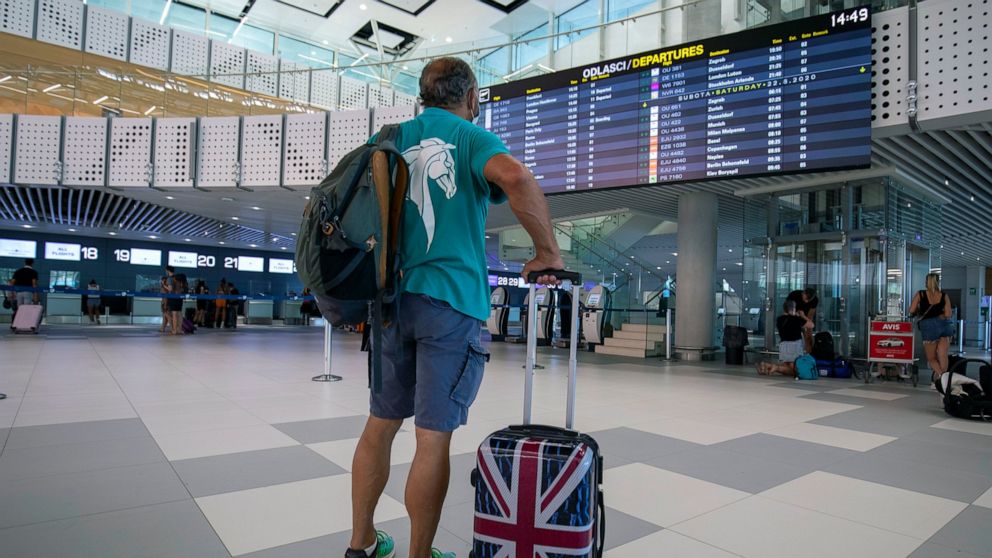 LONDON — Airlines and holiday providers on Friday expressed frustration with the U.K.’s plans to ease travel restrictions, saying uncertainty about how and when the new rules will be implemented make it difficult for people to book summer vacations.

The government on Thursday expanded its “green list” of safe travel destinations, allowing people to visit without having to self-isolate for 10 days after returning to Britain. However, all but one of the new additions were also placed on a watchlist, meaning the quarantine requirement may be re-imposed at short notice.

Transportation authorities also said they intend to relax travel restrictions by allowing fully vaccinated travelers to visit higher-risk destinations, including the U.S. and most of the European Union, without having to self-isolate. They expect to implement this change “later in the summer.”

“The U.K. has already fallen behind the EU’s reopening, and a continued overly cautious approach will further impact economic recovery and the 500,000 U.K. jobs that are at stake,” said Shai Weiss, chief executive of Virgin Atlantic, which offers mainly long-haul flights to destinations such as New York, Los Angeles and Barbados.

Airlines and hospitality companies have pressured the government to ease travel restrictions imposed to slow the spread of COVID-19 following the U.K.’s successful vaccination program. The pandemic has devastated Britain’s travel industry, with the number of people flying through London’s Heathrow Airport, the nation’s busiest, plunging 73% last year.

The government has created a traffic light system to manage the reopening of air travel. Destinations with low levels of COVID-19 and high levels of vaccination are placed on the “green list,” which allows pleasure trips and doesn’t require self-isolation on return to Britain. Only essential travel is permitted to “amber list” countries, but travelers must self-isolate for 10 days when they return home. The government has banned most travel to destinations on the “red list,” and anyone arriving from one of these countries faces a 10-day quarantine in a government-approved hotel at their own expense.

The lists are updated every three weeks.

The Department for Transport said Thursday night that the expansion of the green list and plans to ease restrictions on fully vaccinated travelers were the result of the successful vaccination program. Almost 61% of U.K. adults are fully vaccinated, and 83% have received at least one dose.

“It won’t be quite like it was in 2019 and the old days, but we are moving in a positive direction,” Shapps told Sky News.

Public health authorities are concerned about the possibility that travelers may spread potentially more dangerous variants of COVID-19 to the U.K. from countries with low vaccination rates. The delta variant, first identified in India, has already become the dominant version of the virus in Britain.

Regardless of U.K. policy, officials in the European Union are considering imposing a quarantine on British travelers because of their concerns about the delta variant which is 40% to 60% more transmissible than previous versions of COVID-19. In minutes released from government meetings earlier this month, experts said the delta variant also may be linked to a higher risk of hospitalization, although “numbers are still small” and there is no evidence the variant is more deadly.

Diana Holland, assistant general secretary of the Unite union, said the government needs to change its approach to provide greater certainty for the travel industry and consumers.

“The traffic light system is simply not fit for purpose,” she said. “It is impossible for a multibillion-pound industry to make plans for the future when the rug can be pulled from under them every three weeks.”

The government on Thursday added more than a dozen countries and territories to its green list, including the popular holiday destinations of Malta, Madeira and the Balearic Islands. All of the destinations except Malta were placed the watch list.

The changes, which take effect at 4 a.m. June 30, will expand the green list to 27 countries and territories.

Britain also added six countries to the red list, including the Dominican Republic, Haiti and Uganda. That brings the number of countries covered to 56.