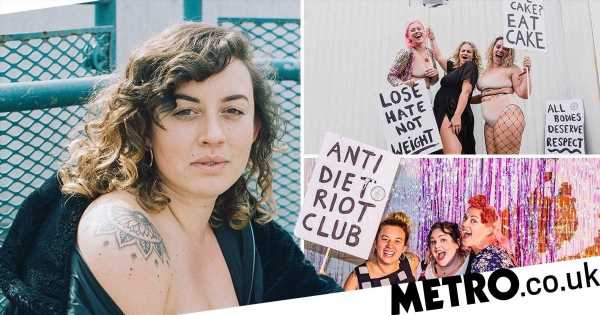 Hands up who have at least once said ‘I’m going on a diet’. That’s everyone yes? We thought so.

With so many fads around and with body ideals flaunted in practically every newspaper, magazine and website, it’s fair to say we’re all under a bit of pressure to look a certain way.

Becky Young, founder of the Anti Diet Riot Club, however, is raising the middle finger to diet culture with a support group that educates instead of shames.

Becky told Metro: ‘After 15 years of dieting and losing and gaining weight countless times, I eventually found the body acceptance community on blogs and Instagram and it completely changed my outlook on what I had been doing to my body and mental health.

‘Through this I was able to find some peace with my body and with food, and I wanted to create my own little body positive network outside of social media.’

This January marks two years since the club was launched to try to combat society’s obsession with diet culture, thinness, beauty ideals and fatphobia – and to celebrate they’re throwing a festival.

The one-day event takes place in January and will be a day of inspiring and challenging talks along with several creative workshops that will takeover Shoreditch space Colours.

Becky hopes that with the ‘New Year, New You’ nonsense looming, the club will convince those thinking of ditching what they love for green juices, to think twice.

Described as a real-life body positive community, Anti Diet Riot Club is designed to be a support group and raise awareness for the anti-diet movement.

‘Our aim is to educate as many people as possible about the serious potential consequences of dieting on your body and your mental health and to inspire people to respect and love themselves no matter what they weigh,’ says Becky.

‘We want to influence government policy to help protect young people from the damaging messaging from diet culture, to reduce weight stigma, and to increase representation of bigger bodies’.

In addition, Becky hopes the club will teach people how damaging dieting can be and inspire people to accept their bodies no matter their weight.

‘Anti Diet Riot Fest is a small way of trying to rebel against all the messaging that tells us that the month of January needs to be spent changing our bodies.

‘The festival is dedicated to nourishing your soul and mind with workshops, talks with absolutely no diet chat or body shaming allowed.’

Can never recall where I heard / saw this and google hasn’t helped me yet BUT this phrase will always be my go to retort when people talk about wanting to lose weight! It’s hard having these conversations, and sometimes a sassy one liner is the way (depending on the context). What do you say to people? Feel free to comment below ?? ••••••••• Also REMEMBER to sign up to our mailer (link in bio) to get lineup updates for Anti Diet Riot Fest! Lots of exciting new speakers and artists being announced…

In terms of the future, Becky is extending her reach after her team managed to crowdfund over £16,000 to build a bus that will help spread the word of the club through sharing circles, creative classes and plus size clothing swaps up and down the country.

Though the cause is primarily to educate, the ethos is also to fight back.

Becky explains: ‘If you want to help improve people’s body image and rebel against diet culture, then first start looking at and questioning the language you use around bodies and food.

‘One small act of resistance is to stop labelling food as ‘good’ or ‘bad’, or saying things like ‘I’ve just worked out so now I’m allowed to eat this snack’, because that feeds the narrative that we only deserve to eat if we’re trying actively to shrink ourselves.

‘Unfollow any social media profiles that make you feel bad about your body and fill your social media feeds with a diverse range of people, who inspire you to live a life that’s right for you rather than conforming to look/be/eat like everyone else.’