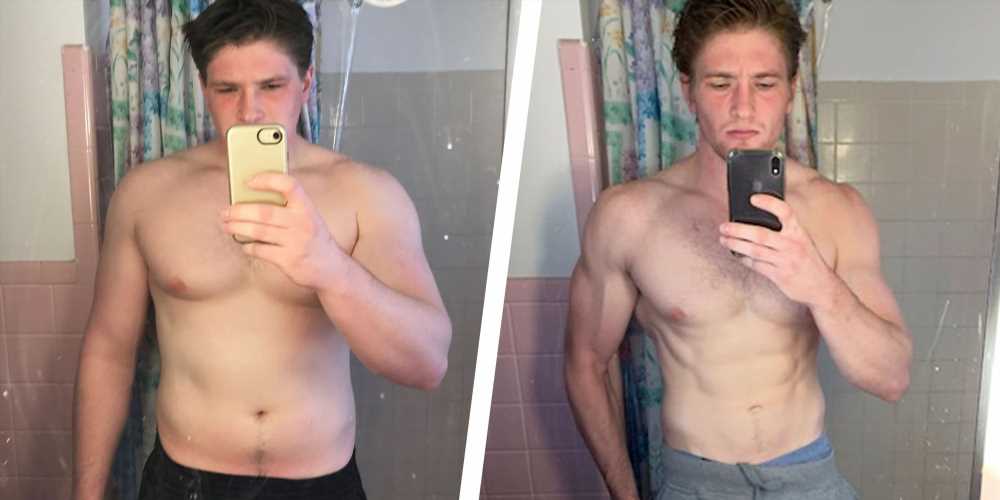 Kyle Gibbons was scrolling through instagram one day when he saw a high-school acquaintance who’d totally remade himself. At the time, Gibbons, a 24-year-old maintenance worker from Cleveland, Ohio, was 255 pounds, at 30 percent body fat. “I was down and depressed and unhappy with myself,” he says.

He hadn’t always been that way: Very active as a kid, he’d played sports and only got overweight in his junior year of high school. He worked out, but without the right diet and training regimen, he got “big, but pretty fluffy.” Partying in college didn’t help, so by the time he finished school, things had gotten out of control. “I thought I could eat whatever I wanted and still look good since I was skinny as a kid,” he says, “but it caught up to me as I got older.”

That Instagram post motivated him to change. He finally researched how to diet and train, starting out with an half-hour of calisthenics (dips, pull-ups, pushups, sit ups), followed by an hour of cardio. When he started, he could do three dips, one pull-up, and ten pushups; three laps around the track left him gassed. He pushed on—two weeks later, he noticed his clothes were looser. He could do it.

He stopped eating fast food and takeout, dialing in a diet of high protein, low carbs, and moderate fat to help him lose weight and retain muscle. He ate protein and veggies with every meal, and a small serving of cereal and peanut butter before bed.

After six months of calisthenics and cardio, and a new diet, he’d gone from 255 pounds down to 200—55 pounds dropped. He’d halved his body fat to 15 percent. That left him with a different problem. “After I lost the weight I was kind of ‘skinny fat,’ with lots of loose skin,” he says, “so I decided to pick up powerlifting routines instead.” He’s bulked up to 210, with ten to twelve percent body fat.

“As soon as I saw results,” he says, “I fell in love and it became second nature to me.” He’d get up in the morning and workout. “I wanted to lose weight more than anything and be fit, look good, and be happy.” Seeing other successful transformations convinced him it was possible. 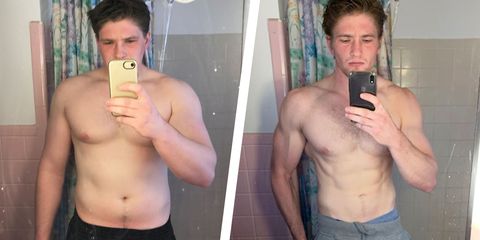 His family was amazed how quickly he lost weight, saying he looked like a different person. Friends came to him for advice. Shy and quiet growing up, he’s found new confidence after dropping the pounds. He’s started dating, and has even considered modeling. He’s powerlifting regularly and might start competing when he gets a little stronger.

Gibbons says patience is the key. “Nothing happens overnight, so you have to be consistent,” he says. A simple and efficient workout is easier to stick with for the long haul. And while a scale can be motivating, taking weekly pictures really help to highlight changes. Most of all, don’t beat yourself up over small lapses. “No one’s perfect,” he says. “You’re going to slip up—but you just have to hop back on the horse.”