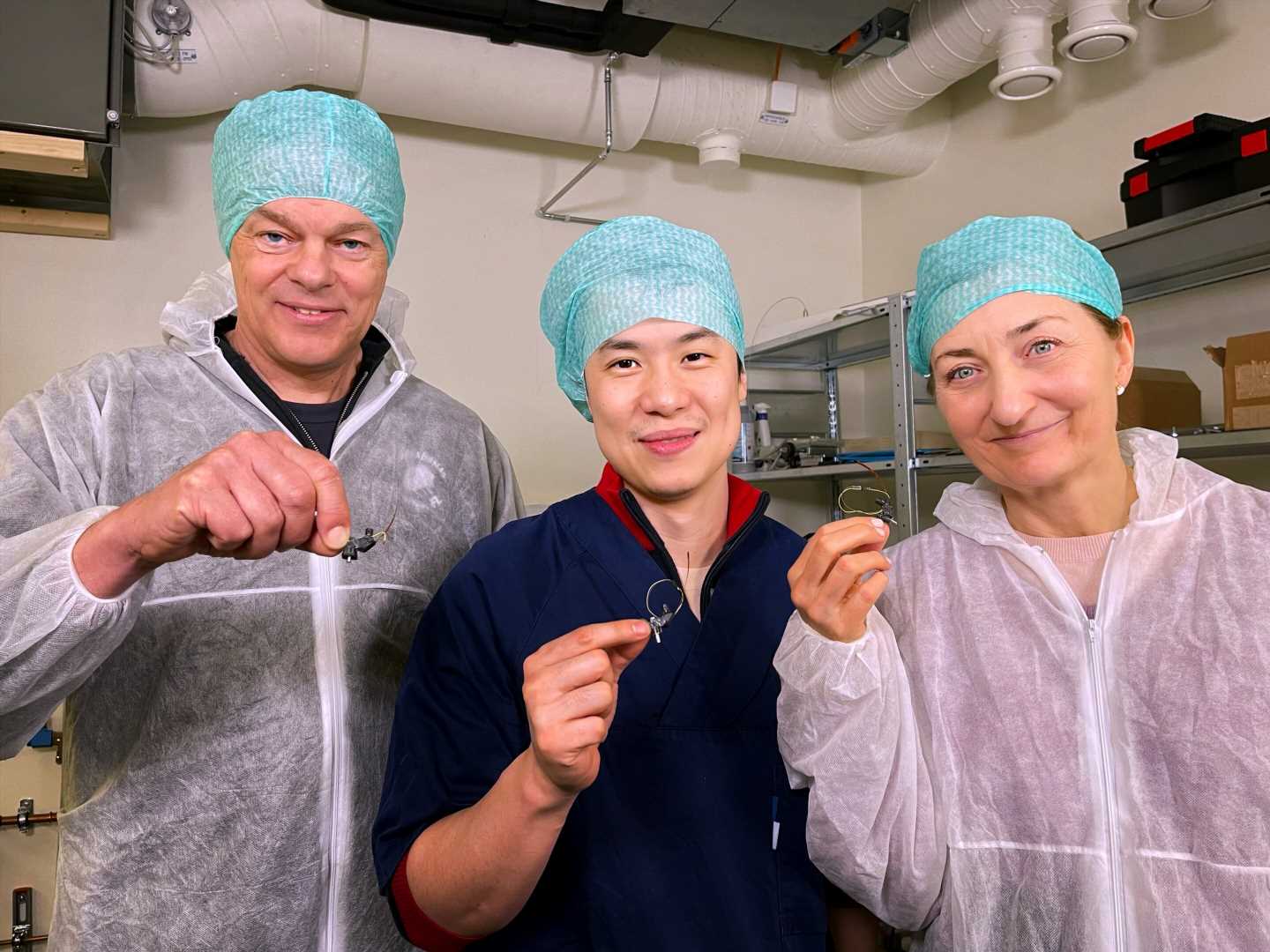 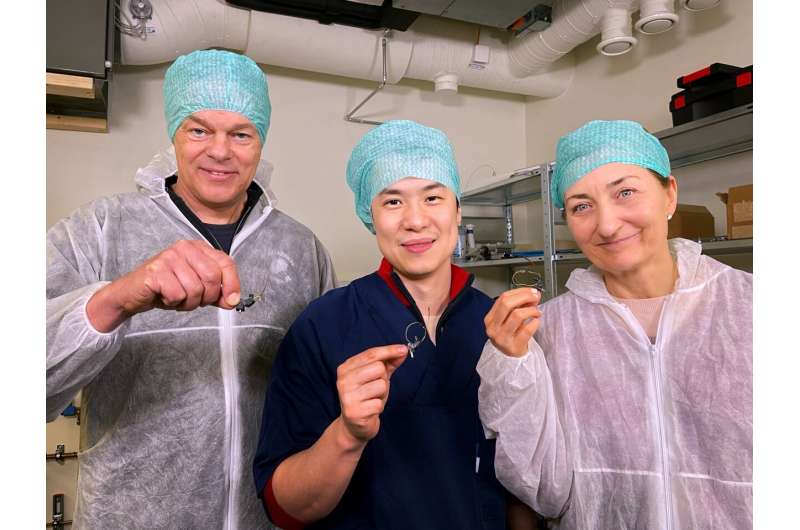 “Our dream was to invent a window into the brain, so we could see what happens inside when we’re thinking, planning, feeling, and remembering,” says Professor May-Britt Moser, describing conversations she and her long-term collaborator Professor Edvard Moser had as young psychology students in the early 1990s. Moser is Founding Director of Centre for Neural Computation and Co-Director of the Kavli Institute for Systems Neuroscience at the Norwegian University of Science and Technology (NTNU), and a Nobel Laureate, shared with her research partner, Edvard Moser, co director of the Kavli Institute for Systems Neuroscience.

Today, Leif Erikson the Mouse is the first step in the realization of that dream. The mouse is equipped with a window on his head. On top of the window is 2.4-grams of pure technological innovation. The portable “Mini2P” can perhaps best be described as a tiny cortical observatory, recording live images of neural landscapes the likes of which has never been seen before.

Reporting live from the brain

Inside Leif Erikson the Mouse’s brain, thousands of neurons are working together to solve a very specific task. This activity is visible as few cells begin to light up. Soon after, other cells light up.

The Mini2P can record live from the brain area that is responsible for Leif’s navigational skills. The twinkling brain cells that researchers see on the screen, are as the same time enabling the mouse to find his way across the floor, up a climbing tower, to the tower roof, where delicious vanilla cream cookie crumbles await.

“If we want to understand complex behavior, the animal must be free to move and behave in a way that is natural for it,” says Edvard Moser. “The Mini2P is the first tool that allows us to study neural network activity at high resolution in naturally behaving animals.”

The basic mechanisms of Mini2P are not too different from a light microscope, or the human eye for that matter. The smallest unit of light is called a photon. Mini2P uses two-and-two tiny bundles of light from a laser to excite and register neurons precisely, at high resolution.

“When developing the Mini2P, we followed two rules where we were not willing to compromise,” says Weijian Zong. Zong is the first author of a new paper describing the technology and is a researcher at the Kavli Insititute.

“The first rule was that any improvement to the equipment must not affect the animal’s natural behavior. So, we knew we had to shed weight to make the microscope and its cable as light and flexible as possible,” he said. “The second rule was that we must not compromise on the microscope’s performance. If we want researchers to invest time in a new tool, the miniscope’s features must perform significantly better than its predecessors.”

One of several brilliantly engineered features of the Mini2P is a tiny electrically tunable lens. By using static voltage, Zong was able to manipulate the curvature of the lens without causing a rise in temperature. Changing the lens’s curvature will trigger Mini2P to shift focal plane between the surface and deeper cell layers of the cortex, also enabling 3-D structure recordings of brain tissue.

A gene borrowed from jellyfish makes the brain cells glow when they chat with each other.

The bioluminescence lets the researchers see exactly which cells take part in different segments of the conversation. They can also watch how the neural conversation gives rise to ideas that the mouse then enacts “in the external world”.

The researchers can also color code the brain cells based on the genes they express and the brain areas they communicate with. This allows researchers to learn which types of brain cells must collaborate to generate different cognitive abilities.

Mini2P records simultaneously from thousands of brain cells. It can follow the same brain cells for more than a month, and keep them in focus even through the most vigorous of activities, like repeated jumps from a 22-centimeter tall tower. Mini2P can explore different areas and mental functions all across the brain’s cortex.

The researchers have tested Mini2P in multiple regions of the brain, such as the navigation system, the memory hub, and the visual area. By using a kind of patchwork quilt technique, it can map even larger neural landscapes, like 10 000 brain cells across the visual cortex.All measurements were made while the mouse was moving freely and doing what it normally does. This was simply impossible before Mini2P.

1-photon miniscopes have been around for a decade. They have several problems. The resolution is insufficient, the imaging may be too slow, you can’t shift focal plane in the Z-axis, or they can’t be used for most parts of the cortex featuring high activity and high cell density.

Mini2P allows recording from multiple planes along the Z-axis, in scales ranging from substructures of cells such as axonal branches, to topographical maps of ten thousand cells.The current benchtop version of the two-photon-microscope weighs half-a-ton and takes up nearly the whole room. The benchtop microscope requires that the mouse’s head be held in place, which restricts the mouse’s natural movement. It also replaces the mouse’s access to the real world with virtual reality. That’s nothing like a mouse would normally experience, which means its behavior probably isn’t natural, either.

Mini2P, on the other hand, weighs 2.4 grams, with a super-flexible laser and light-collection cable that allows the mouse to move just as freely and dynamically as it would without carrying Mini2P on its head.

“We believe the Mini2P is a game changer, and we want to share it with neuroscientists and labs across the world,” says May-Britt Moser.

“The amount of research data collected from every single recording, may also play a role in reducing of the number of animals used in research,” she said. The new tool could also play a major role in understanding brain diseases.

“Alzheimer’s disease often starts with damage in the entorhinal cortex,” says Edvard Moser. “We know that Alzheimer’s cause deficits in the ability to navigate, and in memory. These are brain functions that arise from the joint collaboration of thousands of brain cells.”

“The Mini2P offers a way to monitor changes in the dynamics between thousands of cells in freely moving mice, using mouse strains that are model organisms for studying Alzheimer’s disease,” he explains. “The ability to label different cell types, may also enable us to identify which cells that are vulnerable to the early changes related to Alzheimer’s disease,” Edvard Moser said.

Mini2P is an open-source invention available from the Kavli Institute for Systems Neuroscience at NTNU in Trondheim. The blueprint, a shopping list, and instructional movies are available from GitHub. The institute will also provide workshops later in the year.