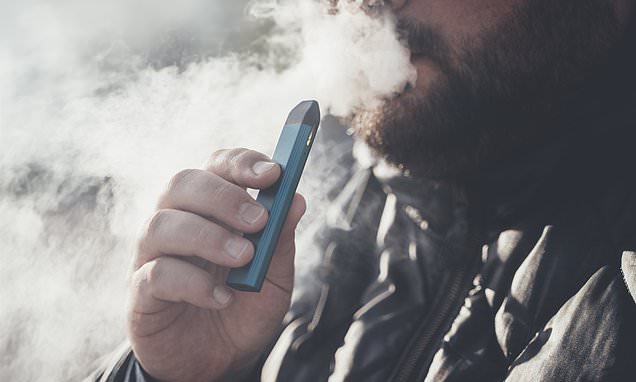 Vaping for just one month leads to DNA damage that is comparable to smoking tobacco, another damning study of e-cigarettes suggests.

Researchers at McGill University in Montreal, Canada, exposed mice to the equivalent of 60 puffs of a mango-flavored Juul device per day for four weeks.

The rodents suffered cellular and molecular changes that have been linked to the formation of cancer in traditional cigarette smokers.

America is currently in the grips of a vaping epidemic among children that has been blamed on child-friendly flavoring and glitzy shop window displays. 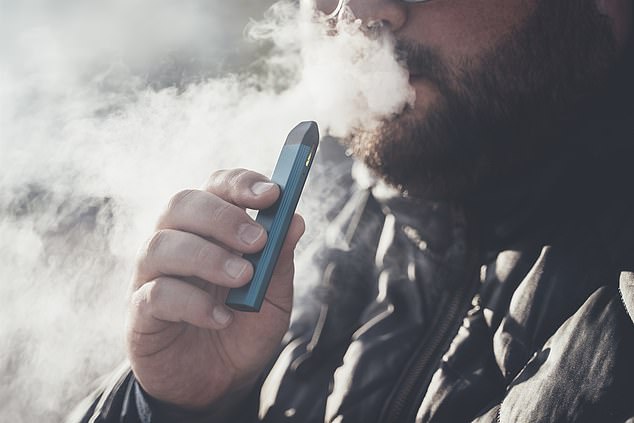 Vaping for just one month leads to ‘widespread changes’ in lungs and raises the levels of inflammation, another study suggests (file photo)

At least 2.6million American children 11 to 18 years old use e-cigarettes, official figures show, and the number is rising.

In the latest study, scientists exposed mice to air from a Juul device, which contained nicotine.

The NY State Department of Health issued the plea just before 2023, saying e-cigarettes are ‘highly addictive and dangerous’ to users and people exposed to second-hand vapor.

A third of the mice were blasted with 60-Juul puffs a day, administered in three 20-minute sessions with a three-hour gap between each.

This was to mimic low use of the vaping devices, the researchers said.

In a survey in November, one in ten teenagers admitted to vaping within five minutes of waking up — a sign of addiction — while a quarter said they used vapes daily.

The rest of the mice were exposed to e-liquid used in vapes, or just air in the laboratory.

E-liquid — used to create the vapor — contains propylene glycol, a byproduct of petroleum, and vegetable glycerin, from vegetable oil.

The study focused on Juul, but studies have shown that other brands also have a damaging effect on the lungs.

Many vape devices contain e-liquids that hold hundreds of chemicals which can be harmful to the lungs. They also contain nicotine, which can prompt addiction to vaping.

After four weeks, the scientists killed the mice and examined their lungs for signs of the effects of Juul machines.

Testing also revealed alterations in hundreds of genes in macrophages — another type of white blood cell involved in the immune response to infection or damage.

They said that the alterations they observed suggested an increased risk for vaping-associated lung injury (EVALI).

Symptoms of the condition include shortness of breath, chest pain, coughing and hemoptysis — or coughing up blood. In severe cases, it can result in death.

Since 2019, thousands of cases have been reported across the US, with the condition strongly linked to e-cigarettes.

The researchers concluded: ‘Thus, e-cigarettes are not inert and can cause significant cellular and molecular changes in the lungs.

Dr Carolyn Baglole, an experimental medicine expert at McGill University, said: ‘The health consequences of vaping are not known.

‘Our results show that inhalation of the vapor generated by a popular brand of e-cigarette causes widespread changes inside the lungs.

‘Data that further highlight that these products are not inert and may lead to lung damage if used long term.’

– When used simultaneously, the health effects could be even worse

– Long-term use of either caused damage to blood vessels, though each appeared to cause some adverse effects that the other does not, suggesting that dual use of the products compounds the damage.

– Blood from the e-cig users caused more permeability in the blood vessel cells than the blood from both tobacco smokers and nonusers, raising the risk of cell damage and heart disease.