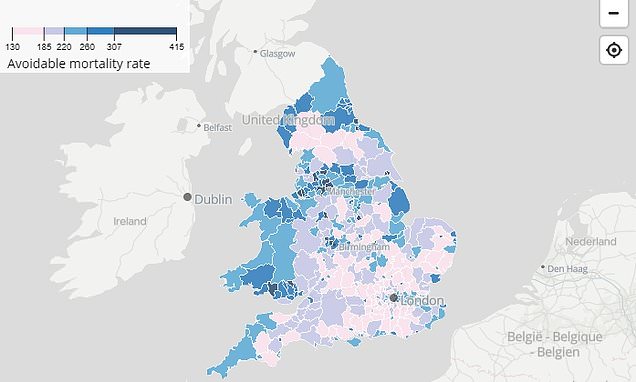 Are YOU at risk of an avoidable death? Map reveals the postcode lottery of ‘dying from a preventable cause’

Where you live influences your risk of dying by an avoidable cause, statistics reveal.

Data released by the Office of National Statistics shows the risk of death that may have been avoided through ‘good-quality healthcare’ or from a condition that could have been prevented via ‘public health interventions’ varies nationwide.

Of England and Wales’ 346 local authorities, Blackpool had the highest rate of male preventable mortality in 2017, with 415.2 in every 100,000 deaths being avoidable.

This is compared to just 248.7 avoidable deaths per 100,000 male fatalities in Surrey, which had the lowest mortality rate.

And among women, Manchester had the most avoidable deaths in 2017, with 256.4 in every 100,000 fatalities being preventable.

It defined preventable fatalities as those ‘where it is reasonable to expect deaths could be avoided through good-quality healthcare, even after the condition has developed.

‘[And] those where it is possible to prevent the condition from occurring in the first place through wider public health interventions, such as those targeted at reducing the incidence of smoking.’

Since 2014, the largest changes in avoidable mortality rates were for injuries, which rose by 37 per cent in Northern Ireland, and respiratory disease, like asthma, which increased by 19 per cent in Wales.

Cancer remained the leading cause of avoidable death in 2017 and was responsible for up to 92.7 in every 100,000 fatalities in the UK.

Scotland had the highest rate of preventable deaths for cancer, heart disease, drug use, injuries and infections.

But Wales had the most avoidable mortalities from respiratory diseases, which caused 30.1 in every 100,000 such deaths.

This made up one per cent of the total preventable deaths in the UK that year.

Most occurred due to injuries, followed by ‘perinatal’ deaths – those that take place during pregnancy or the first year of life, as well as birth defects that affect the circulatory system or spina bifida.

Although mortality rates among children and young people have fluctuated since 2014, there has been no significant improvement.