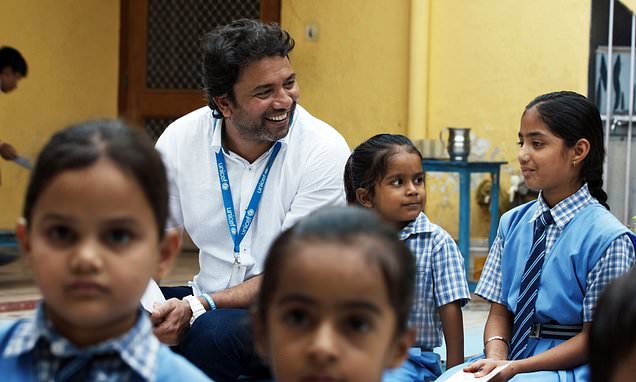 UK is the home of the anti-vaxxer: BBC documentary reveals people as far afield as INDIA now use social media to read conspiracies rooted in the work of disgraced British scientists

Anti-vaccination conspiracy theories born in the UK are now spreading as far afield as India as mobile internet makes its way around the globe.

In the BBC Two documentary Conspiracy Files: Vaccine Wars, which airs tonight, experts brand the UK the home of the anti-vaxxer.

Theories hatched by now disgraced British doctors have, despite being proven wrong, travelled across oceans and continents to sow discontent in parents across the world.

It comes as NHS figures today revealed uptake rates fell for all nine childhood jabs in England last year, a red flag in an ongoing battle against misinformation.

Officials in the US, France, Poland and India have all seen myths about alleged dangers of vaccinations taking hold in their countries, the documentary explains.

One expert predicted that, in the current political climate, ‘we won’t find a solution to this’. 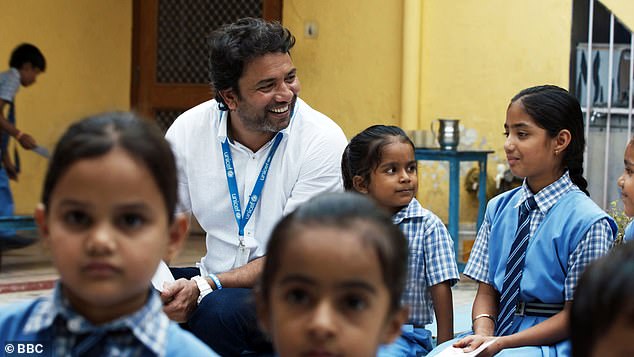 A UNICEF worker in India, Nizamuddin Ahmed (pictured) said a surge in smartphone use and access to social media apps like WhatsApp and Facebook has led to an upturn in people’s vaccine scepticism in the country. He said: ‘Most of the material which we have seen on the social media sites or the WhatsApp or other tools are being originated outside India’

The documentary, which will air at 9pm on Thursday, September 26, pits experts and campaigners from around the world against each other to debate vaccines.

WhatsApp and Facebook, for example, have hundreds of millions of Indian users and are a haven for anti-vaxx content which has been translated as far as local dialects.

The conspiracy theories come from overseas, he says, and can be traced back to long-discredited science in the UK.

Mr Ahmed said: ‘Quite often in the field, 10 to 20 per cent of the families… come with their questions. Why is it important? Why should my child have to be vaccinated?

‘People are getting exposed to these false and fake messages regarding the vaccination.

‘Most of the material which we have seen on the social media sites or the WhatsApp or other tools are being originated outside India.’

A UNICEF immunisation specialist in the country said the posts are translated into various languages and locally specific dialects and targeted to hook people in.

Campaigners use emotional tactics, Dr Bhrigu Kapuria said, as well as ‘rumour-mongering’ which targets people’s religious feelings and constantly adapts to its audience. 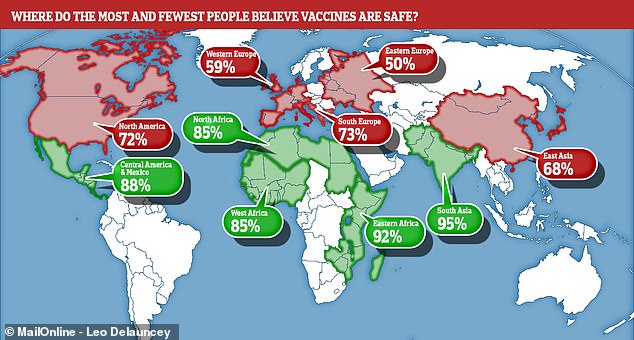 Research by the UK-based Wellcome Trust, published earlier this year, revealed how anti-vaccination sentiment around the world varies. It found those in Europe and East Asia are the most likely to think vaccines are unsafe, while the highest levels of trust were found in East Africa and South Asia

The foundation of most anti-vaccination theories is based in claims made by doctors in England – John Wilson in the 1970s and Andrew Wakefield in 1990s.

Wilson claimed he had evidence that the whooping cough vaccination could cause brain damage in small children, and that he had case studies to prove it.

But detailed scientific studies were carried out by the British Government which completely disproved Wilson’s theory, the documentary explains.

In 1995, gastroenterologist Andrew Wakefield published a study in The Lancet showing children who had been vaccinated against MMR were more likely to have bowel disease and autism.

He speculated that being injected with a ‘dead’ form of the measles virus via vaccination causes disruption to intestinal tissue, leading to both of the disorders.

After a 1998 paper further confirmed this finding, Wakefield said: ‘The risk of this particular syndrome [what Wakefield termed ‘autistic enterocolitis’] developing is related to the combined vaccine, the MMR, rather than the single vaccines.’

At the time, Wakefield had a patent for single measles, mumps and rubella vaccines, and was therefore accused of having a conflict of interest.

Nonetheless, MMR vaccination rates in the US and the UK plummeted, until, in 2004, the editor of The Lancet Dr Richard Horton described Wakefield’s research as ‘fundamentally flawed’, adding he was paid by a group pursuing lawsuits against vaccine manufacturers.

On January 6 2011, The British Medical Journal published a report showing that of the 12 children included in Wakefield’s 1995 study, at most two had autistic symptoms post vaccination, rather than the eight he claimed.

At least two of the children also had developmental delays before they were vaccinated, yet Wakefield’s paper claimed they were all ‘previously normal’.

Further findings revealed none of the children had autism, non-specific colitis or symptoms within days of receiving the MMR vaccine, yet the study claimed six of the participants suffered all three.

And Wakefield, a more recent anti-vaxx icon who is still active in the US and Europe, claimed in the 90s that the MMR jab could cause autism.

Wakefield’s research was also found to be false – he had made up the results of a study he published in the medical journal The Lancet – and he was struck off the medical register and left the UK soon afterwards.

But the shadows of their work persists, with anti-vaxxers around the world still believing the disproven theories as well as others, such as that ingredients like mercury – although a non-metal form – inside vaccines are harmful.

Although the science claimed to be behind these myths is repeatedly proven wrong, people continue to believe them.

And the argument has taken on an increasingly political angle, with some exercising it as a right to choose what is put into their child.

In France, the most vaccine-sceptical country in the world according to a recent study, a third of people actively believe vaccines are unsafe.

A French woman who runs one of the world’s biggest anti-vaccine Facebook groups, Marie Werbreuge, features on the programme.

She claims vaccines contain ingredients which could be damaging to human health.

‘That clearly contributes to their defiance towards public health messages. French people are very inclined toward alternative medicine.’

Anti-vaxx messages have also found a home in Poland, which Wakefield visited recently as part of a publicity tour for his 2016 documentary, Vaxxed.

At the same time, the country is being rattled by a measles outbreak.

There have been 1,282 cases of the illness confirmed by the World Health Organization already this year – more than triple the 391 last year and a 20-fold rise from just 63 in 2017.

Scientists speaking in the documentary argue the debate appears to be becoming less and less about the science and more of an anti-establishment stance.

A secretive racket between governments and pharmaceutical companies to extort money out of countries without doing proper safety testing on the drugs, they claim.

Dr Sam Martin, a digital sociologist at the London School of Hygiene and Tropical Medicine, told the programme: ‘When social media platforms stop misinformation on one [network], users spread this information across other networks like YouTube and Twitter and Facebook

‘There was an outbreak of measles in New York and people started posting negative tweets that were then picked up from the UK and then retweeted, so it shows that the USA and also the UK have the influence over what’s reposted around the world.’ 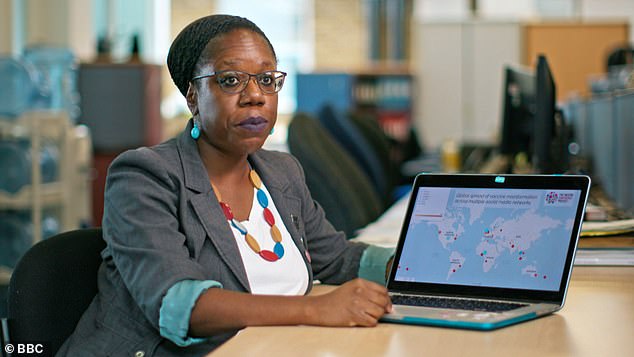 The London School of Hygiene and Tropical Medicine’s Dr Sam Martin (pictured) said: ‘There was an outbreak of measles in New York and people started posting negative tweets that were then picked up from the UK and then retweeted, so it shows that the USA and also the UK have the influence over what’s reposted around the world’

This ease of communication means the spread of conspiracy theories is not bound by country borders or oceans, and is a mammoth challenge to stop.

Efforts by governments and social media companies are already being made, but as long as people feel threatened by the establishments they live in, the sentiments will continue to spread, the experts say.

A political expert quoted on the programme added: ‘As long as we live in a society in which people feel as though the social contract has broken down, in which they feel like they’re living in a inequitable economy, in an unrepresentative political system, then we won’t find a solution to this.’

WHAT WILL THE UK GOVERNMENT AND NHS DO TO IMPROVE VACCINATION RATES?

The Department of Health and the NHS are expected to produce a comprehensive strategy for improving vaccination rates later this year.

Health authorities have said they will: