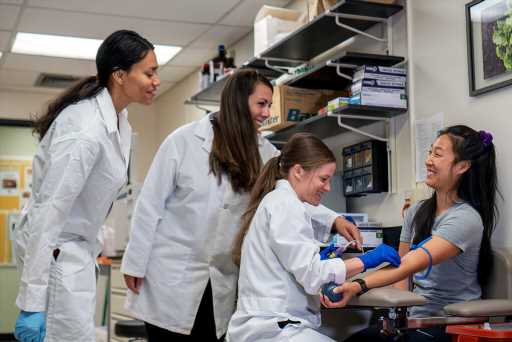 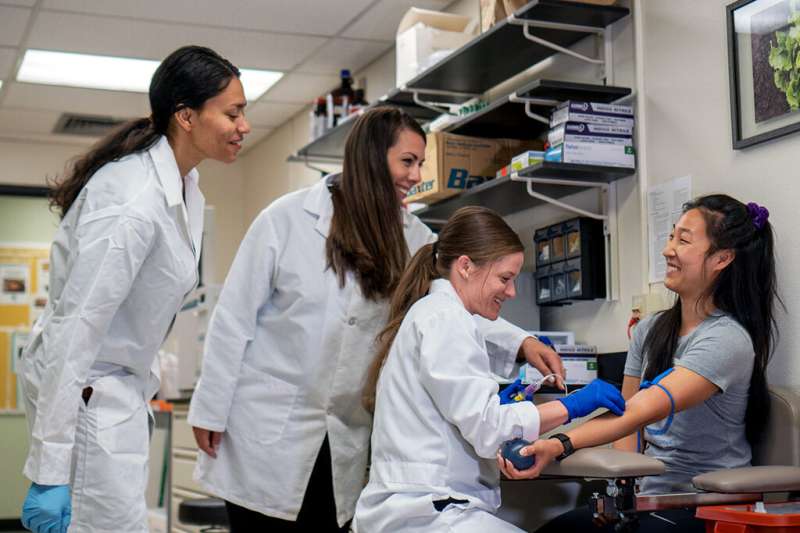 Consumption of 22 grams of freeze dried highbush blueberry powder (equivalent to about 1 cup of fresh blueberries) mixed with water taken daily for 12 weeks improved the function of the inner lining of blood vessels (called the endothelium), according to preliminary findings of a study that Johnson presented in April at the International Conference on Polyphenols and Health in London. It was her first invitation to present at an international event.

“We found an improvement in endothelial function which is important for human health, as endothelial dysfunction is linked to atherosclerotic cardiovascular disease development,” Johnson said. “We also found evidence that blueberries improved endothelial function through reductions in oxidative stress in the body.”

Oxidative stress is the imbalance between free radicals and antioxidants in the body and can damage cells and tissues, which promotes endothelial dysfunction and cardiovascular disease development.

“Previous research has demonstrated that polyphenols and polyphenol-rich foods like blueberries can reduce oxidative stress,” Johnson said. “To observe a direct link between reductions in oxidative stress and improvements in endothelial function in humans is exciting and provides insight into how blueberries promote cardiovascular health.”

They performed a randomized, double-blind, placebo-controlled, parallel-arm clinical trial in 43 estrogen-deficient postmenopausal women aged 45-65 years with elevated blood pressure or stage 1-hypertension. Johnson’s research team used freeze-dried blueberries to retain the polyphenols as much as possible, and to allow for the study to be double-blind, meaning that neither the investigators nor the study participants knew whether they were getting the treatment (blueberry) or placebo.

The London conference included internationally known fellow scientists whose research she follows. “The people that put on the conference, that attend, that present there, these are all people whose work I have regularly read since I was a doctoral student.” Johnson said. “I cite their papers, so it’s pretty cool. I didn’t submit an abstract for this. They invited me to come.”

Johnson, an associate professor and director of the Functional Foods & Human Health Laboratory in the Department of Food Science and Human Nutrition, said the research soon will be in publishable form and her Ph.D. student, Emily Woolf, will present the results at the American Society for Nutrition Conference in June, which will also be part of her dissertation.

Johnson has extensively researched the health benefits of blueberries and other foods such as aronia berries, microgreens, and red beetroot juice.

“We don’t fully understand the health benefits and how they interact in the human body,” Johnson said of blueberries, “but we know that they’re really important to human health.”

Johnson, associate professor Tiffany Weir and incoming FSHN department head Chris Gentile (co–principal investigators on the USDA grant), and collaborator Ana Rodriguez-Mateos of King’s College in London are exploring the role of the gut microbiome in determining the cardiovascular-protective effects of blueberries and their polyphenols.

Sylvia Lee, a masters student of Johnson’s and an incoming Ph.D. candidate, did her thesis on this topic. Lee and another student were named fellows by the Vice President for Research Office.

Johnson said the team observed increases in blood metabolites that are products of metabolism of anthocyanins (polyphenols found in blueberries that give them their blue color) and metabolism of polyphenols by the gut microbiome. She said the researchers can link these results to the gut microbiome and they will be further explored in the USDA grant.

Johnson said the key takeaway is that there are benefits to consuming blueberries on a regular basis to help improve cardiovascular health. She said foods rich in phytochemicals include many fruits and vegetables, cocoa, chocolate, tea, nuts, legumes, whole grains, and spices. But dark fruits top the list.

“Berries, you know, people like them. They’re consumed a lot,” Johnson said. “And that’s one of the reasons why I’m interested in studying them as a dietary intervention for improving human health—something that people are actually going to eat.”