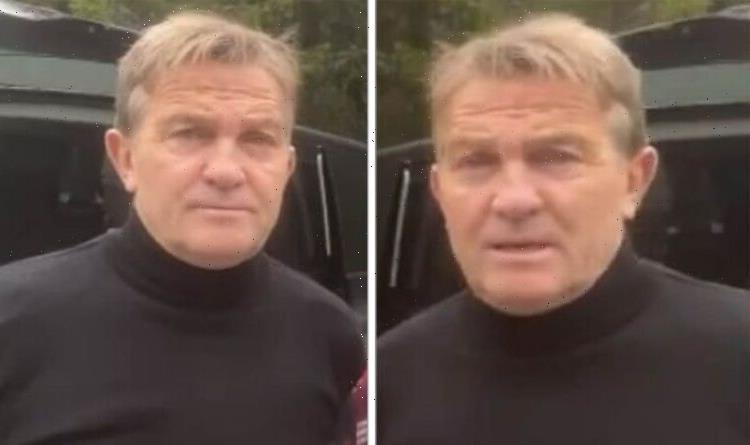 After four seasons of the show Breaking Dad, 61-year-old Bradley has taken part in some of the most dangerous activities you possibly can. From cliff diving, being thrown out of a plane and abseiling it is fair to say the star has looked his fears in the face and has won. Yet it was whilst the pair were in America, and Bradley was able to fulfil a life-long dream of his. But things went horribly wrong and the star was rushed to hospital after breaking his back in three places.

Having a passion for cowboy films, Bradley was initially thrilled to get the chance to go bull riding when they visited Kettering, Dayton.

But soon the star was flung from the animal and landed awkwardly on his back. Reflecting on the ordeal on an appearance of The Jonathan Ross Show, The Chase host said that he panicked that he might have left hospital unable to walk again.

“My life’s ambition was to go on a rodeo and they [the show’s crew] always say to me, Barnes says to me, ‘What would you really like to do Dad?’ And I say, ‘I would love to do a rodeo’, because I love cowboy films,” Bradley explained in relation to the incident.

“And then you have the chance to go in the novice class with all the kids and the girls and the mums and the dads, because it was a family day.

“And I was like, ‘yeah I’ll have a go at that.’ Then, unfortunately, I fell slightly wrong.”

Stressing to viewers that his injury was not as “severe” as it sounded, the star did admit that thoughts of his “mortality really [came home].”

“Two days after – I promised his mum I’d look after him on the tour – I’m trying to climb an ice mountain,” he said.

“When you get to our age JR [he says to Jonathan], all of a sudden the thoughts of your mortality really come home and I now realise that this time last year I might have come out of hospital not being able to walk. So consequently, you’ve got to be… life’s precious.

“Barney is the man now, at 23, that I always wanted to be. And that’s absolutely true.

“He’s got no fear, he’s young, he’s finding his first feet in business and stuff.

“I just always wanted to do that.”

Commenting on his father’s injury on This Morning, Barney added that he had concerns of his own after taking part in the activity.

He said: “I did it first and fell off and it really hurt so I said ‘Dad can’t do it, it really hurts’. Dad’s nearly triple my age, and I just thought it’s going to kill him falling off this bull!

Luckily for the star, after being discharged from hospital he was back walking and driving the iconic RV that the two use to travel to their destinations, although Bradley admitted that he had to “push” himself to do so.

The Winchester Hospital explains that the transverse process are winged bones on the right and left side of each vertebra in the spine.

Fractures or breaks within these areas are normally caused by the following:

As with any bone break, after sustaining the injury individuals will feel intense and severe pain, swelling and bruising, numbness or tingling, problems moving the injured part of the spine and loss of bladder control.

Treatment will depend on how bad the injury is. In some cases it can take up to six weeks to heal. For minor fractures, implements such as a back brace might be given to the patient, but for more severe injuries surgery may be needed to reconnect pieces of bone and hold them in place.