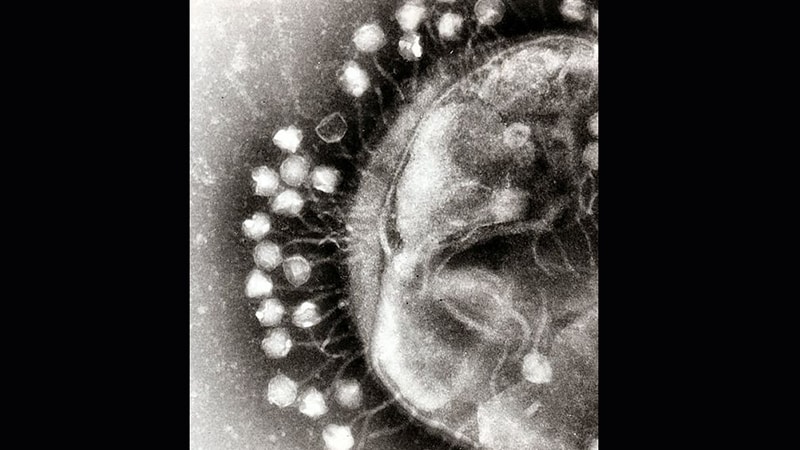 A new film called Salt in My Soul was recently released, with one of the expressed goals being to raise funds for phage research and antibiotic resistance. 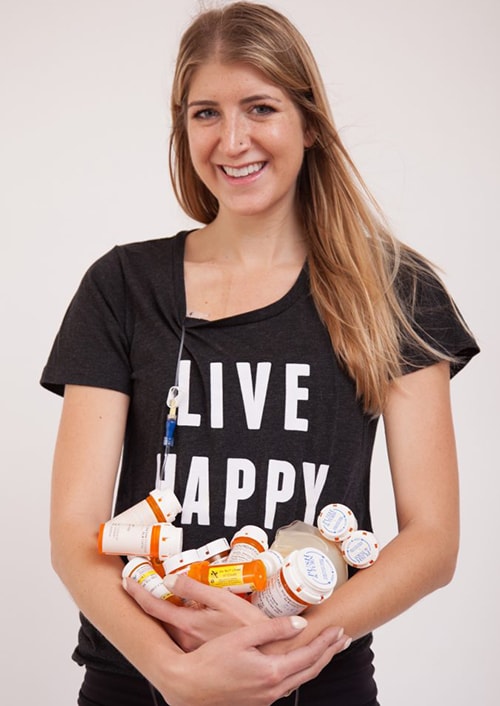 The film shares the story of Mallory Smith, a young woman, now deceased, who suffered from cystic fibrosis. She kept video and written diaries that she shared with her family only after her death from a multidrug-resistant Burkholderia cepacia infection. In a desperate attempt to save her, Mallory received phage therapy. Her autopsy showed that the phages had begun to work, killing the B cepacia as intended. They just hadn’t had enough time. 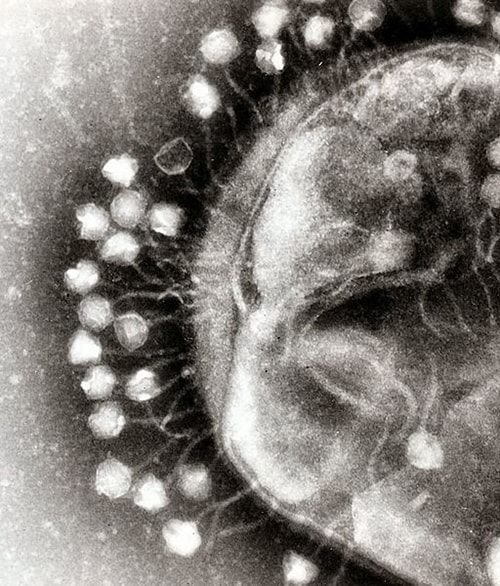 The name bacteriophage is an apt description. Its Greek origin means “bacteria eater.” Phages are viruses that infect bacteria; many cause the bacteria to lyse (disintegrate). Discovered in 1915 by French-Canadian microbiologist Felix d’Herelle, phages were used briefly to control cholera outbreaks. In 1934, d’Herelle helped establish a phage research institute with fellow microbiologist George Eliava in the Eastern European nation of Georgia (now known as the Eliava Institute of Bacteriophages, Microbiology and Virology). Phage therapies were said to have been employed by the German army during World War II as well as in the Soviet Union and Japan during that era.

Being associated with mud and sewage, phages had an unsavory aura, prompting some concerns about their purity and safety. Then penicillin was discovered and produced as a miracle drug during World War II. The rapid period of antibiotic development continued from 1940-1960. Partly as a result of the ascendancy of antibiotics, interest in phages dwindled outside the Eliava Institute and the USSR. With the post-war and McCarthy era, phage therapy was viewed as “un-American” and was associated with communists.

Renewed interest in phage therapy began with growing concerns about antibiotic resistance. For example, multidrug-resistant (MDR) Acinetobacter became well-known. It caused so many life-threatening infections in service members in Iraq and Afghanistan in the early 2000s that it was nicknamed “Iraqibacter.”

Steffanie Strathdee, PhD, from the University of California San Diego, told Medscape Medical News a remarkable story of her desperate search for phages to save her husband, Tom Patterson. While they were vacationing in Egypt, he acquired an MDR Acinetobacter baumannii infection complicating gallstone pancreatitis, which caused multiorgan failure from sepsis. After a multicenter search for a phage match, Patterson became the first person to receive intravenous phages in the US and made a steady recovery thereafter. They shared their story in a Ted-X presentation and a written memoir, The Perfect Predator.

Strathdee is now co-director of the Center for Innovative Phage Applications and Therapeutics at UCSD, the first phage treatment center in the nation.

How Do Phages Work?

Phages have two possible lifecycles in the host bacterium.

With lytic phages, after the virus injects itself into the bacterium, the viral genome promptly replicates in a lytic cycle. The host cell also synthesizes the heads and sheaths of the virus particles, and they’re assembled in the cell. As the daughter phages develop, they weaken the bacterium’s cell wall, and it bursts, releasing 100-200 new phages.

Phages can also remain dormant intracellularly and are then referred to as a temperate or nonvirulent infection.

Phages are very specific about the types of bacteria they infect — only particular strains of a species, for example. This is a mixed blessing: on the one hand, it can be very hard to identify a specific phage that will target a patient’s bacteria, but that specificity also means it doesn’t disrupt the patient’s normal flora.

Benjamin Chan, PhD,  a research scientist at Yale University in New Haven, Connecticut, told Medscape Medical News, “Over the years labs have amassed large phage libraries for different types of bacteria. When they get a case with Pseudomonas, for example, they turn to the library first. We have maybe 20 phages that we use initially to screen, and we can do that in a single (culture) plate. And those 20 cover the overwhelming majority — ninety plus percent — of the isolates that we get.

“If something happens to be resistant to those 20, then we expand out to the rest of the library. But the initial panel can be done quickly…in 8 hours. We could isolate a new phage, have it characterized, amplified, prepared, and ready to go within a week, but obviously there’s some stuff that’s harder to find phages for, and that can take a long time.”

And even a week can be too long for some patients, like Mallory Smith.

Chan explained that phages kill bacteria differently than antibiotics do. Researchers can now identify the specific surface sugars or proteins that the phage uses to adsorb to the host. Perhaps most significantly, investigators can select phages that target specific antibiotic-resistance factors, such as the efflux pump. “The only [bacteria] that are left are ones that have a mutated form of it, which hopefully don’t work as well, and so they can’t efflux antibiotics…So they’re resensitized to antibiotics, but they’re resistant to phage.”

Chan emphasized that phages can make previously drug-resistant bacteria susceptible to antibiotics again. “That’s the dream picture right there…We’ve got some pretty good data [showing] that we can resensitize bacteria to chemical antibiotics. And we’ve seen it a few times in individuals,” Chan said.

Why Does This Matter? Antimicrobial Resistance

In 2019, more than 1.2 million people worldwide died directly from antimicrobial resistance (AMR) and another 5 million died, in part, from AMR. This is more than the annual deaths from malaria (640,000) or AIDS (860,000). The CDC estimates that the US alone experiences more than 2.8 million infections and more than 35,000 deaths each year from antibiotic-resistant pathogens.

There are phages that could target each of the AMR bacteria, and some patients have been treated successfully; others didn’t respond or relapsed.

Greg Merril, CEO of Adaptive Phage Therapeutics (APT), told Medscape Medical News that, unlike the long timeline for drug development, gaining approval for a phage can take less than 6 months. This is because the FDA regulates the process, not the specific phage, and relies on gene sequencing to look for risks from a particular phage. Thus, phages appear likely to have a growing role in treating AMR.

There are many potential uses for phages, particularly for combating AMR or infections in difficult sites.

For example, food safety is a growing concern, and food-borne outbreaks are often in the news. Most often, we hear of Salmonella, Campylobacter, Escherichia coli, or Listeria outbreaks.

The CDC estimates that each year there are 48 million people sickened in the US (1 in 6) from food-borne illness. Another 128,000 are hospitalized annually, and 3000 per year will die.

Because of this large toll, combined with the growth of antibiotic resistant organisms, there is an urgent need for new approaches to this global problem. In 2006, the FDA approved the use of phages as “GRAS”— generally regarded as safe. It’s been used on red-meat parts and trim intended to be ground, for activity against E coli O157:H7.

One of the advantages of phages is that they do not affect taste, appearance, or odor. ListShield, a Listeria phage cocktail from Intralytix, has also been approved as an additive for ready-to-eat foods. There is another phage product targeting Salmonella species. Each of these phage products is certified kosher and halal, and they’re considered suitable for organic labeling.

The military has become quite interested in phage therapy, particularly since the experience with Acinetobacter infections from Afghanistan and Iraq. ATP’s Merril told Medscape that the Navy expressed a need to translate their phage research into commercially available therapy. APT acquired exclusive, worldwide rights to the phage library (PhageBank) and technology of the US Navy’s Biological Defense Research Directorate (BDRD) as well as similar rights to the US Army’s phage library.

He added: “We have relationships with local farms. We have a relationship with the Maryland Zoo in Baltimore…We’ve been acquiring thousands of bacterial isolates that are drug resistant, and those become the targets for our phage-hunting activity.” Merril is also excited about their relationship with the Mayo Clinic, who “ended up investing in APT and are partnering with us to commercialize our assay for matching the phage to bacterial isolates.”

A main focus of phage therapy is treating device infections, particularly prosthetic joint infections (PJI). These are notoriously difficult to cure, in part because bacteria in joints and a variety of mucosal surfaces can be protected from antibiotics in biofilms. Treatment commonly requires repeated surgeries to wash out the joint, replace infected components, and sometimes place antibiotics locally. Patients are often bedridden for months from the surgery. Many are elderly to begin with, and there is a 5-year mortality rate of about 22%, higher than that from prostate or breast cancer.

James Doub, MD, from the University of Maryland Medical System, told Medscape he has treated nine patients with PJI. His patients are treated with standard antibiotics, a DAIR procedure (debridement, antibiotics, and implant retention) in which the plastic component is removed, and intra-articular and intravenous phage therapy. Patients continue on oral antibiotics for 6 months. One patient with a polymicrobial infection failed due to noncompliance. Eight others are doing well, but only one is longer than a year postop. Doub described one patient who was clinically cured but then developed transient swelling at the surgical site. His culture at 1 year grew an MDR Klebsiella.

John Haverty, the first person treated with phages at the Mayo Clinic, is the poster child for phage therapy.

As described in a 2020 case report in Clinical Infectious Diseases, he had no fewer than 17 surgeries to salvage his leg and was facing amputation. Haverty told Medscape he had “unmeasurable pain with some of these bacteria. I mean, definitely 15 on a scale of 10…The phages changed everything within 2 days. After the second infusion of phage, we can see a visible lessening of the reddening, the swelling was going down. And I had more flexibility in just a couple of days than I’ve had in years. I mean, it was amazing…It gave me so much relief that I was able to do normal things again.” 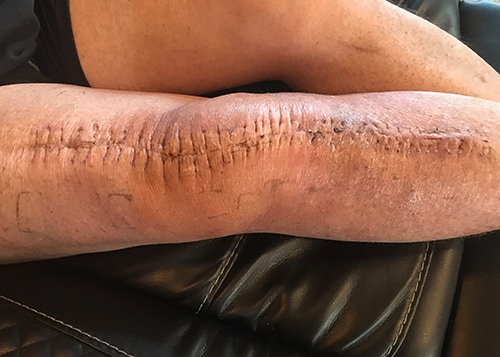 Haverty said that phage therapy played a dramatic role in improving his life, and he is an ardent phage enthusiast. Clinically, he is still doing very well, now 2½ years later.

However, Haverty’s case also serves as a caution in interpreting study results. He, too, still had a positive result from an intraoperative culture last year. He has also been maintained on chronic antibiotic suppression, so he should not be described as a “cure.” (His physician, Gina Suh, MD, of the Mayo Clinic, who has treated several other patients with phages for PJI, declined to give details of their outcomes pending completion of a case series and acceptance for publication — which could easily take another year or more.)

What’s Ahead for Phage Therapy?

With the worsening antibiotic resistance crisis, phage therapy holds great promise for treating a variety of infections. Studies are prioritizing difficult-to-treat infections such as those involving biofilms on prosthetic joints and other devices, and multidrug resistant organisms, such as Acinetobacter. Development and approval of phage therapy is faster than for new antibiotics. Thus far, enthusiasm is based on isolated case reports. Although these are exciting and illustrate the potential of phages, clinical trials are sorely needed to know whether phages have the potential to help patients on a larger scale.

Judy Stone, MD, is an infectious disease specialist and author of Resilience: One Family’s Story of Hope and Triumph Over Evil and of Conducting Clinical Research , the essential guide to the topic. You can find her at drjudystone.com or on Twitter @drjudystone.