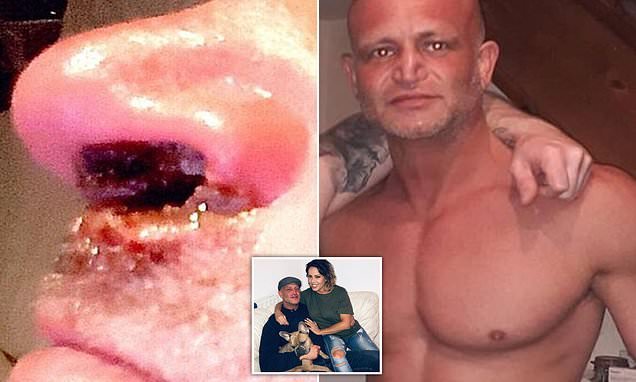 Addict, 44, who snorted £400 of cocaine a week over 25 years reveals how it ATE away at his nose and caused ‘lumps of flesh’ to fall off in grim pictures

A cocaine addict hooked on the drug for 25 years has shared graphic images of the impact the illegal drug had on his body.

Ian Higginson, from Wythenshawe near Manchester, spent almost £400-a-week on the drug, after becoming addicted in his late teens.

The 44-year-old said the years of abuse ‘destroyed’ his nose and caused ‘lumps of flesh’ to fall off.

Though, Mr Higginson has now been clean for almost a year. He opened up about his addiction in a Facebook post. 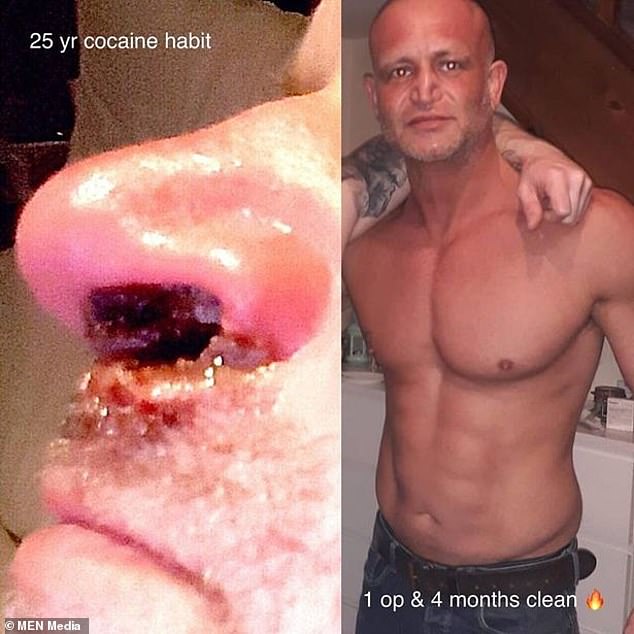 Ian Higginson, from Wythenshawe near Manchester, spent almost £400-a-week on the drug, after becoming addicted in his late teens (pictured left, his nose during his habit, and right, four months clean)

He wrote: ‘Cocaine has done me absolutely no favours at all… it’s only once you stop that you see it for yourself.’

Mr Higginson revealed how he became a slave to the drug, putting it before friends, family – and even himself.

‘My addiction started properly when I moved down south,’ he told The Manchester Evening News.

He became an air steward and often flew long haul to the Caribbean, where he said cocaine was ‘everywhere’.

Mr Higginson revealed that is when his addiction started to consume him. He described himself as being a ‘complete slave to it’.

He added: ‘When I was in the UK, I’d spend my days off working the doors as a bouncer, earning more cash, taking cocaine while working to keep me awake.

‘I was spending three, four hundred pounds a week on it, easy, sometimes even £1,000.

‘I’d set up a few businesses which were successful, but all the money from them went on drugs. 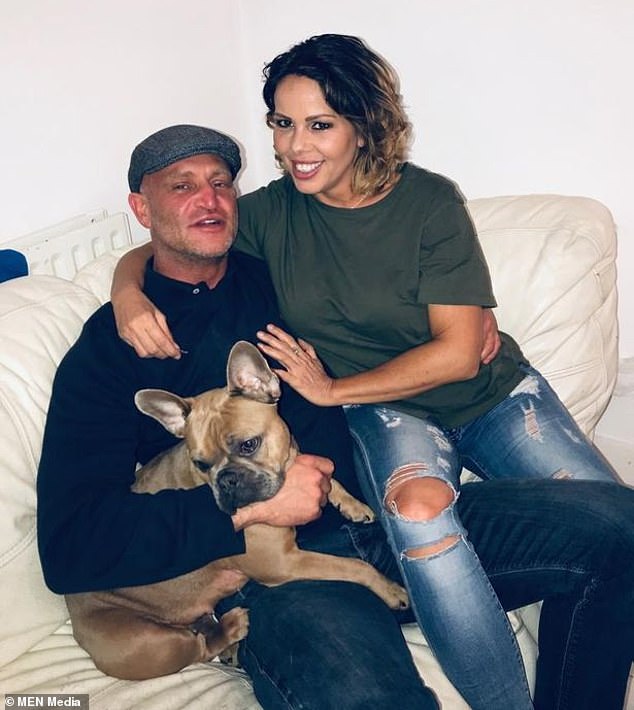 Mr Higginson has now been clean for almost a year. He opened up about his addiction in a Facebook post (pictured with his girlfriend Emma)

HOW CAN COCAINE DAMAGE THE NOSE?

Cocaine powder is ‘snorted’ into the nostrils, and although it is rapidly absorbed into the bloodstream, the drug also causes the blood vessels in the lining of the nose passages to shrink.

Shortly after use, the blood vessels widen again, and the red, runny stuffed-up nose of the recent user can be a telltale sign.

Repeated cocaine use leads to loss of blood supply to the septum (the thin bony dividing wall between the nostrils) which becomes damaged, leaving a hole between the two nose passages. The bridge of the nose may even collapse.

After five-and-a-half years, Mr Higginson changed careers and took a job in an office. But the drugs didn’t stop.

‘I was a functional user,’ he added. ‘I’d go to work every day as normal and then I’d come home and sniff cocaine. It just became the norm.

‘As my financial situation improved, the more coke I’d buy. Things got out of control and I couldn’t stop.’

Mr Higginson’s addiction to cocaine saw him hospitalised in 2016. He said: ‘When I blew my nose lumps of flesh would come out.

‘I was disgusting. The pain was so bad, but I’d still put coke up it to try and stop it.

‘I ended up really poorly in hospital, they said it was a brain infection and thought there may be cancer, but my nose was too badly destroyed to tell if it was carcinogenic or not.’

He underwent two biopsies and his nose collapsed. He found out he had an allergy to cocaine, and it was preventing his nose from healing properly.

Despite this, Mr Higginson kept using. He said: ‘It got to the point I knew I couldn’t keep doing what I was doing, so I checked myself into rehab.

‘I was there for about a month, and managed to stay clean for another month when I came out.’

However, on a night out he picked up a bag of the drug that had fallen onto the floor from another person’s pocket in a takeaway shop.

Mr Higginson said: ‘I put my foot over it, then when he left I picked it up, took it home and snorted it.

‘The temptation was too much. I could say no when it wasn’t around, but put it in front of me and I just didn’t have the willpower.’

It took several more years after this for Mr Higginson to finally kick the habit. He found himself in a very dark place, and knew it had to stop.

‘I’d had enough,’ he added. ‘I was sick of being skint, sick of putting cocaine before everyone else.

‘Sick of being out with people and just wanting to come home and sniff coke on my own in my own little world that didn’t exist, all alone, with no self-respect.

‘I reminded myself of all the reasons why I shouldn’t be doing it, how I felt when I wasn’t taking it. I’ve been clean now since June last year.

‘I’ve got no love for it, no craving, I’ve been in rooms with people doing it and I’ve just walked out. I’m not going back there.’

Mr Higginson is now working for a funeral planning company, and is in a happy relationship with his girlfriend Emma.

The pair had been on and off for nine years – and each time they split because of his drug use.

He said: ‘I feel amazing now. I am happy. In the past I have always felt like there was a hole that needed to be filled.

‘But now If I have a good day I have had a good day, if it’s bad then that’s just life. It’s like I have just reset myself.’

Mr Higginson’s eye-opening post has been shared hundreds of times, and he said he’s had a really positive response from it.

He said: ‘It is helping me to help other people. My addiction was like a jail sentence and since I’ve been clean I feel like I have been released.

‘There are so many people out there who are themselves or know someone affected by cocaine use, it is that wide of a problem.

‘I just want to give something back so that people can see if I can do it, so can they. Even if it helps just one person, it will be worth it.’