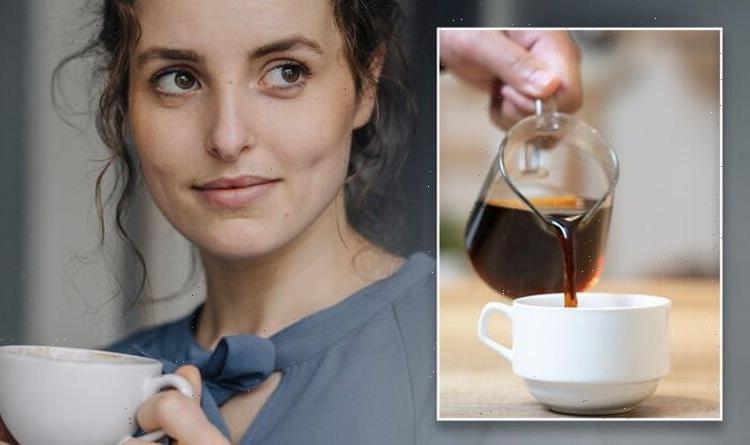 Most of us think of caffeine as soon as we think of coffee, but it has a number of great health benefits aside from its ability to make us feel more alert, according to Sophie Medlin, Doctify-reviewed consultant dietitian and director of CityDietitians. She explained: “In women in particular, the average intake of coffee has been shown to lower the risk of death from leading causes such as heart disease.”

And coffee is thought to have a positive impact on our brain health.

Medlin continued: “Coffee has been linked to a lesser risk of developing conditions such as Alzheimer’s and Parkinson’s, though studies are still ongoing.

Coffee intake does have associated risks, though this tends to be only in certain groups or when it is consumed excessively.

“Another at-risk group is pregnant women as high caffeine intake has been linked to complications such as low birth weight, the max recommended daily intake is 200mg in the UK.

“Excessive coffee consumption can have a knock-on effect on our sleep patterns and make it harder for us to not only doze off but maintain high-quality sleep throughout the night.”

So how much should you drink a day?

The recommended max daily intake of caffeine is between 300-400mg, the average cup of coffee contains between 80-100mg of caffeine.

This would mean around three to four cups of coffee maximum a day is within the safe limit.

But Medlin warned: “You may also be intaking caffeine from other sources that you may not be aware of, such as chocolate and sugar-sweetened beverages.

“Generally, intakes of above 600 mg have been linked to negative health effects such as high blood pressure, insomnia, and irritability.”

So when could coffee be negatively impacting your health?

If you feel you may be drinking too much coffee, you may have experienced symptoms such as headaches, irritability, chest pains, and trouble sleeping, said Medlin.

“Everyone is different, and you may find that even low amounts of caffeinated coffee can give you such symptoms, or you may be able to tolerate a higher amount.

“If you would like to cut back on your coffee intake, it is best to do so slowly and in stages.

“You may choose to opt for decaf more often, substitute coffee for another low caffeinated beverage (juice, herbal tea etc), or avoid drinking coffee late in the day.”

For most of us, drinking coffee in the morning to mid-afternoon will have the most potent and intended effects (such as alertness).

This is because the cycles of the hormone cortisol peak and trough at certain times of the day, it is thought that it is best to drink coffee/ingest caffeine when your cortisol levels are low.

Medlin added: “Though no studies have confirmed this, it may be best to consume coffee around mid to late morning and not as soon as you wake up.”

And what’s the best type of coffee to drink?

“Decaffeinated coffee is a popular option as well, it offers very similar health benefits though it will usually contain trace caffeine amounts.

“Additions to coffee such as sugar, whipped cream, syrup etc will all impact the nutritional content of your mug of coffee too.