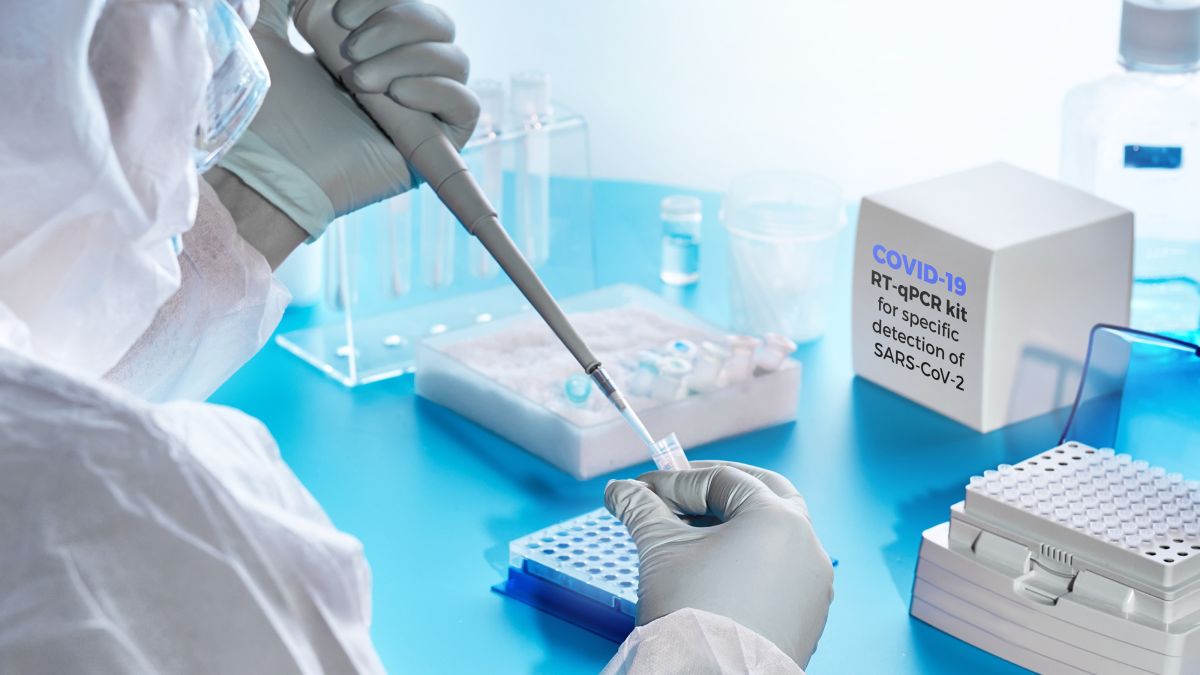 Getting tested for coronavirus in the U.S. has been difficult to impossible for many people, starting with technical difficulties with the kits initially developed by the Centers for Disease Control and Prevention (CDC) and continuing with shortages in swabs, reagents and other parts of test kits.

But despite these problems, private labs and companies are developing new tests to detect SARS-CoV-2, the virus that causes COVID-19. Some of these tests are designed to detect the virus without having to send samples to centralized laboratories. Others are blood tests that are meant to reveal whether someone has been exposed to the coronavirus in the past, even if they aren’t currently sick.

The emerging array of tests can be hard to keep straight. Below, we break down the different types of tests and highlight some of the new tests that are slowly becoming available.

PCR coronavirus tests: A swab and a wait

Most coronavirus testing discussed by public officials and the media refers to polymerase chain reaction testing, better known as PCR. These tests start with a nasopharyngeal swab, or a swab that goes up the nose far back into the throat. This swab collects mucous, saliva, bits of cells and — if present — viral RNA. The samples are then sent to a lab, where researchers apply chemicals to remove everything but the RNA. Enzymes are then added to transcribe the RNA into DNA. Next, this DNA is put into a real-time PCR (RT-PCR) machine along with another set of chemicals. The RT-PCR machine heats and cools the samples in a process that essentially Xeroxes the DNA, making thousands of copies of any genetic material in the samples.

Scientists then use sets of DNA fragments that complement fragments found in the coronavirus. If any viral genetic material is present, these fragments will bind to it. Chemical markers attached to the DNA release fluorescence when this DNA binding occurs. It’s these flashes of fluorescence that scientists use to determine whether the virus is present in a sample.

The CDC’s original failed test for the coronavirus was a PCR test. It did successfully detect SARS-CoV-2, said David Kroll, a professor of pharmacology at the University of Colorado Anschutz Medical Campus. But one of the chemicals used in the test also responded to non-coronavirus genetic material as if the virus were present — returning false positive results. After this failure, the Food and Drug Administration issued Emergency Use Authorizations for private labs and hospitals to develop their own coronavirus PCR tests. These tests still have to meet the CDC’s bar for accuracy, but they don’t have to go through the long process of typical FDA approval. As of March 30, 20 emergency authorizations had been granted for different tests. The up-to-date list is on the FDA website.

These privately developed tests differ slightly from one another. They may home in on different regions of the coronavirus genome, for example. And some are made to work with a specific company’s RT-PCR equipment, said Dr. Bobbi Pritt, a pathologist and microbiologist at the Mayo Clinic in Rochester, Minnesota. But these technical differences don’t change how the tests function.

Large companies are ramping up production of coronavirus tests. For instance, Roche’s test was given emergency authorization on March 13, and Stat News reported that the company could produce 400,000 tests a week. Likewise, Thermo Fisher Scientific plans to produce 5 million tests by April 3.

Typically, a RT-PCR tests take just a few hours to complete, according to ThermoFisher Scientific. But transporting samples to central labs takes time, as does preparing the samples to run. There have been reports of people waiting a week or more for test results as labs inundated with samples struggle to keep up.

The other limit to RT-PCR is that it detects only active infections. If someone has previously contracted the coronavirus and has recovered, RT-PCR won’t detect it.

Some companies are rolling out point-of-care tests, which are tests that can be done entirely within clinics or doctors’ offices — or even in the parking lot of a mobile drive-through testing site.

These tests can be helpful for letting medical professionals know right away if a patient has COVID-19, which might save valuable hospital space and personal protective equipment (PPE). A negative test means that a person might be sent home without concern for infecting others, or treated by health care providers without gear such as N95 masks. Quick testing might also help a sick doctor or nurse know whether they must self-isolate for 14 days or whether they can return to the front lines more quickly, Pritt said.

Point-of-care tests can use PCR or other methods of quickly copying the genetic material in a sample so that any viral genes are detectable. Regardless of the precise reactions used, these tests require a proprietary piece of equipment, usually around the size of a toaster, and a set of one-time-use cartridges that contain all the chemicals needed for the procedure. The patient gives a sample, usually via a nasopharyngeal swab, which is inserted into the cartridge. The cartridge goes into the testing device, which heats and cools it to facilitate the proper chemical reactions. The results come back in less than an hour.

Similar technology is already used for rapid testing for other viruses, such as influenza, said Laura Dullanty, the marketing manager for Mesa Biotech, a San Diego-based company that received emergency-use authorization from the FDA for a new 30-minute coronavirus test on March 24. Developing the test, which is PCR-based, wasn’t a huge technical challenge, said Melissa Obtera, a scientist and project manager at the company. The company used the CDC’s chemical primers as a starting point, along with the equipment it already has for flu and RSV (a respiratory virus most common in babies and toddlers).

The real challenge, Obtera told Live Science, will be producing the cartridges and testing systems quickly. The company must practice social distancing on the manufacturing lines to keep workers from falling ill. Nonetheless, Dullanty said, the company is currently working with several county health departments and hospital systems to get the tests into use.

Meanwhile, Illinois-based medical technology company Abbott announced that it had emergency-use authorization to ship its rapid coronavirus tests starting this week. The test can return positive results in 5 minutes and rule out the coronavirus in 13 minutes, according to a news release. It uses a set of proteins to amplify viral genetic material without the temperature changes needed in traditional PCR. The company plans to start shipping 50,000 tests a day by April 1.

Cepheid, a California-based biotech company, has also received emergency authorization for its point-of-care PCR coronavirus test, Live Science previously reported. The test can return results in 45 minutes, according to Cepheid. The company begins shipping the tests this week.

While the point-of-care tests have benefits, they likely won’t be a major factor in increasing overall testing rates, Kroll said. Abbott’s test, for example, can run a sample in 5 minutes, but that’s only one sample. Traditional PCR machines at central labs may take a few hours, but a machine can run large numbers of tests at a time. Many use standard 96-well plates, so they can run 96 samples at once. Thus, a point-of-care test might be able to provide quicker answers to individual patients, but they can]t handle the large numbers of tests needed to get a clearer picture of the pandemic.

Beyond detecting active infections, getting a handle on the pandemic will require tests that can detect anyone who has ever been exposed to SARS-CoV-2 — even if they fought it off without showing symptoms. These tests, called serological tests, search the blood for antibodies to the virus.

Knowing who has already been infected is important for three reasons, Kroll said. One, health care workers who have been exposed and likely have immunity can go to work with less fear, and perhaps use less PPE than those who have not been exposed. That could help ease the strain on scarce PPE supplies, Kroll told Live Science. In addition, by testing the general population, individuals may be able to ease their social-distancing routine and even go back to work first once stay-at-home orders ease. Finally, those who have been sick might be able to help cure those who are severely ill.

“Serology could potentially be used to identify people who have protective immunity that could help other people,” Pritt said.

It’s called convalescent plasma treatment, and it works on a simple principle: Those who have fought off the infection have antibodies in their blood that helps the immune system take down SARS-CoV-2. These antibodies can be isolated from the blood of recovered patients and then injected into patients who are ill. The hope is that the antibodies will start stimulating the sick patients’ immune systems to better fight the disease. This treatment is now being tested in New York City.

There are also efforts to import already-developed serological tests from other countries. For example, the distributor Ideal Rehab Care Inc. has been approved to import a test from a Singapore-based manufacturer, according to the distributor’s law firm.

Some companies are working on rapid serological tests that can be delivered at the point of care. SureScreen Diagnostics, for example has developed a testing strip to detect antibodies to the coronavirus in the blood; it works a bit like an at-home pregnancy test, with a paper readout and a colored line to indicate infection. The company touts the test as a way to work around the shortage of the swabs needed for PCR-based tests. But rapid antibody testing likely won’t help detect cases early, Pritt said, as it typically takes around 8 days for the body to mount an antibody response to the virus. Serological testing may be useful in some cases where someone has been sick for more than 8 days without access to a test for active infections, she said.

“When you get into serology, it’s more of these potential uses that we’re still learning a lot about,” Pritt said.

As coronavirus has shown itself to be widespread in the U.S., there has been some debate over the value of testing versus assuming anyone with symptoms has COVID-19, Kroll said. But even with widespread community transmission, testing can help track the disease, especially as it penetrates into lesser-hit regions.

“It’s too serious of a disease to back off on testing,” he said.

The one-month trial gives you access to all of the educational site’s 9,000 activities in reading, science, math and art. Keep your child busy and learning while we are all stuck indoors.
View Deal