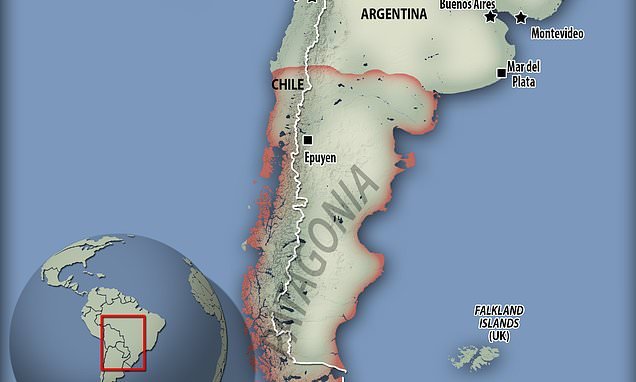 Nearly a dozen people have died in a rat-borne disease outbreak in Argentina.

Hantavirus has infected at least 29 people in the South American country, a majority of them female, and it has killed 11 of them so far, authorities say.

Earlier this month a judge ordered 85 people to stay in their homes to stop the virus, believed to have first broken out at a party, from spreading.

Although rare among people, hantavirus cannot be cured and kills up to 50 per cent of people who catch it. 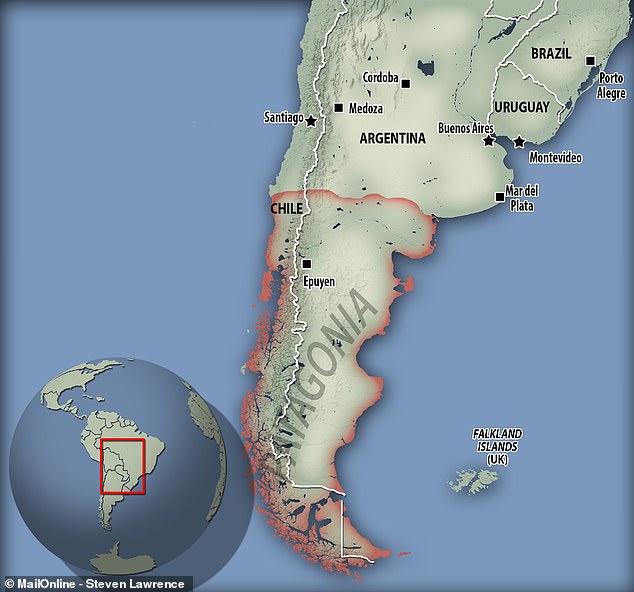 The outbreak is happening in Epuyén, a remote town of around 3,000 people near the Chile-Argentina border. The virus is believed to have spread after the first person to become infected went to a party and six other guests developed symptoms

The outbreak of the virus, spread by rats and other rodents, is happening in the remote town of Epuyén in the Chubuta province, around 900 miles south-west of Buenos Aires.

Hantavirus affects the lungs, causing flu-like symptoms to begin with, and is usually spread by contact with the droppings or saliva of infected animals.

More serious symptoms can appear with four to 10 days and include the lungs filling with fluid, causing coughing and shortness of breath.

One survivor described the sensation as feeling like ‘a tight band around my chest and a pillow over my face,’ according to the US Centers for Disease Control and Prevention (CDC).

Epuyén’s outbreak began in October 2018, and the 29 lab-confirmed cases so far happened between then and January 20, 2019.

The first person to become infected is thought to have caught it from an animal then attended a party in Epuyén, after which another six people developed symptoms.

A local judge recently ordered 85 residents of the remote town, which has a population of around 3,000, not to leave their homes for at least 30 days. 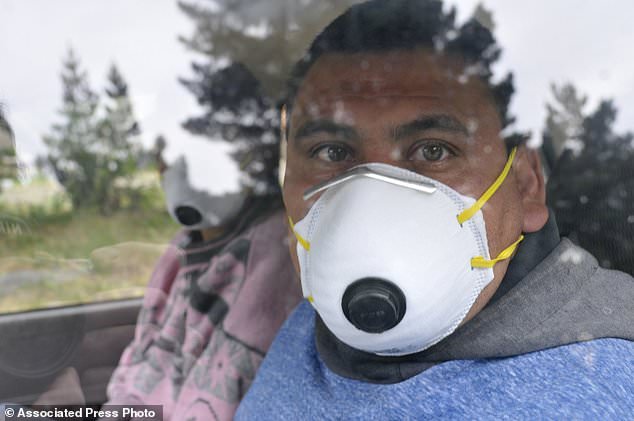 A fruit harvester wearing a face mask looks out the window of his car in Epuyén, Argentina, where a judge ordered dozens of people not to leave their homes because of a virus outbreak 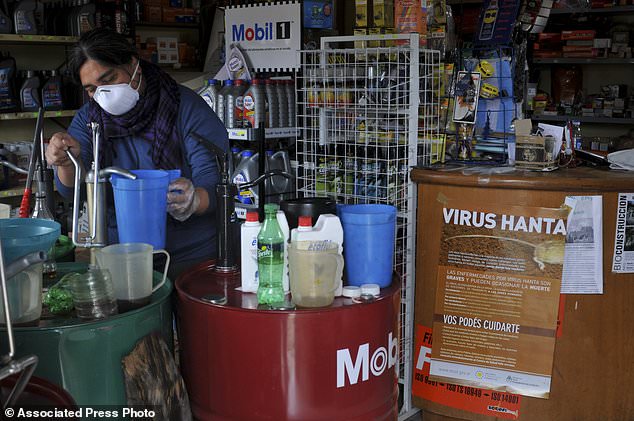 A woman works at her shop, which has a warning sign about the hantavirus as an outbreak in the town has killed at least 11 people and infected another 18, the WHO reports 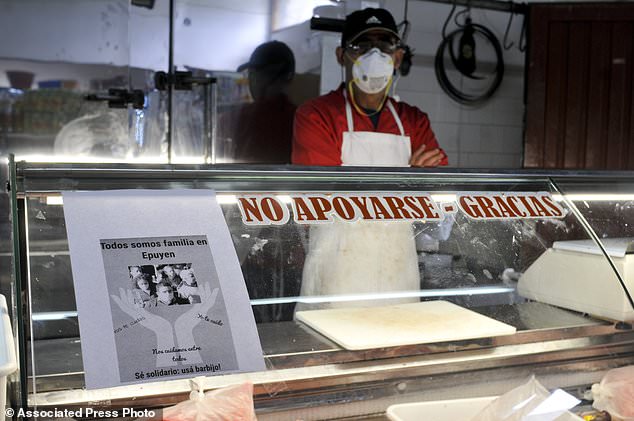 A man in Epuyen wears a mask and waits for clients at his shop, with a sign that says in Spanish ‘We are all family in Epuyén – be supportive, use a mask’

Some had refused to isolate themselves voluntarily as authorities tried to contain the outbreak.

The WHO is advising local health officials to try harder to detect, investigate and control cases of the disease.

And it said they should pay particular attention to travellers returning from affected areas.

Officials in Epuyén have temporarily banned gatherings in public buildings, including funerals, as a precaution.

Everyone who has caught hantavirus so far has had some form of contact with another of the patients, suggesting it is spreading between people.

But the WHO said it is still investigatin whether this is the case. A further 98 contacts are being monitored in case they start to show signs of illness.

Between 2013 and 2018, there were 114 confirmed deaths from hantavirus in Argentina – an average fatality rate of 18.6 per cent, although it was close to 40 per cent in some areas, the WHO said.

Community outbreaks of hantavirus are not commonly recorded but there were isolated cases in which people died of it in the US last year.

Nine-year-old Fernando Hernandez, from Bloomfield, New Mexico, died after he caught the disease and suffered a stroke.

And Kiley Lane, a 27-year-old mother from nearby Farmington, died after contracting the illness and mistaking it for flu, then dying of organ failure.

Hantavirus is found in rodents such as mice and rats.

Humans can contract the virus by coming into contact with infected rodent droppings, urine, saliva and nesting materials, and it can also be spread from person-to-person.

Diagnosis can be difficult because early symptoms often resemble other more common viruses such as the flu.

The virus can lead to Hantavirus Pulmonary Syndrome (HPS), a condition which infects the heart, lungs and other organs by weakening blood vessels and causing them to leak.

The body attempts to fight the virus by creating inflammation which, combined with the organ infection, leads to intense damage throughout the body.

In the lungs, leaky blood vessels cause flooding in the air sacs, making it difficult for patients to breathe.

When the virus infects the heart, the damage reduces the organ’s ability to circulate blood through the body. This causes critically low blood pressure and a lack of oxygen throughout the body, which can quickly lead to organ failure and death.

The virus is fatal in between 35 and 50 per cent of cases.