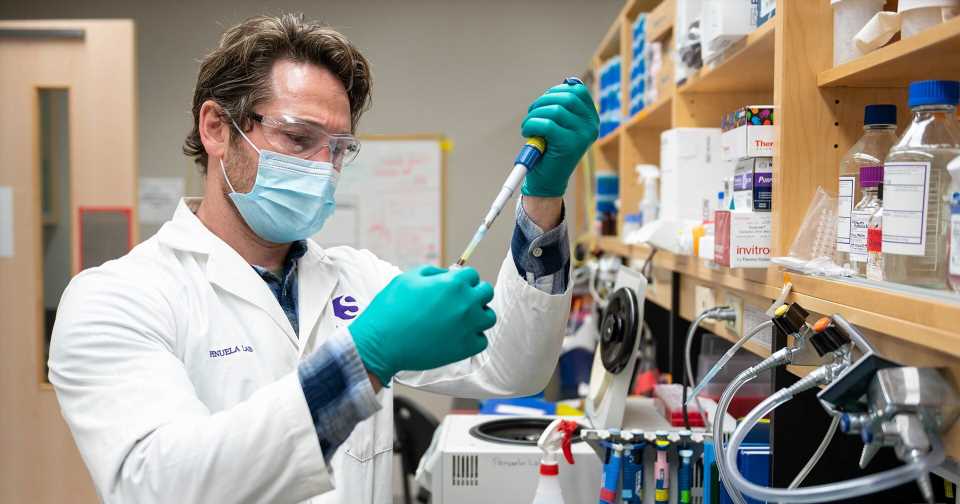 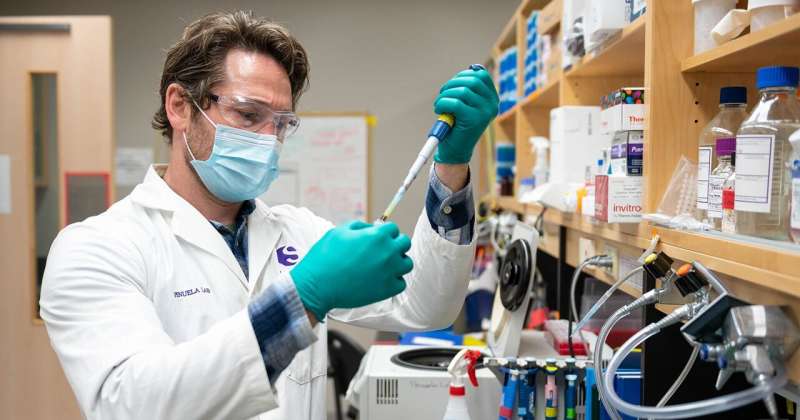 It sounds too good to be true: blocking a gene linked to obesity to trigger a major reduction in body fat.

While it’s not a reality for humans yet, it could be one step closer thanks to new discoveries from a team of anatomy and cell biology researchers in a lab led by Silvia Penuela at Western’s Schulich School of Medicine & Dentistry.

The team has discovered that deleting a specific gene in male mice results in a reduction in fat and an increase in muscle mass equivalent to working out one hour per day, five days a week for six weeks.

It’s a remarkable finding that Penuela said could eventually have a significant impact on obesity treatment.

In this recent study led by Ph.D. candidate Brent Wakefield, published in the International Journal of Obesity, the Penuela Lab examined a gene called Pannexin 3 (PANX3) and its impact on fat tissues in mice.

The study involved collaboration with other labs at Western, including professor Frank Beier’s, and at the University of Toronto.

In the human body, there are three Pannexin genes that encode for the channel forming proteins. These channels are thought to act as pores in the cell membrane and aid in cell-to-cell communication.

“Think of them as cell phones. You have a certain number of cell phones at the edge of your cells that send messages to other cells, telling them when to grow, when not to, and when to do other functions,” Penuela said.

PANX3 is highly expressed in the adipose fat cells of the body.

When the PANX3 gene was deleted from mice in embryos—a novel model developed by Penuela’s team—their bodies were significantly leaner and had more muscle mass as they aged.

“The PANX3 knockout mice, without any exercise, had the same body composition as mice that were exercising,” Wakefield explained.

Male mice without the PANX3 gene had on average a 46 percent reduction in fat mass across the whole body compared to those with the gene.

However, the effect was only found in male mice, not females. Penuela’s team is still examining why that might be the case.

Additionally, the male mice with deleted PANX3 also showed much lower levels of inflammation in visceral fat tissue, a major indicator of obesity linked to other comorbidities like cardiovascular disease and diabetes.

“We saw a significant reduction in the inflammation markers in the fat,” Wakefield explained. “Deleting the gene had a greater effect than even exercise, which we know is anti-inflammatory.”

The mice without the PANX3 gene also appeared to have fewer fat cells overall.

The Penuela Lab is now looking to develop PANX3 pharmaceutical blockers that could be used to suppress PANX3’s function in humans.

“If we can block it, we can hopefully have the same effect as deleting it,” Penuela said. “We hope to one day help patients suffering with obesity.”

Despite promising findings from the collaborative study, Penuela said there’s an important caveat to the research.

While the reduction in fat mass and increase in muscle was equivalent to working out one hour a day for six weeks, a healthy diet must be maintained.

“If you had a high fat diet—eating burgers and fries all the time—it doesn’t matter how much you delete or block the PANX3 gene,” Penuela explained. “It’s not the same effect.”

“When we fed mice without the PANX3 gene a high-fat diet, the differences in body weight were gone,” Wakefield said. “Diet is always really going to matter.”

The researchers have partnered with WORLDiscoveries—Western’s technology transfer office—to explore the development of gene-blocking drugs with industry partners.

“These findings could lead to development of novel strategies and pharmacological targets to PANX3 channel function in the comprehensive management of obesity and inflammatory diseases,” said Saqib Sachani, business development manager at WORLDiscoveries. “This provides a new target for therapeutic intervention. The next step will be working closely with a partner to identify and develop pharmacological blockers.”

Penuela acknowledged obesity is a complex disease, impacted by genetics and lifestyle factors.

While she said exercise and a healthy diet are still the most important factors in creating a healthier body composition, a PANX3 blocker could be a game-changer for those with obesity.

“If we could have a combination of therapies, a healthy diet, some exercise, and can block this channel, it would really speed up the way a person with obesity could respond to treatment,” she explained.

The study also found exercise and diet can play a role in regulating PANX3. When mice ate poorly, their PANX3 levels increased in fat tissue. On the flip side, exercise decreased PANX3 levels.

As the team explores creating a PANX3 blocker, its next steps also include further research on the gene in humans, which could lead to new clues as to why some individuals are more prone to gaining weight and others are more naturally fit.

Penuela said her lab aims to analyze PANX3 in human genomic sequences, searching for mutations that could determine why some people are more prone to accumulate fat.