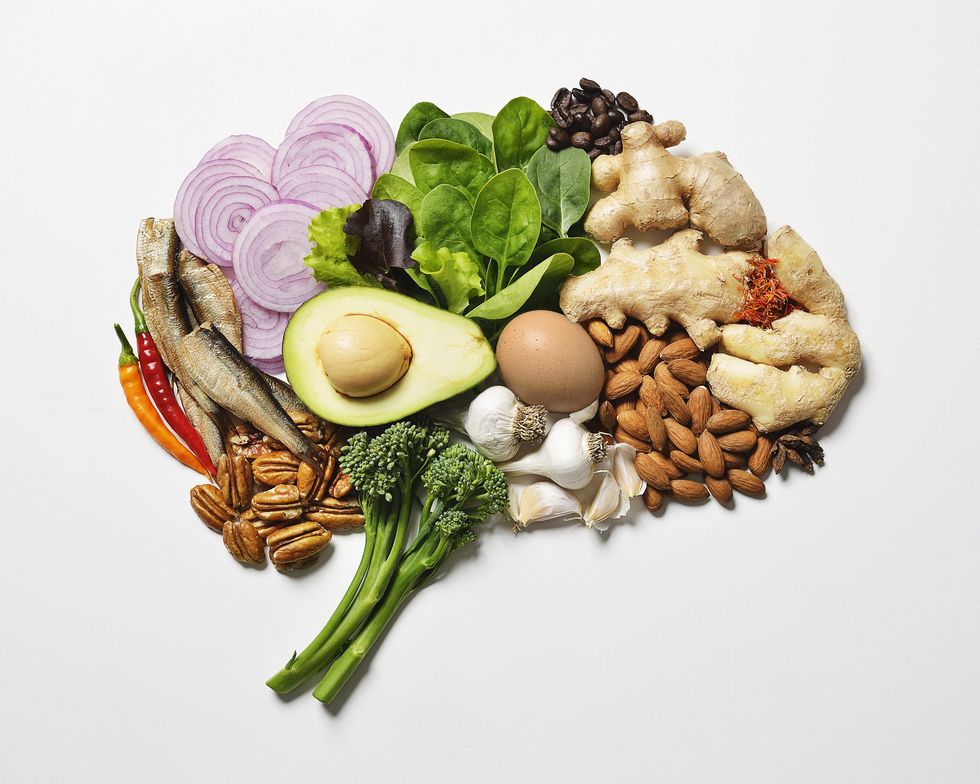 In my training as a psychiatrist, I’d never been taught to ask my patients what they were eating. When I did finally start, the results were startling, to say the least. People who made even a few small dietary tweaks began feeling better and sometimes were able to decrease the dosage of their medication.

It may seem as if making a couple adjustments to your diet as an intervention for depression is too good to be true, but think of it this way: The brain is an expensive machine to run. Despite weighing only about three pounds, the human brain consumes nearly 20 percent of the calories you eat each day. Its optimal functioning depends upon key nutrients that give it the building blocks and supporting molecules required to back its cells, neurotransmitters, and insulating white matter. That’s why assessing nutrition and food choices should be an integral part of treating and preventing mental-health disorders.

Today, many doctors advocate a more Mediterranean-style diet, and we understand that by focusing on fruits, vegetables, fish, whole grains, and healthy fats, it provides the essential nutrients that support mental health. But instead of pinpointing a specific diet that helps your brain, I prefer to recommend eating more from certain food categories that contain high levels of brain-healthy nutrients (see below.)

The evidence that eating healthy, whole foods is beneficial to your mind is becoming clearer and clearer. More than 60 years ago, studies that looked at the health of people who adopted the Mediterranean way of eating found that it was instrumental in reducing the risk of heart attack and stroke. Later it was linked to lower rates of dementia and depression.

Studies kept mounting, and plenty of data showed that diet matters when it comes to depression and anxiety. But it was hard to definitively argue that psychiatrists should be prescribing dietary changes, because there was no “gold standard” trial (a randomized, controlled clinical trial) to indicate that. In 2017, scientists from Australia’s Food & Mood Centre at the Deakin University School of Medicine published the first one.

This research, done by two leaders in the field of nutritional psychiatry, Felice Jacka and Michael Berk, looked at what happened to 67 people with major depressive disorder (many of whom were already taking medications or doing talk therapy) over 12 weeks when they received either coaching on eating a Mediterranean-style diet or “befriending” sessions—social support that provides the sort of connections that tend to be helpful to those with depression. The researchers found that about one third who received the nutrition coaching saw their depression completely resolve. Since then, other trials have shown that dietary changes can help reduce or even eliminate depressive symptoms.

“There were so many stunning things that came out of this trial, but I think one of the biggest is that people could improve their diet even though they had clinical depression at the moderate to severe level,” Jacka said.

When you put it all together, you see that these are extraordinary results showing that a change in your diet has the power to change your mental health. By replacing junk foods with those that contain brain-boosting nutrients, you can improve your brain’s overall health and function. Ultimately you, and only you, have the power to decide what you’d like your brain to be made of—and in doing so, put it into a mode of growth, resilience, and health.

A short list of foods to beat anxiety and depression

Foods from the groups below contain the important nutrients that feed the good bugs in your gut, reduce inflammation, and put your brain into “grow” mode—all things that can help with depression and anxiety. Pick the foods you enjoy eating most from each category, and fill up on more of them.

Leafy vegetables give you the most bang for your buck when you’re talking about nutrient-density-to-calorie ratios. Spinach, kale (such a favorite of mine that I even wrote a book on it), arugula, collards, beet greens, and chard are all great for fiber; vitamin C can counteract free-radical damage in brain cells; vitamin A is linked to the brain’s ability to grow and adapt; and folate helps support the creation of new cells.

Aim for: One to two packed cups of chopped greens per day.

Get more: Blend kale into a smoothie; add watercress to cheesy scrambled eggs.

Eating fruits and vegetables of many colors is a smart way to get a range of important plant nutrients, plus fiber for the good bugs in your gut to thrive on. The nutrients in purple produce like eggplants and blueberries, for instance, have amazing anti-inflammatory properties. Orange options have carotenoids for vitamin A.

Aim for: At least half a cup of rainbow produce at each meal.

Get more: Roast them, stir-fry them, or use tomatoes and bell peppers as the basis for pasta sauces and stews.

Seafood helps you get the long-chain omega-3 fatty acids that your brain so desperately needs to stimulate nerve-growth factors and dampen inflammation. It also delivers minerals like zinc, iodine, and selenium. Check out bivalves for ample B12.

Aim for: Two or three seafood meals each week.

These are rich in brain nutrients, including fiber; zinc, which helps regulate brain signaling and adaptation; and iron, important in building a protein in red blood cells that helps transport oxygen from the lungs to the brain. They offer a nice mix of healthy fats and protein.

Aim for: At least a small handful every day.

Get more: Add walnuts into a morning smoothie; throw red or black beans into your favorite soups or stews.

As a former vegetarian, I understand that many of us feel conflicted about eating meat. Some people won’t ever do so, and that’s fine. That said, meat is a remarkable source of iron, protein, and vitamin B12, which is central to your production of the mood-regulating chemicals serotonin, norepinephrine, and dopamine.

Aim for: Three servings per week (but not required).

Get the right stuff: Grass-fed beef has fewer calories and better fats for your brain than meat from grain-fed cows does.

Eggs have protein; B vitamins, which help regulate brain chemicals; and choline, a cousin to certain B vitamins that has been linked to fewer anxiety symptoms. Fermented dairy products like yogurt and kefir are full of good bacteria.

Aim for: Five to seven eggs and three to five servings of dairy (ideally, fermented) a week.

Get more: Whip up a vegetable frittata; crack open a yogurt for an afternoon snack.

Adapted from the book Eat to Beat Depression and Anxiety, by Drew Ramsey, M.D. Copyright © 2021 by Drew Ramsey. Published by Harper Wave, an imprint of HarperCollins Publishers. Reprinted by permission.