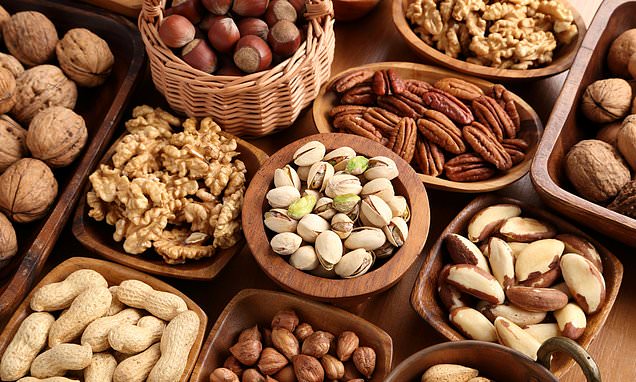 Chewing a handful of nuts each day could keep your weight down, say Harvard scientists

Eating half a serving of nuts every day could stop you from gaining weight as you get older, research suggests.

Experts tracked almost 300,000 people for around two decades. They were asked about how many nuts they ate and how much they weighed.

Results showed participants who ate half an ounce (14g) of nuts every day gained less weight and were less likely to become obese.

Scientists now say replacing unhealthy snacks, such as chocolate, with nuts could slow down the dreaded middle-age spread. 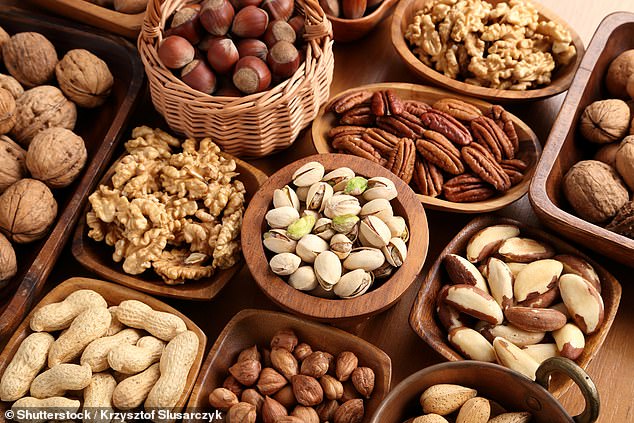 Experts tracked almost 300,000 people for around two decades. They were asked about how many nuts they ate and how much they weighed

The researchers say the study cannot establish cause and relied on self-reported data, which can prove to be inaccurate.

But they suggest that chewing nuts takes more effort than eating fast food, while the high fibre content can make people feel full for longer.

Nut fibre also binds well to fat in the gut, meaning more calories are excreted, the researchers wrote in the published paper of their study.

Nuts are rich in healthy unsaturated fats, vitamins, minerals and fibre, but are not often consumed for weight loss because they are calorie dense.

But there is evidence to suggest that quality of diet as well as counting calories plays a role in weight management.

Participants were asked every four years to state their weight and how often they had eaten a serving of nuts. They reported their exercise every two years.

Increasing consumption of any type of nut was linked to less long-term weight gain and a lower risk of becoming obese.

Substituting snacks for half a serving of nuts was found to prevent around 0.9 to 1.5lbs (0.41-0.7kg) of weight gain over the following four years.

While upping daily nut consumption from none to half a serving was linked to preventing almost 1.6lbs (0.74kg) in weight gain.

And a consistently eating at least half a serving of nuts each day had a similar effect, the researchers wrote in the BMJ Nutrition, Prevention and Health.

Analysis of the data suggested eating half a serving of nuts each day – of any kind – was linked to a 23 per cent lower risk of becoming obese.

In terms of individual nuts, eating an extra half a serving of walnuts a day lowered the odds of becoming obese of the next four years by around 15 per cent.

No such associations were observed for increases in peanut butter intake, according to the researchers led by Dr Xiaoran Liu.

The findings remained true after taking account of changes in diet and lifestyle, such as exercise and alcohol intake.

Adults in the US pile on 1lb (0.45kg every year, on average. It is thought British adults gain a similar amount of weight.

Gaining 5.5-22lbs (2.5-10kg) in weight is linked to a significantly greater risk of heart disease/stroke and diabetes.

Testosterone is said to be one of the secrets to men having naturally slender physiques.

The hormone – a hydrophobic molecule – likes to stick to fat, meaning less fat lingers around the middle.

Lower testosterone levels make it easier for the body to store fat. Equally, obesity impairs the production of testosterone.

As men age, testosterone levels naturally decrease, at a rate of about 1 percent a year after the age of 30.

This means belly fat starts to creep in.

The female body has a delicate balance of progesterone and estrogen.

Higher levels of estrogen contribute to fat tissue formation. In younger women, this is offset by strong levels of progesterone.

From the age of 35 onwards, levels of both hormones decrease, leading up to menopause.

However, progesterone levels decrease at a faster rate – causing fat tissue to form at a seemingly less controllable rate than before.

The loss of muscle mass is one of the greatest factors that leads to a slow metabolism.

Muscle tissue is the largest consumer of glucose in the entire body.

If you can’t contain your lean muscle mass as you age, there’s less to consume that glucose.

In turn, that glucose can convert into lingering body fat.

As a result, your body does not process carbs as swiftly as it once did.

HOW TO BEAT IT

‘While aerobic workouts are beneficial for heart health, muscle building is just as important to protect yourself from developing inflammation and diabetes.

Resistance training is an umbrella term for any exercise that causes muscles to work against some form of resistance – either weights or your own body weight.

Some exercises include planking, squats and bicep curls.

Protein shakes are marketed to 20-something gym buffs looking to beef up their muscles.

But the nutrient is essential for older people to build muscle and keep metabolism stable.

Protein is essential because it fills your body with the amino acids to repair and replenish damage – and you also need it if you want to build muscle.