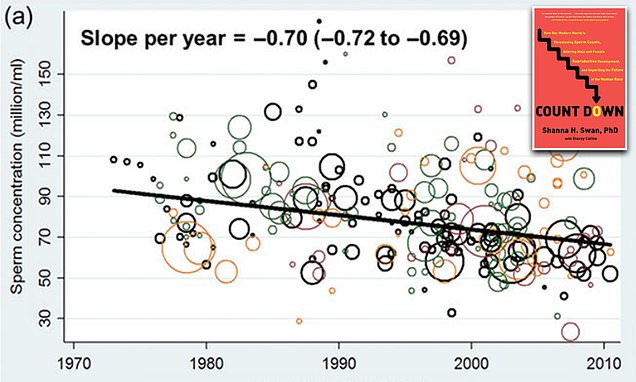 More than 40% of people will need technological help conceiving children by 2050, expert predicts: Provocative book claims ‘everywhere chemicals’ have driven sperm counts down by more than 50% in the past 40 years

Human life has transformed profoundly – and is changing exponentially faster – over the short 200,000 years man has walked the Earth.

But for the vast majority of humans, sexual reproduction hasn’t changed much. Only about 1.9 percent of all babies born in the US were conceived using artificial reproductive technology. 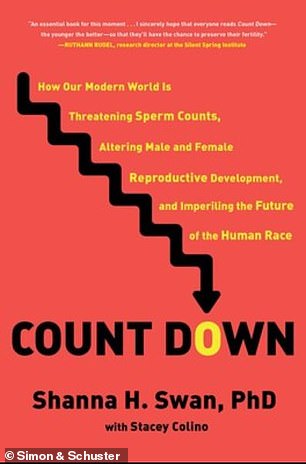 By 2050, that will change, claims Dr Shanna Swan in a provocative new book, ‘Count Down: How Our Modern World Is Threatening Sperm Counts, Altering Male and Female Reproductive Development, and Imperiling the Future of the Human Race.’

Dr Swan, a renowned environmental and reproductive epidemiologist at the Icahn School of Medicine at Mount Sinai, predicts that by then, a large proportion of people around the world will not be able to conceive without technological assistance.

That will be the result of declining sperm count among men around the world, she says.

Dr Swan is also the author of a ground-breaking 2017 study that revealed that sperm counts around the world have fallen by more than half over the past four decades.

And all signs suggest the downward trajectory will only continue in the decades to come.

There are many drivers of infertility, but Dr Swan has homed in on a sneaky prime suspect: household chemicals called phthalates. 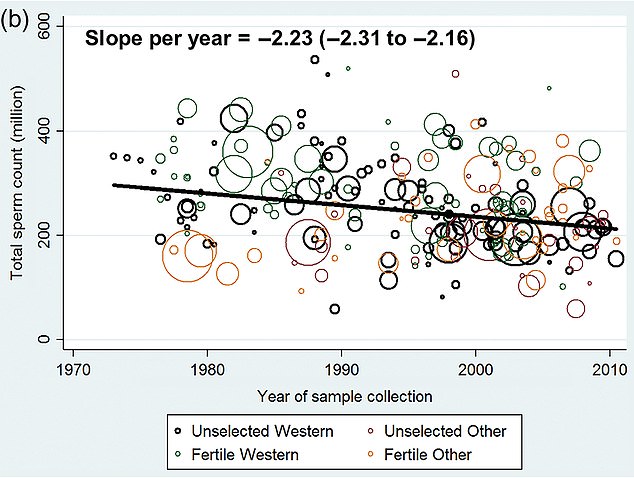 Dr Shanna Swan’s 2017 study found that Western men’s sperm counts declined more than 50% between 1973 and 2011, falling about 1% a year. She believes that chemicals called phthalates are a prime suspect

Phthalates are in all manner of products. They make plastics pliable, they make it possible for our skin to absorb lotion and they help make food packaging like cellophane stretchy and air-tight.

But they seep from these packagings into our food and into our bodies where they do something much more insidious, disrupting the endocrine system that controls hormones, including testosterone.

WHAT ARE PHTHALATES AND HOW DO THE AFFECT FERTILITY?

Phthalates are a group of chemicals used to make plastics more flexible and harder to break.

They are often called plasticizers. Some phthalates are used as solvents (dissolving agents) for other materials.

Phthalates are used widely in polyvinyl chloride plastics, which are used to make products such as plastic packaging film and sheets, garden hoses, inflatable toys, blood-storage containers, medical tubing, and some children’s toys.

HOW DO THEY AFFECT HEALTH?

Some types of phthalates have affected the reproductive system of laboratory animals.

More research is needed to assess the human health effects of exposure to phthalates.

Phthalates seem to disrupt a circuit that exists between two parts of the brain and male of female reproductive organs.

It’s known as the HPG axis, for the hypothalamus and pituitary glands – hormone-regulating parts of the brain – and the gonads, which are the testes in a man, or the ovaries in a woman.

This circuit controls a tight feedback loop that produces sex hormones that play critical roles in sex drive and sexual reproduction, and also come right back to the HPG axis, and help regulate it.

Anything that throws this axis off-kilter will also throw off the levels of sex hormones, including testosterone and estrogen. If the effects are strong or sustained enough, that can disrupt reproduction.

Scientists think that the way phthalates bind to receptors in the HPG axis also do just this.

Dr Swan and many other scientists believe this is a primary drive of men’s plummeting sperm counts.

Men that have a sperm count below 15 million sperm per mL or 39 million per ejaculate are at risk of being infertile, according to the Mayo Clinic, although the shape and motility – or movement – of sperm matter, too.

One in seven couples in the US are already estimated to be infertile, as a result of fertility issues contributed by one or both partners.

Individually, about nine percent of men were estimated to be infertile already in 2018, the CDC’s latest estimate.

She found that sperm counts among Western men had declined by nearly 60 percent between 1973 and 2011.

On average, sperm counts declined by a little more than one percent each year.

At that rate, the share of men who are infertile would now be around 12 percent. And if that continues, by 2050, 41 percent of men will be infertile.

As sperm counts and quality decline, much of the population will be forced to use assisted reproductive technology (ART), Dr Swan told DailyMail.com.

She calls this outcome ‘a third step’ in a cascade of issues.

‘Preceding that, you have to start with the decline in sperm counts and semen quality, including decreased fertility, and fact that if men’s sperm counts get really low, your only option, really, is to use assistive reproductive technology,’ Dr Swan said.

Her study shows that sperm counts have been declining since at least 1973, but few of its scale had been done before, so it’s hard to say when things really started to turn downward.

Phthalates were invented in the 1920s, and became commercially available in 1931.

They started out mainly being used in PVC, a tough but stretchy plastic, and products like insect repellent.

But they’ve exploded since then. They’re in your beauty products, including shampoo, nail polish and sanitary pads, they’re in faux wood flooring made of vinyl, they’re in IV bags and shower curtains, oils, detergents and likely any food wrapped in plastic.

And they’re probably in you.

A CDC study that measured the metabolites of phthalates in Americans between 2003 and 2004 found ‘measurable levels of many phthalate metabolites in the general population.’

The agency actually found that levels in women were even higher than in men, likely due to the presence of the chemicals in shampoo and cosmetics.

CDC researchers noted that the detection of these chemicals doesn’t necessarily mean that they are harming someone.

But Dr Swan’s research suggests that while ingesting or otherwise absorbing phthalates at the low but daily levels most of us do may have subtle effects that are easily conflated for other issues.

Factors like obesity and exercise also have a demonstrated effect on fertility, in both men and women. 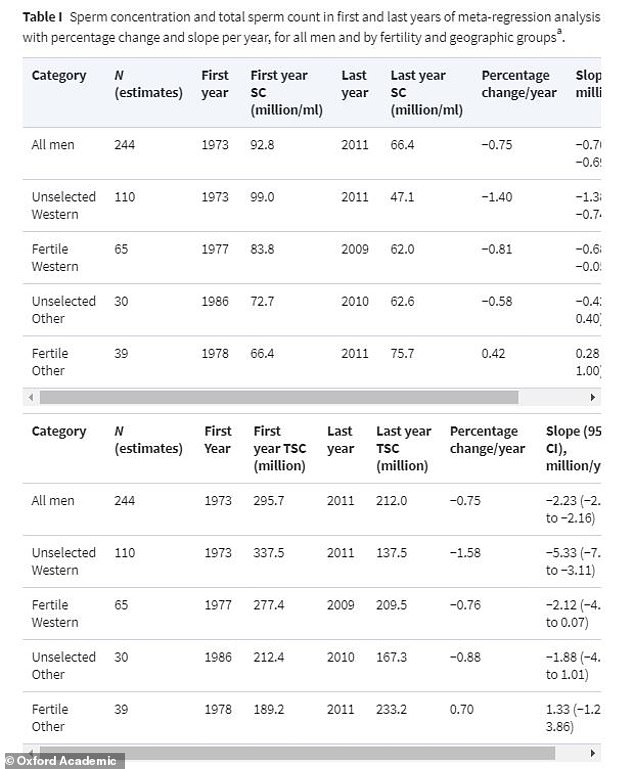 The declines in sperm counts were most evident in Western men who didn’t know their fertility status (‘Unselected Western’). On average, these men had 337.5 sperm per mL of seminal fluid. By 2011, that number dropped to 137.5 per mL

Asked by Future Human how much phthalates are contributing to men’s fertility decline, versus obesity and other factors that are on the rise, Dr Swan explained that we don’t know yet, but they’re likely intertwined.

‘That’s a great question, and I don’t know the answer to that. I believe, based on my work, that it is substantial,’ she said.

‘But even the lifestyle factors that appear to be quite different from these chemicals are not really that different.

‘For example, one lifestyle factor that affects fertility is obesity. A number of these chemicals are obesogens. They cause obesity, they interfere with the hormones that are related to satiation and metabolism. They make us more likely to get fat, and so obesity is on the pathway between exposure and infertility.’ 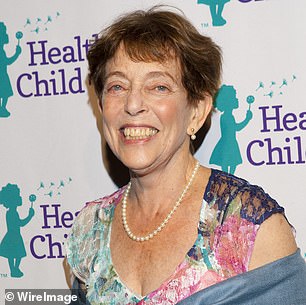 She also added that men who worked jobs involving BPA – a type of phthalate used in food packaging – had higher rates of erectile dysfunction, while women who had higher levels of the chemicals in their bloodstreams were more likely to say they were sexually unsatisfied.

Many signs point to the the effects of phthalates on sex, but what exactly are they doing?

Phthalates seem to disrupt a circuit that exists between two parts of the brain and male of female reproductive organs.

It’s known as the HPG axis, for the hypothalamus and pituitary glands – hormone-regulating parts of the brain – and the gonads, which are the testes in a man, or the ovaries in a woman.

This circuit controls a tight feedback loop that produces sex hormones that play critical roles in sex drive and sexual reproduction, and also come right back to the HPG axis, and help regulate it.

Anything that throws this axis off-kilter will also throw off the levels of sex hormones, including testosterone and estrogen. If the effects are strong or sustained enough, that can disrupt reproduction.

Scientists think that the way phthalates bind to receptors in the HPG axis also do just this.

And since they also wreak havoc on hormones that makes us feel full or hungry and contribute to obesity, phthalates are making a powerful two-pronged attack.

Phthalate exposure isn’t a health problem with an obvious treatment though. For one, they’re everywhere. In fact, scientists often refer to them as ‘the everywhere chemicals.’

You may not even know you’re using a product with them. Legally, if they’re used in an ingredient that adds scent to a product, they can simply be disclosed as ‘fragrance.’

Phthalates pass through the body relatively quickly, but they are so pervasive that we’re constantly inundated with them, and they seem to have enough time to interfere with hormones during their short trip through the human body.

And they seem to pass to our offspring as well.

‘The chemicals are out there and they’re not going away. But she’s shown that if you take a male who’s been exposed and you stop the exposure, it will take three to four generations, but they will be back to reproductive health.’

She calls this ‘good news,’ but it requires that phthalates be eliminated.

And since we’re nowhere near that, fertility stands to suffer in the future – and already is, Dr Swan says.

‘I think it’s a major problem. For example, the rate of surrogacy has gone up. The rate of assisted reproduction has gone up,’ she told Future Human.

‘More and more, we’re leaning on those technological solutions to have children, and I don’t think people are completely happy with reproducing that way.’