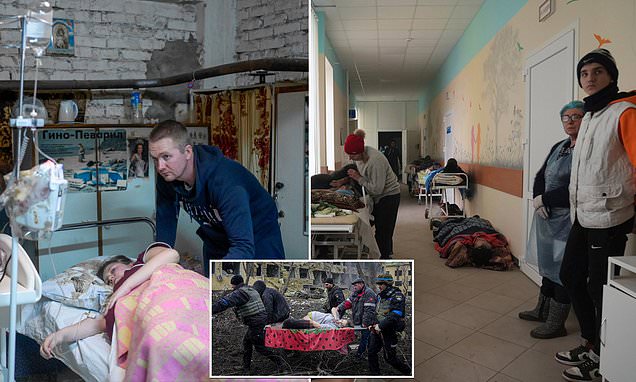 Experts fear that infectious diseases like Covid, polio and measles will rampantly spread among displaced Ukrainians amid the Russian invasion as their focus shift to survival at all costs amid the devastating invasion.

The war has leveled cities, killed hundreds and displaced millions from the Eastern European nation. Public health officials are warning that the lasting impacts of such a large-scale invasion will have long-reaching effects.

The rampant spread of infectious disease, especially Covid, is expected in the coming weeks as Ukrainians abandon virus-protocol and enter a survival mode.

Women who are pregnant or people who are dealing with tuberculosis (TB) or HIV will likely be in danger as well due to the lack of accessible treatment.

While there is little health officials and doctors can do to fight off the Russian invasion, some are still hoping they can help the Ukrainians affected by the war in different ways. 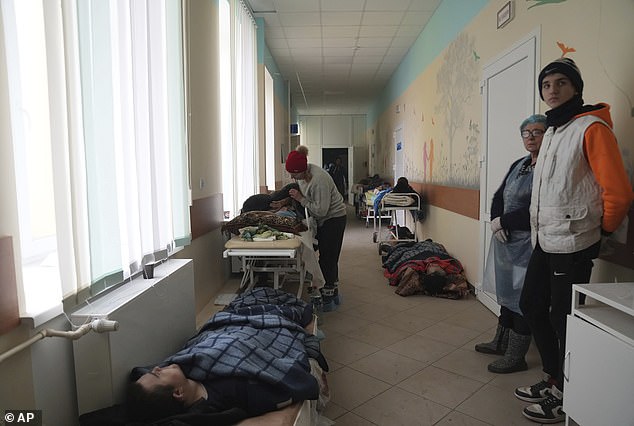 The Russian invasion of Ukraine has had a devastating impact on the nation’s healthcare system, with hospitals and other facilities being destroyed in combat. The WHO reports at least 31 events of an attack against Ukrainian healthcare. Pictured: People receive treatment in the hallway of a Mariupol, Ukraine, hospital 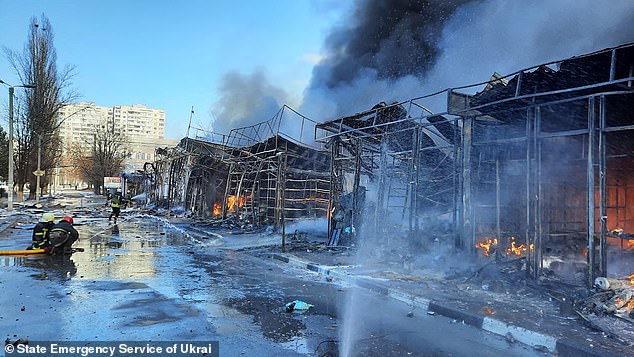 Russian attacks have also destroyed many apartment buildings, and other facilities Ukrainians use in every day life. In the process, the people of the country have been put at risk

‘I am very, very worried for Ukraine. First and foremost, that this may lead to a long-term conflict that will completely destroy the health system,’ Lucica Ditiu, executive director of the Stop TB Partnership in Switzerland told nature.

The Russian invasion, which began in late February, has been brutal to the civilian population.

There are reports that apartment buildings, powerplants, airports and even hospitals have either been hit by airstrikes or been the site of military combat.

A hospital in Mariupol, along the southeast coast of the nation, was struck by a Russian attack last week.

Photos emerged of a pregnant woman giving birth in this hospital at the time of the attack being carried out on a stretcher, which became a symbol of the devastation facing Ukrainians.

This week, it was learned that the woman and her child died as a result of the strike.

The World Health Organization (WHO) reports that 4,300 births have been performed in Ukraine since the war first broke out three weeks ago, and an estimated 83,000 women are expected to give birth in the coming months. 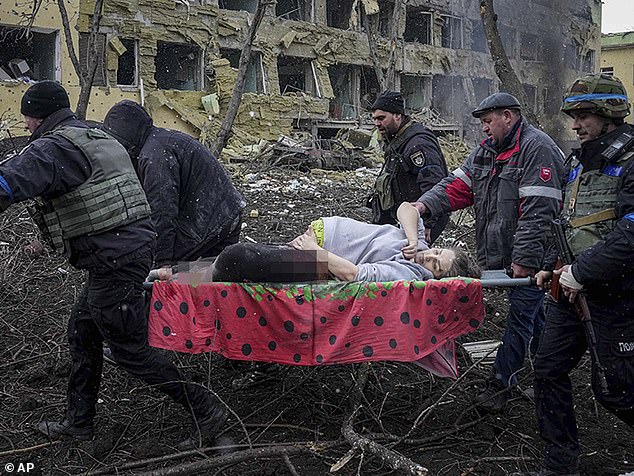 A woman who was giving birth in a Mariupol hospital (pictured) when it was attacked by the Russian military became a symbol of the suffering being faced by the nation’s civilians amid the invasion. It was learned this week that she and her child had died as a result of the strike 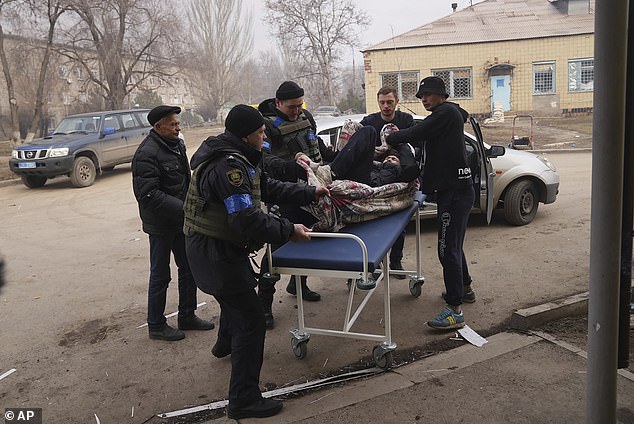 Russian attacks have made the delivery of medical care to Ukrainians for all conditions a challenge due to limited supplies, destroyed facilities and dangerous circumstances. Pictured: An injured man is carried to a hospital in Mariupol

‘Attacks on health care and health workers directly impact people’s ability to access essential health services – especially women, children and other vulnerable groups,’ the WHO wrote in a joint statement with UNICEF and UNFPA.

‘We have already seen that the health care needs of pregnant women, new mothers, younger children and older people inside Ukraine are rising, while access to services is being severely limited by the violence.’

The destructions of hospitals and other medical facilities leave Ukrainians extremely vulnerable to infectious disease and other issues, even once this war eventually ends.

This week, the WHO condemned Russian attacks on Ukrainian health facilities.

‘Today, we call for an immediate cessation of all attacks on health care in Ukraine,’ the organization wrote in the statement.

‘To attack the most vulnerable – babies, children, pregnant women, and those already suffering from illness and disease, and health workers risking their own lives to save lives – is an act of unconscionable cruelty.’

The organization says it is aware of at least 31 attacks on health care services, including 24 examples of facilities being damaged or destroyed and five ambulances being attacked.

Health officials are worried that there will soon be rampant spread of infectious disease in the time following this invasion. 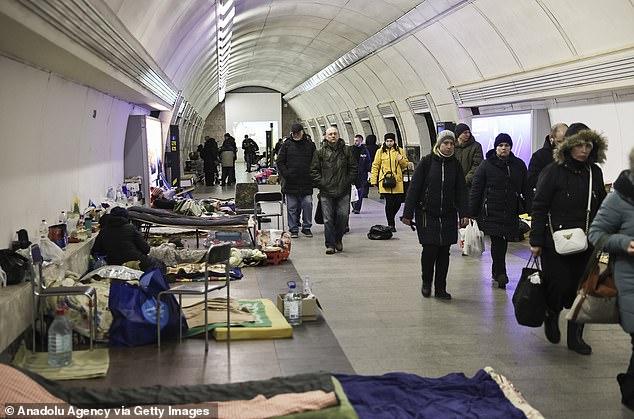 Many civilians have taken refuge in subway tunnels and other underground sites to avoid Russian airstrikes and the combat taking place on the surface. While it is likely to safest place to be at the moment, it is also an area ripe for the spread of infectious diseases like measles and Covid. Pictured: Ukrainian civilians shelter in a Kyiv subway station 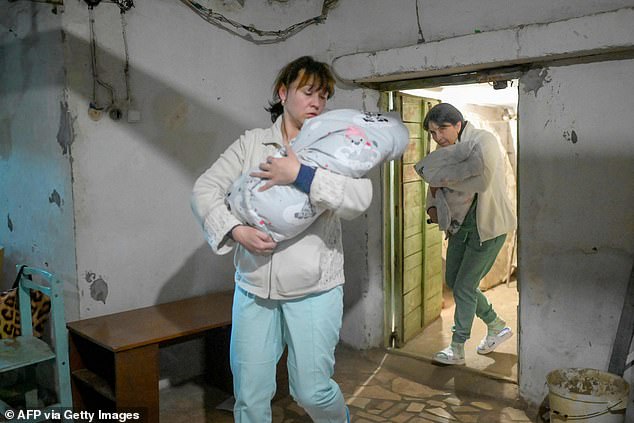 Pictured: Nurses at a Mykolaiv maternity hospital carry newborn children to an underground bunker to protect them from incoming airstrikes

The most timely example is Covid. Ukraine was coming off of the backend of the massive Omicron surge when the Russian invasion began, and most recent data is not available as testing and tracking services have obviously been shut down during the war.

As of last count, only around one-third of the Ukrainian population was fully vaccinated, and it is unlikely that those who are still unvaccinated will have a chance to get the jab anytime soon.

Luckily for the people of Ukraine, the Omicron variant is a more mild strain of the virus, and is less likely to cause more severe infection.

Even a mild sickness combined with poor wartime living conditions and lack of access to food and clean water can turn deadly, though.

Measles proves to be an even larger concern. The European Centre for Disease Prevention and Control (ECDC) warns that Ukraine’s measles vaccination rate of only 82 percent leaves residents at risk of an outbreak. 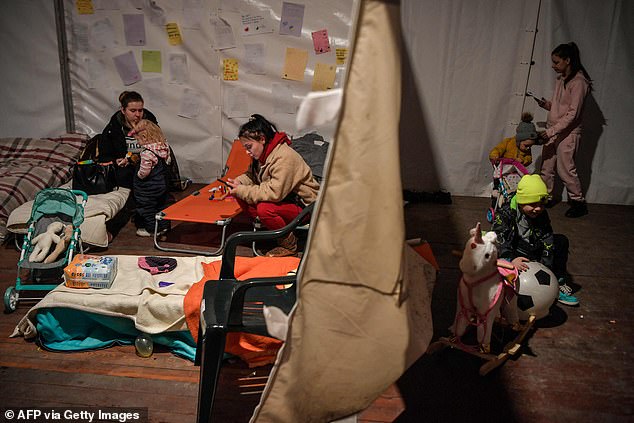 The WHO calls for other nations to offer Ukrainians vaccines and medical care when they arrive as refugees in a new nation. Pictured: Women and children in a humanitarian aid tent located on the Polish border with Ukraine 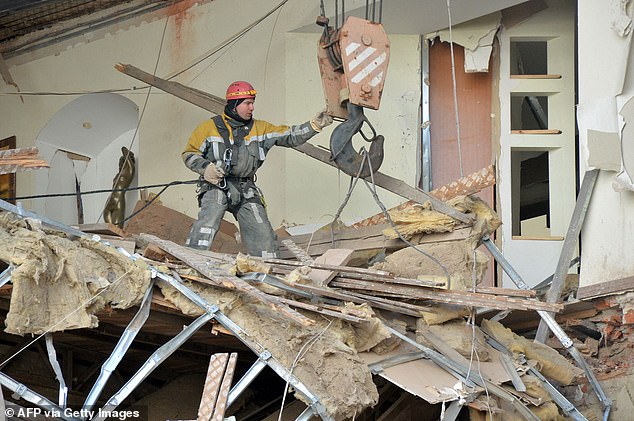 Pictured: Rescue workers in Kharkiv work to remove debris from a building destroyed by a Russian attack

‘Measles is one of the first concerns in any humanitarian crisis,’ James Goodson, a measles specialist at the US Centers for Disease Control and Prevention (CDC) told nature.

The virus is extremely more dangerous than Covid, and spreads through respiratory droplets in the air too.

Scenes of Ukrainians huddled in underground bunkers and subway tunnels in fear of Russian airstrikes became the strongest imagery of the war’s early days.

These close quarters with limited ventilation also create the perfect storm for a virus like measles to spread.

Ukraine dealt with an outbreak of the virus as recent as 2017, when a surge that included over 100,000 cases tore through the nation.

Polio is a concern as well. The virus spread through contaminated water, and a majority of people carrying it will not feel any symptoms.

Only around 80 percent of Ukrainian children are vaccinated against the potentially-devastating virus, though. 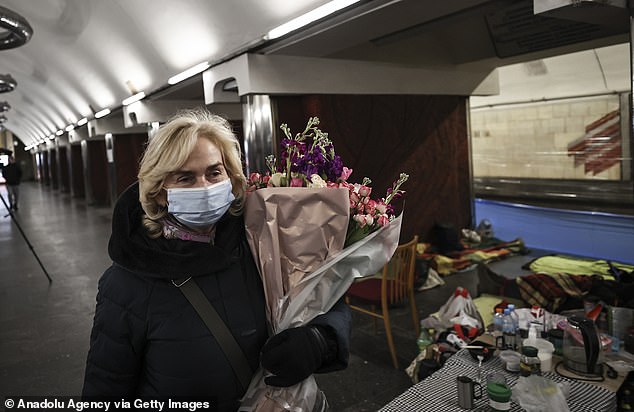 Pictured: A woman shelters in a subway station in Kyiv 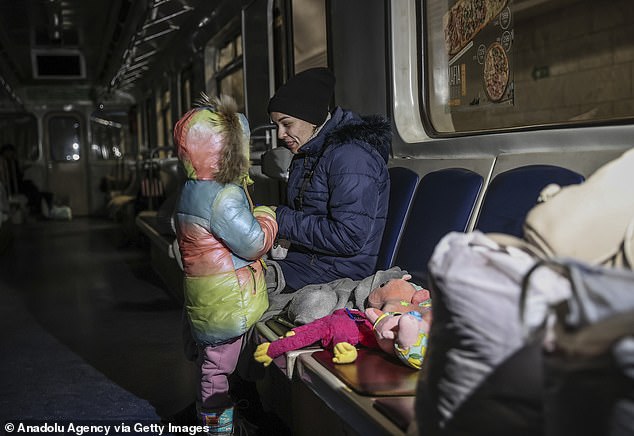 Pictured: A woman speaks to a child on a train in a subway tunnel where they have sheltered in Kyiv

Russian attacks on infrastructure can destroy water treatment and sanitation, leaving the population’s drinking water potentially contaminated with the virus.

‘As people come in, we have to really scale up surveillance in surrounding countries for polio, measles, and also for COVID to make sure we prevent them,’ Heather Papowitz, WHO’s incident manager for Ukraine, said at a new briefing.

‘Looking at providing vaccines for measles, polio and Covid is paramount.’

The nation has recorded a total of 112,000 Covid deaths since the pandemic first began in early 2020. A total of 31 Ukrainians died during the three-year measles outbreak that struck late last decade.

Polio is effectively non-existent in the nation, like it is in the rest of Europe.

People who suffer from chronic diseases like TB or HIV are at extreme risk as well.

Those infected require day-to-day treatment to manage their disease, whether it be drugs or treatment from a medical professional.

Medicine is likely to become few and far between in cities that are ruined by Russian attacks, and many medical professionals can no longer operate without their clinics or supplies.

People who suffer trauma injuries are at an extreme risk as well, as antibiotics and other supplies often used to clean, treat and manage these injuries are no longer available.

A person who is hurt in a war zone may die a preventable death due to lack of available supplies. 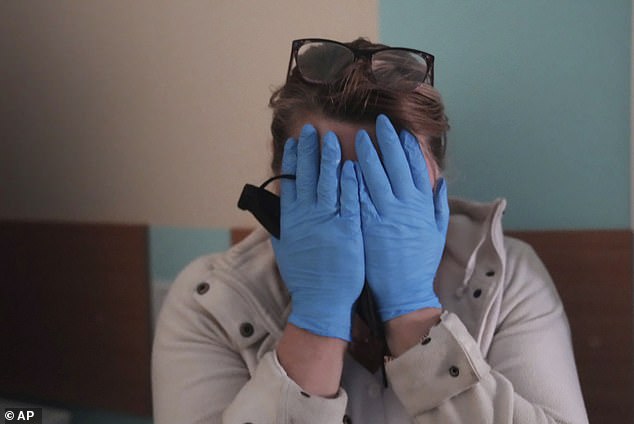 Pictured: A woman at a Mariupol hospital reacts to the situation 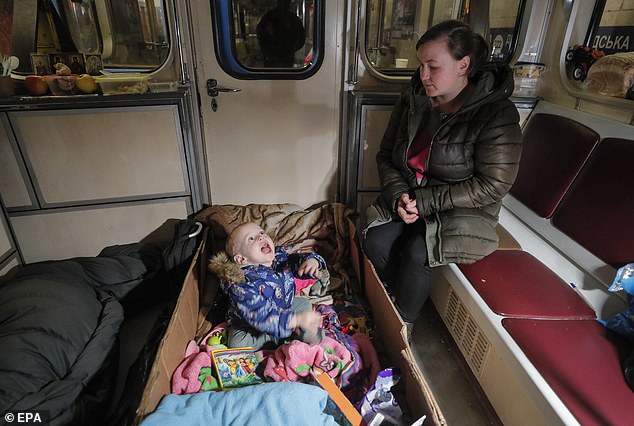 Pictured: A woman and a child sheltered on a subway train underground in Kyiv

The WHO calls on the rest of the world to help Ukrainians fleeing the nation by offering them medical assistance, vaccines and other services when they arrive.

‘Humanitarian partners and health care workers must be able to safely maintain and strengthen essential health service delivery, including immunization against COVID-19 and polio, and the supply of life-saving medicines for civilians across Ukraine as well as to refugees crossing into neighboring countries,’ the statement reads.

‘Health services should be systematically available at border crossings, including rapid care and referral processes for children and pregnant women.’

More than anything, the WHO calls for the end of the war, and for the Russian invasion to have a peaceful ending that allows the people of Ukraine to return to a normal life.

‘Finally, we call for an immediate ceasefire, which includes unhindered access so that people in need can access humanitarian assistance. A peaceful resolution to end the war in Ukraine is possible.’