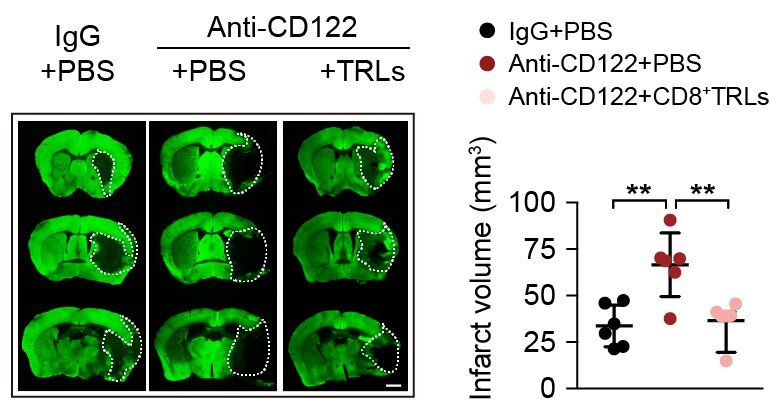 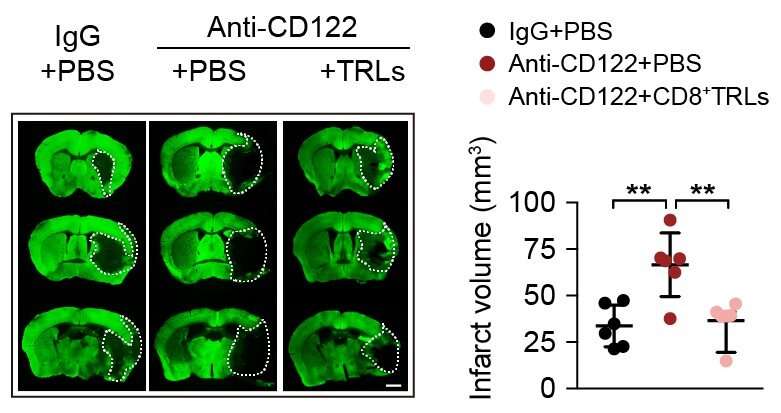 A unique subset of white blood cells confers fast-acting and lasting protection against ischemic stroke in mice, University of Pittsburgh neurologists and immunologists reported in the Journal of Clinical Investigation today.

This study identified a novel subset of CD8+ regulatory-like T cells, or CD8+TRLs, as “first responders” to stroke. Attracted to the site of ischemic injury by a unique “homing” signal released by dying brain cells, CD8+TRLs reach the brain within 24 hours after stroke onset, where they release molecules that provide direct neuroprotective effects, as well as limit inflammation and secondary brain damage.

“The beauty of CD8+TRLs is in their fast response. They confer very potent protection to the brain, which can last a long time,” said co-corresponding author Xiaoming Hu, M.D., Ph.D., associate professor of neurology at Pitt and a U.S. Department of Veterans Affairs (VA) investigator. “Most importantly, these cells are easily accessible because they circulate in the blood before they enter the injured brain.”

“Creating shelf-stable and ready-to-use CD8+TRLs or developing a cocktail of neuroprotective signaling molecules released by those cells once they reach the brain could present effective future therapies against stroke and offer hope to hundreds of thousands of patients who are ineligible for treatments available to them currently,” said co-senior author Jun Chen, M.D., Ph.D., professor of neurology at Pitt and a U.S. Department of VA investigator.

Stroke affects 800,000 Americans yearly, but only a quarter of those patients will be eligible to receive one of only two Food and Drug Administration-approved treatments: An injection of a blood clot-busting enzyme called tPA or mechanical thrombectomy, a surgical procedure that removes the blood clot in the brain with a stent retriever.

Because those treatments must be administered very early after the stroke, many people, especially those living in remote areas, are ineligible for those therapies. The remaining 600,000 people are left with symptoms-based treatments and are at high risk of developing long-term health complications, including mobility challenges and, in some cases, speech and cognitive pathologies. In addition, the blood clot-busting therapy, in particular, has drawbacks that further limit the number of people benefiting from such therapy.

Immune response plays an important role in stroke. As soon as a blood clot wedges itself in a blood vessel, the brain sends an “SOS” signal to activate the immune system. This rapid immune response aims to clear out the cell debris, limit brain damage and kick-start brain repair processes. However, the function of the immune system is diverse and complex, and different types of immune cells may play distinct beneficial or detrimental roles in a damaged brain.

As Chen, Hu, and their colleagues showed for the first time, the CD8+TRLs enter the brain much faster than any other regulatory immune cells. Within 24 hours after researchers depleted these special CD8+TRLs from the bloodstream of stroke mice, the size of the brain region affected by ischemia expanded by 50% compared to animals whose CD8+TRL levels remained intact.

Even more reassuringly, mice who received a transfusion of purified CD8+TRLs prepared in the lab fared better and recovered faster than those who were untreated for over five weeks. These unique CD8+TRLs, therefore, serve as early responders to rally defenses after stroke and may collaborate with other immune cells to safeguard the brain for a long time.