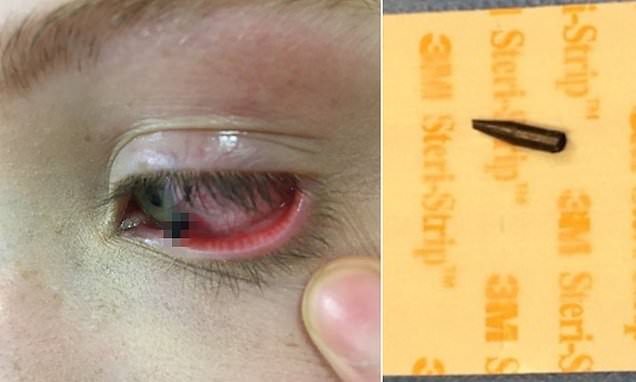 Girl, 13, gets lead stuck in her EYE after a classmate threw a pencil at her as doctors say it was just millimetres away from leaving her blind

A girl got two pieces of lead stuck in her eye after a classmate threw a pencil at her from across the room, doctors reveal.

The 13-year-old, from Manchester, did not notice there was lead sticking out of her eye – it was only pointed out to her by a friend.

She was rushed to hospital where she had emergency surgery to pluck both parts of the lead pencil from her right eye.

One part was just millimetres from her retina – a crucial piece of tissue at the back of the eye that converts light into imagery. Damage to it can cause blindness.

The unnamed girl, who temporarily struggled to look directly at light, has now fully recovered from her ordeal three years ago. She expects to start driving lessons soon.

Writing in the journal BMJ Case Reports, doctors have urged teachers, parents and children to be more aware of dangers of throwing pens and pencils. 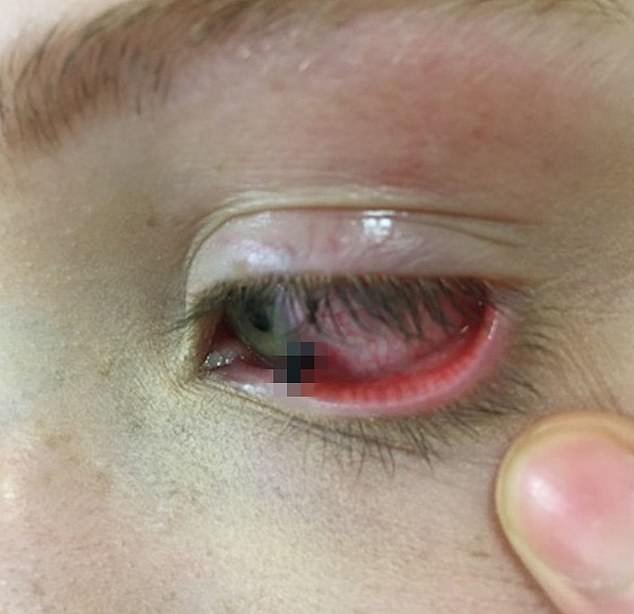 A 13-year-old girl got lead stuck in her eye after a classmate threw a pencil at her from across the room. The larger piece, measuring 6.7mm, was visibly poking out 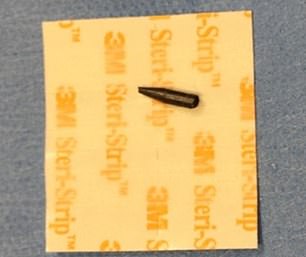 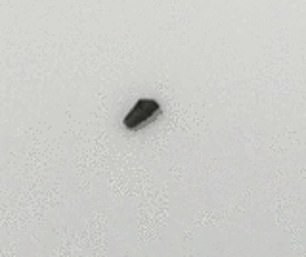 Doctors at Manchester Royal Eye Hospital found there were two pieces of lead stuck in the eye, one measuring 6.7mm (left) and another measuring 1.6mm (right)

At Manchester Royal Eye Hospital, where the girl was treated, around 20 per cent of injuries to the eye from sharp objects result in vision loss or even eye removal.

Lead case author Amreen Qureshi wrote: ‘One in six of ocular perforation injury in children occurs when an object is thrown.

‘If acquired vision loss from trauma in childhood is severe, it may cause life-changing differences to a child’s education and future employment prospects.’

Recalling the day of the incident, the teenager said: ‘At first I had not realised what had happened until my friend said I think you have something in your eye.

‘A pencil had been thrown from the front of the classroom to the back where I had been standing chatting to my friends.

‘A part of the pencil had gone into my eye which must have happened so quickly as I had not really felt anything.

‘I was told the pencil tip was just millimetres away from causing me instant blindness so I know how lucky I was.’

After discovering the lead visibly sticking out of her eye, the girl sought help from teachers and was rushed to hospital with her mother.

Dr Qureshi and colleagues carried out tests, including a routine eye test where she read letters from the board.

Vision in her injured eye had a score of 0.90 on the LogMAR scale – 1.3 is considered blind while 0 is the standard good vision. 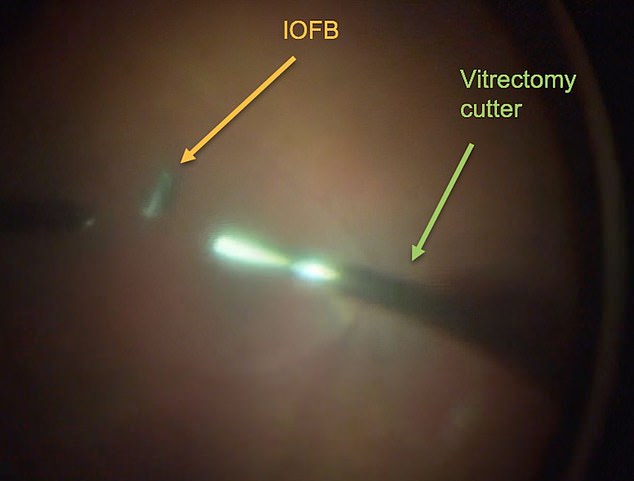 Removing the smaller piece of lead at the back of the eye (IOFB) was more challenging, and they needed to cut away at the tissue surrounding it (vitrectomy cutter)

WHY WAS THE GIRL LUCKY?

The retina is a thin layer of tissue that serves a crucial purpose for vision.

It lines the back of the eye on the inside and is located near the optic nerve.

The retina receives light that the lens has focused and convert the light into neural signals.

Millions of light-sensitive cells, called rods and cones, and other nerve cells are contained in the retina and help to receive and organise visual information coming through the lens.

Signals are sent to the brain via the optic nerve, and the brain figures out what it can see.

Due to the retina’s vital role in vision, damage to it can cause permanent blindness.

Diseases can prevent the retina from receiving or processing light. This prevents the brain from receiving this information, thus leading to blindness.

Retinal diseases share some common signs and symptoms which include:

The former had penetrated the limbus, part of the transparent film over the eye – the cornea. The latter was resting by the retina, a thin layer of tissue of the back of the eye. It had caused some bleeding.

The retina is critical for vision because it receives light and helps convert it to imagery for the brain – via the optic nerve.

Despite this, the doctors implied the girl was lucky. Her lens, which sits behind the iris and helps the eye to focus vision, was still intact and her retina was untouched.

Even a foreign body in the cornea needs to be removed quickly because they can cause prolonged pain and lead to complications such as infection and tissue death in the eye.

The girl said: ‘After a few doctors had looked and discussed what to do I needed to go for an emergency operation.

‘This was the first time I had been through an operation so did not know what to expect.

‘The operation went well and the doctors had safely removed the pencil tip. It must have been a couple of hours.’

In the operation, the lead from her limbus was slowly removed from the eye with forceps while the patient was under general anaesthetic. Getting to the smaller piece at the back of the eye was more challenging for the medics. They needed to cut away at the tissue surrounding it.

All incisions were stitched up, and, after wearing an eye patch for two weeks and using eye drops, the girl had regular check-ups over two months to check the wounds were healing.

She said: ‘After the operation I could not see much out of my left eye at all but gradually my sight seemed to improve.

‘When I first got home I did not like any lights on in my room as it was too bright for me.

‘I had follow up appointments at the hospital… It was very uncomfortable early on as I had to look into a machine with very bright lights so the doctors could look right into the back of my eye.

‘I still have a few stitches in the back of my eye and also at the front but they do not affect me in any way.’

She added: ‘I will be starting driving lessons in the next couple of weeks which I am really looking forward to.’

An estimated 748 pen injuries to the eye and 892 pencil injuries happen every year in the UK, the doctors said.

Aside from injury to the eye from the initial trauma, pencil contains carbon which is thought to remain in the eye, which can cause lasting inflammation.