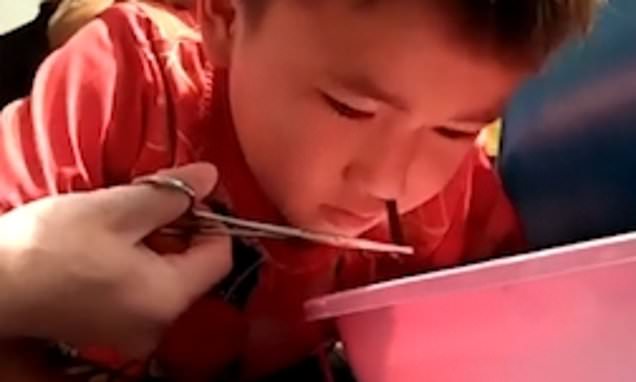 Footage has captured the gruesome moment a live leech is pulled out of a seven-year-old boy’s nose.

The unnamed boy had been playing in a muddy canal in Xaignabouli, northwest Laos, when he felt something get stuck in his left nostril.

After complaining to his mother of being in pain, the boy went to bed in the hope it would be better the next day. 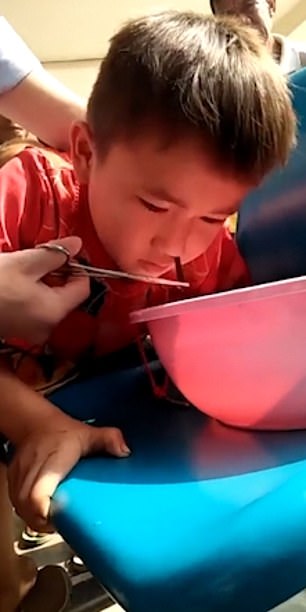 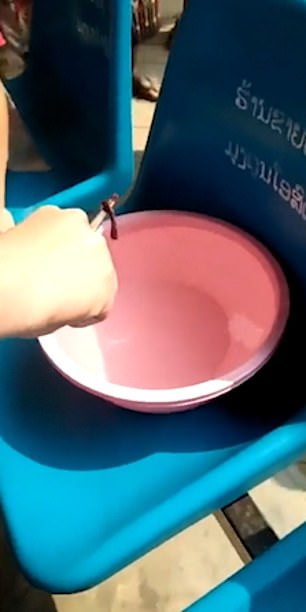 Footage has captured the gruesome moment a live leech is pulled out of an unnamed seven-year-old boy’s nose (seen left). The 4cm-long leech was removed with tweezers, which it then proceeded to wrap around (seen right). It grew in size after feeding on the boy’s blood

But when he endured breathing difficulties and discomfort throughout the night, his mother took him to their local hospital.

Footage shows him sitting calmly while a nurse called Laya Keomany pulled the 4cm worm-like creature out with tweezers.

Doctors warned the leech swelled after sucking on the boy’s blood while he slept.

They discovered the leech in the boy’s nose shortly after he arrived at hospital on February 27.

He sat – not speaking or moving – with his head over a bowl, while excited spectators awaited the leech’s arrival.

The worm-like creature was pulled out without any hesitation and then proceeded to wrap around the tweezers.

Spectators can be heard squealing in the background in a combination of excitement and disgust.

The leech is believed to have been smaller when it entered the boy’s nose and then grew as it fed on his blood.

His mother – who has also not been named – told Newsflare: ‘I remembered the canal was brownish because of the mud.

‘From now on, I will tell my boy and every kid around there not to play in the water.’

Mr Keomany added: ‘When we shone a torch in the nostril it was clear something was blocking the airway.’

The boy is said to be doing well following the incident.

COCKROACH WAS STUCK IN A WOMAN’S EAR FOR A WEEK

A woman had a cockroach stuck in her ear for more than a week after the insect crawled in while she slept.

Katie Holley, 29, of Florida, woke startled to find what felt like a piece of ice lodged in her left ear, only to discover two bug legs sticking out.

After her husband was only able to remove a few legs with tweezers, Mrs Holley rushed to A&E while the cockroach continue to wriggle deeper into her ear canal.

Doctors thought they had removed the roach until – nine days later – Mrs Holley continued to experience pain and a loss of hearing in her ear, leading to a local medic removing six more piece of the insect’s carcass.

‘He told me he extracted bugs from peoples’ ears at least once a month – and I was the second person that day who needed it,’ Mrs Holley said.

Cockroaches are thought to crawl into people’s ears in search of food.