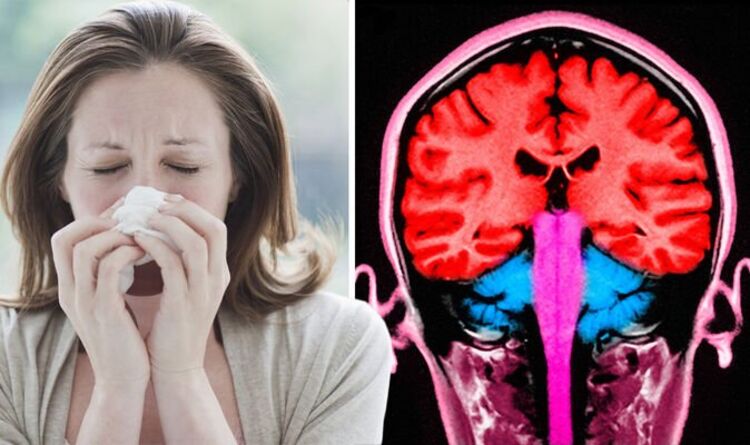 Doctor Hilary on the difference between covid and hay fever

Hay fever, described by many as a nuisance, afflicts one in four people in the UK annually. It has previously been shown that these people are more likely to suffer from other allergy-driven conditions, such as asthma, eczema and food allergy. But separate research suggests they may also be at greater risk of psychiatric disorders.

A 2018 body of research published in the journal of Brain Behaviour and Immunity, found that people with allergy-related conditions were more likely to suffer from a psychiatric disorder.

Findings suggested asthma, allergic rhinitis (hay fever), and atopic dermatitis (eczema), referred to as the three As – could be linked to a greater risk of psychiatric disorders.

There appeared to be an elevated incidence of depression, schizophrenia, and anxiety among people with eczema.

Other allergies such as asthma and hay fever, however, were associated with schizophrenia, depression and bipolar.

The research, which looked at a cohort of more than 46,000 people, found that 10.8 percent of people with allergic diseases developed a psychiatric disorder over a 15-year period.

The study was launched after its lead author noticed patients of his who suffered from one of the three A’s also showed signs of emotional unease.

Doctor Nian-Sheng Tzeng, said: “As a clinician, I observed that some patients with the three A’s appeared to suffer emotionally – which plays a role in both common allergies and psychiatric disorders.

“We would like to let clinicians who care for patients with the allergic disease know that their risk for psychiatric diseases may be higher.

Researchers suggested at the time that the connection could be put down to inflammation caused by allergies.

Hay fever, for example, which is also known as seasonal allergic rhinitis, is an allergy-related inflammation of the nasal passages, throat and eye membrane.

Previous research has noted a higher incidence of inflammation among patients with anxiety and depression.

While the findings found a correlation, they were unable to provide any evidence of a causal relationship between the conditions.

The researchers wrote: “Observationally, we found strong evidence of a relationship between allergic disease and mental health traits, where having any one of asthma, eczema and hay fever increased the risk for depression, bipolar disorder and neuroticism.

“However, the associations for the causal relationship were much weaker and noble to replicate that which was found in the observational analysis.

“This suggests that the observational relationships found were inflated likely due to confounding or some other form of bias.”

The correlation was confirmed by a 2021 study last year which drew on data from the UK Biobank, but this time the findings implied that allergies were unlikely to cause mental health conditions or vice versa.

“Establishing whether allergic disease causes mental health problems, or vice versa is important to ensure that resources and treatment strategies are targeted appropriately.”

The findings of the study were published in the journal of Clinical and Experimental Allergy.