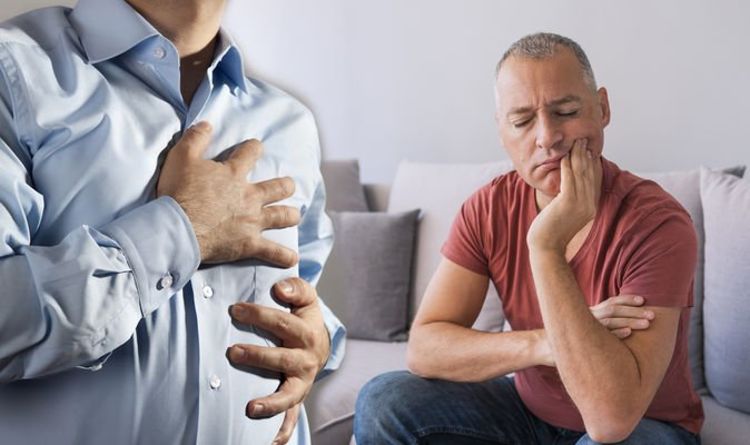 A heart attack occurs when blood flow to the heart is significantly or completely halted — usually by a blood clot that forms after plaque in a coronary artery ruptures. Symptoms can differ between men and women and often present themselves as pain felt on body parts.

Chest pain is what most know to be the main pain symptom warning of a heart attack.

The sensation has been described as a pressure, tightness or squeezing in the centre of the chest.

According to the NHS, other body parts suffering with pain and indicating you may be experiencing the medical emergency include the arms (usually the left arm is affected), the jaw, neck, back or abdomen.

“In some cases, there may not be any chest pain at all, especially in women, older people, and people who have diabetes.

“It’s the overall pattern of symptoms that helps to determine whether you are having a heart attack.”

Feeling lightheaded or dizzy, sweating, shortness of breath, feeling sick or an overwhelming sense of anxiety similar to a panic attack could also be symptoms of a heart attack.

Heart attack symptoms are different for woman and can include:

Fatigue, which may appear for several days prior to other symptoms and create the impression you have the flu rather than a heart attack

Upper back pain that may feel like burning, tingling, or pressure

Pain, tingling, or discomfort in either or both arms

Shortness of breath, with or without chest pain that can come on suddenly.

The symptoms of heart attack are characteristically intrusive and sudden, with signs rarely presenting before an incident.

Regina Giblin, a senior cardiac nurse at the British Heart Foundation, explained that symptoms women experience during a heart attack may be different to those men experience.

She added: “The most common symptoms, for both men and women, are sudden central chest pain or discomfort in the chest that doesn’t go away, which can feel like pressure, tightness or squeezing.

“There may be pain that radiates from the left arm, or both arms, or the neck, jaw, or stomach.

“Women can feel sick, light-headed or have shortness of breath or a sense of impending doom.”

“If you think you or someone else is having a heart attack you must dial 999 immediately, the BHF and NHS warn.

The organisations add that you do not need to be completely sure whether your symptoms are a heart attack, but you should still seek medical attention regardless as quickly as possible.

“If you’re with someone who’s experiencing heart attack symptoms but they’re putting off or refusing to call an ambulance, it’s really important that you call one for them,” the BHF says.

It’s important to recognise the symptoms of a heart attack, take them seriously and act quickly to prevent damaging the heart muscle.
Source: Read Full Article

In the pursuit of...