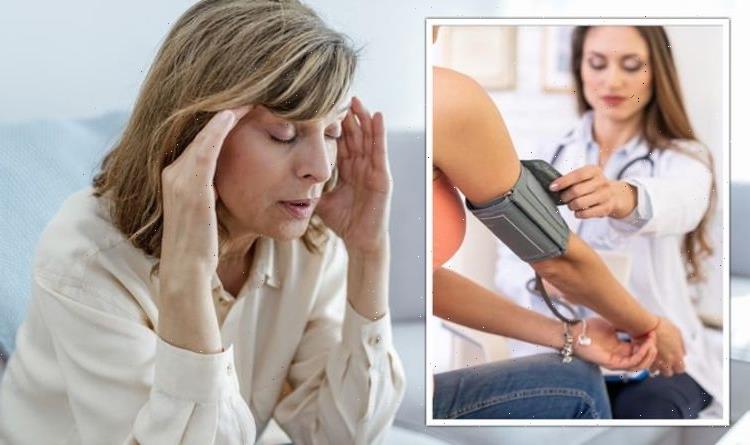 High blood pressure is deemed one of the most important controllable risk factors for cardiovascular disease, making it crucial to lower high blood readings. The condition has been dubbed the “silent killer” because symptoms typically appear once life-threatening conditions are already in full swing. Studies have suggested that migraines could foreshadow high blood pressure after menopause, making them an important precursor for the prevention of ailments.

A study published in Neurology, set out to determine if women who had migraines were more likely to develop hypertension after menopause.

For the study, researchers looked at 56,202 postmenopausal French women who had partaken in the project that provided data for studies of lifestyle and disease.

Blood pressure levels were checked at the outset of the study, and none of the women were found to be hypertensive.

Over the course of the study, participants were asked whether they developed migraines or headaches.

READ MORE: High cholesterol symptoms: The uncommon signs in your eyes that your levels are too high

After accounting for other lifestyle factors, the researchers concluded that high blood pressure was more common in women who had migraines than in those who did not.

Study author Gianluca Severi, of the French National Institute of Health and Medicine Research in Paris, said: “Migraine is a debilitating disorder, often resulting in multiple severe headaches a month, and typically experienced more often by women than men.

“[It] is most prevalent in women in the years before menopause. After menopause, fewer women experience migraines, however this is when the prevalence of high blood pressure in women increases.”

Menopause is a natural part of the ageing process which marks the stage in a woman’s life when she stops having her period.

A sudden fluctuation in hormones around this stage triggers a host of changes in the female body, with a large number of women experiencing emotional upheavals.

It is believed high blood pressure causes a substantial amount of pressure in the arteries, which puts stress on the body and triggers a migraine attack.

Doctor Severi explained: “Migraine is a risk factor for cardiovascular disease. Therefore, we wanted to determine if a history of migraine is linked to an increased risk of blood pressure.

“There are multiple ways in which migraines may be linked to high blood pressure. People with migraine have been shown to have early signs of arterial stiffness.

“Stiffer, smaller vessels are not as capable of accommodating blood flow, resulting in pressure increase. It is also possible that associations could be due to genetics.

“Since previous research shows migraine increases the likelihood of cardiovascular events, identification of additional risk factors such as the higher likelihood of blood pressure among people with migraine could aid in individualised treatment or prevention.”

Previous studies have also found that oestrogen could help maintain lower levels of blood pressure by allowing the blood vessels to widen so blood can flow through more easily.

According to Blood Pressure UK (BPUK), 26 percent of women in England have high blood pressure compared with 31 percent of men.

Graham MacGregor, a professor of cardiovascular medicine, and chairman of BPUK, said earlier this year that “women are often forgotten about” when it comes to concerns over blood pressure.

Researchers earlier this year urged women to monitor their blood pressure in their forties after a study suggested hypertension could double their risk of a heart attack.

A prior study had also suggested that blood pressure begins to increase at younger ages in women than in men, then goes up at a faster rate.