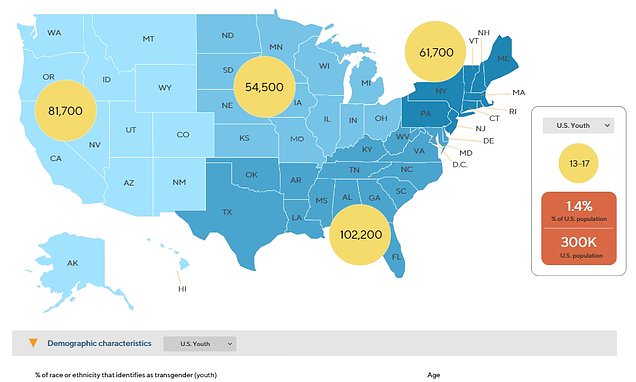 How gender dysphoria rates among children have DOUBLED since 2017 – with 300,000 teens now identifying as trans

The number of children with gender dysphoria has exploded in recent years, giving rise to the use of powerful puberty-blocking drugs.

That is double the number estimated to be transgender in 2017 in a previous report by the same researchers, though they used different estimates.

Some say the rise is born out of increased awareness of gender dysphoria — that is, emotional distress due to a disconnect between gender identity and biological sex — and a rise in acceptance in society.

However, many believe that the impressionable minds of children are easily swayed by ‘trends’ and ‘phases’ among peers and that children are not ready to make irreversible decisions about their gender.

So far, four states — Alabama, Arkansas, Texas, and Arizona — have brought in bans to restrict access to gender-affirming care including hormonal treatment and surgery. Oklahoma signaled its intent to follow suit Tuesday after threatening to cut a hospital’s funding if it prescribes puberty blockers or hormone therapy. 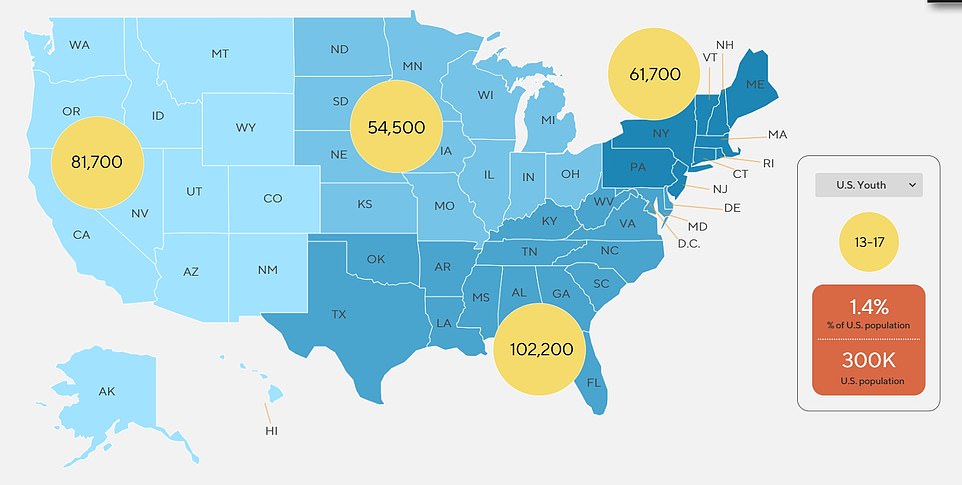 The above map shows the population of transgenderadults and children across America in 2020, according to the Williams Institute at the University of California, Los Angeles. Its estimate for children aged 13 to 17 has doubled since 2017. It shows the highest population is in southern states, followed by those along the east coast 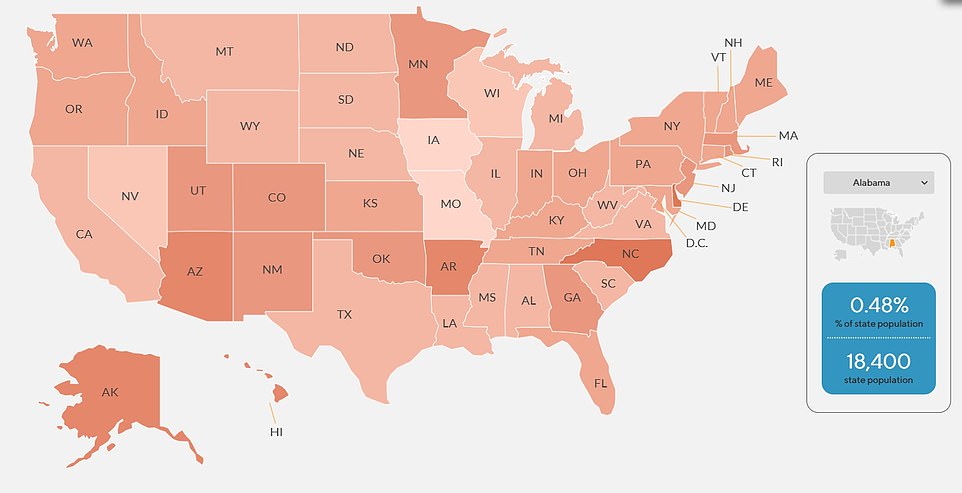 This map shows the proportion of the population identifying as transgender by state. Those with the darkest color have almost one per cent of their population in this category 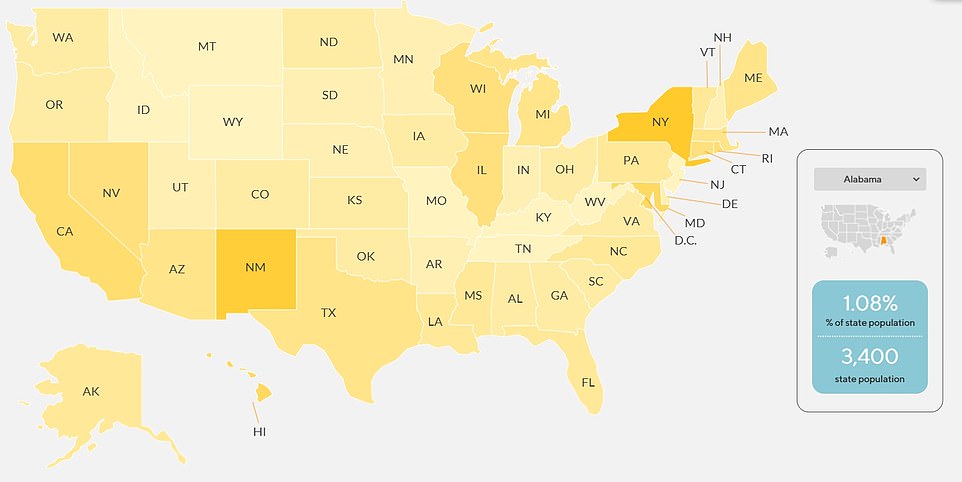 This map shows the proportion of children aged between 13 and 17 years old that identified as transgender by state. The darker colors indicate a higher proportion of youngesters. In New York and New Mexico, it is as high as three per cent

This shows the number of people in each age category estimated to identify as transgender, and the number of adults (1.3million) compared to children (300,000) 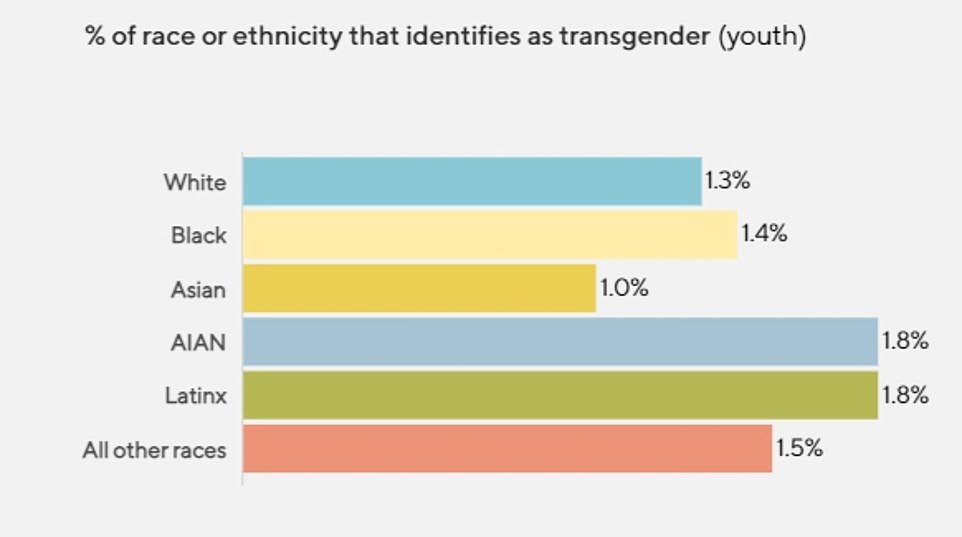 The above shows which ethnicity transgender people under 18 years old identify as. Those who are Latinx or American Indian/ Alaskan Native (AIAN) were most likely to say they were transgender 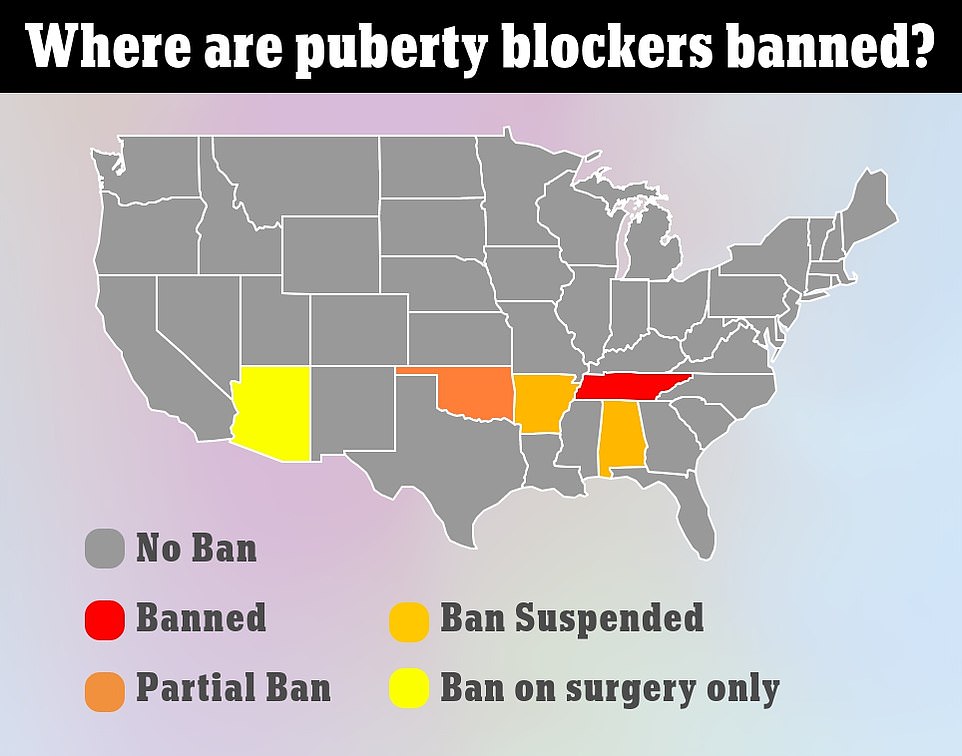 Shown above are the states with a ban on puberty blockers (red), a partial ban (dark orange), a suspended ban due to legal proceedings (orange) and a ban on surgery only (yellow).

Puberty blockers are sold as a ‘pause button’ on puberty, offering a child the breathing space to reach a considered decision over whether to transition using hormone therapy or surgery.

They work by halting the production of sex hormones — like testosterone or estrogen — which trigger the physical changes that occur during puberty, such as a deeper voice in men and starting the menstraul cycle in women.

They are approved for use in pre-pubescent teens, and can be given on prescription to children as young as eight or nine years old. Girls tend to start puberty when they are about 11 years old, while boys start around the age of 12.

The medication is given as an injection every one, three or six months. It can also be administered via an implant under the skin which lasts for up to a year.

Puberty will start if a patient is taken off the pills.

Oklahoma Governor Kevin Stitt has signed a bill that effectively bans gender- reassignment drugs from being prescribed to minors at the state’s main children’s hospital.

The Republican is withholding Covid relief funds from Oklahoma Children’s Hospital at OU Health until it stops providing puberty blockers and hormone therapy to under-18s.

The state allocated $108 million to the University of Oklahoma-linked health system as part of the federal American Rescue Plan Act passed in 2021 to help struggling businesses and hospitals.

Gov. Stitt said Tuesday: ‘By signing this bill today we are taking the first step to protect children from permanent gender transition surgeries and therapies.

‘It is wildly inappropriate for taxpayer dollars to be used for condoning, promoting, or performing these types of controversial procedures on healthy children.’

Oklahoma Children’s Hospital currently offers life-altering drugs to teenagers under 18 with parental approval. It is thought that around 100 minors are currently receiving treatment.

Stitt also called for the Republican-controlled state Legislature to ban some of those gender-affirming treatments statewide when it returns in February.

He said in a statement that he wanted a prohibition on ‘all irreversible gender transition surgeries and hormone therapies’ on minors.

Hormone therapy on the other hand is used to trigger secondary sexual characteristics in a patient to make their body better match their gender identity.

They work by boosting levels of either testosterone or estrogen while suppressing the other to bring about the physical changes.

If started before puberty, doctors say they can help patients avoid secondary sexual characteristics that do not match their gender.

The treatment is normally begun at about 16 years old, the Mayo Clinic says, but other hospitals may offer it at an earlier age.

It can be given via injections, pills or using a cream that is rubbed onto the skin.

For patients undergoing feminizing hormone therapy, they begin with daily doses of spironolactone — sold under the brand name Aldactone — to suppress the male sex hormone testosterone.

Doctors say the treatment will trigger a loss of muscle mass, decreased hair growth, breast development and redistribution of body fat — among other changes — three to six months later.

Gender-affirming surgeries available to older adolescents and adults are non-reversible, and can include top surgery to create male or female chests, bottom surgery on genitals, and even facial feminization surgeries.

In February, Texas Gov. Greg Abbott directed state agencies to begin investigating parents who allow their children to receive gender-affirming care, classifying that as a form of child abuse.

Abbott wrote a letter to the state’s Department of Family and Protective Services in which he said that state law imposes reporting requirements “upon all licensed professionals who have direct contact with children who may be subject to such abuse.”

Doctors, nurses, and teachers could be subject to criminal penalties if they fail to report on such incidents.

A bill in Missouri would attempt classify gender-affirming care as child abuse, not dissimilar to the order recently issued in Texas.

The Williams Institute found this year that its estimate of the number of youth who identify as transgender has doubled from its previous estimate in 2017.

Children age 13 to 17 make up around 18 per cent of the transgender population in the US, meaning nearly one in five people who identify as transgender fall into that age group.

Since 2005, the number of youth referred to gender clinics has increased as much as tenfold in the US, said a review in the British Psych Bulletin this year.

A study from Yale University examined the use of puberty blockers implants in people going through precocious or early puberty, when puberty begins before age eight in girls and age nine in boys.

In trans adolescents, they were only used in 62 cases at an average of 14 years old.

The researchers said this suggests that the age-based argument that trans adolescents are too young to access puberty blockers does not appear to apply to those experiencing puberty early.

The same study found that between 2004 and 2016, the annual number of puberty-blocking implants given out to transgender patients increased from 0 to 63.

The average age of the recipient was 14 years old.