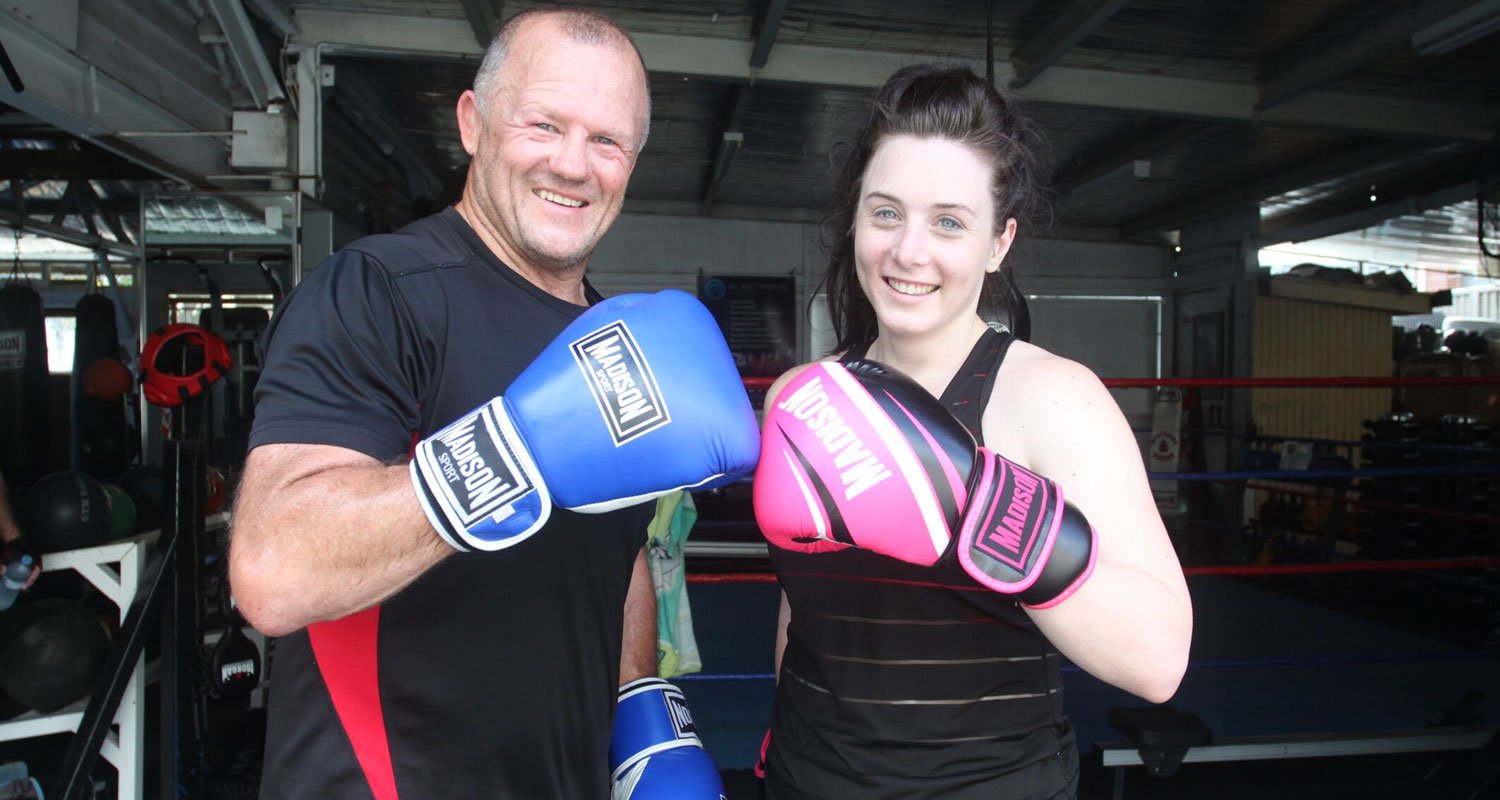 It’s fair to say the Disney-obsessed, mid-twenties woman wearing a shirt to the gym that reads ‘Working my Puff into Tuff’ (yes, that’s a Pokémon reference) doesn’t quite fit the mould of a stereotypical boxer.

Well, that’s me in a nutshell. So how did this pink Jigglypuff come to find herself in the ring?

As a justification of my chocolate addiction, I partake in boot camps regularly. Trevor ‘The Axe’ Gillmeister – NRL legend and defensive coach for the QLD Maroons – hosts the sessions I attend and asked if I’d be willing to compete in amateur fight-night with him as my coach. Without hesitation, I agreed, mentally scribbling it onto my bucket list. I’d never boxed in my life but felt pretty good in my ability to hit a punching bag. Hell, I’d been taking boxercise classes like they were going out of fashion. What more could there be?

With only six weeks until the fight, Gilly (as we call him) was keen to get me in the ring straight away. Warming up for our first training session I noticed a subtle difference in the playlist. ACDC was now accompanied by the likes of Adele and Katy Perry. Gilly had also sorted out all the equipment I’d need, ensuring nothing but the best…and nothing but pink!

When people think of ‘The Axe’ they remember the guy who pulled a drip from his arm and left hospital risking his life to take Queensland to victory in the 1995 State of Origin. Well, the version that will be forever etched in my mind is the man who got me boxing gloves in my favourite colour and let me work out to Katy Perry’s ‘Hot and Cold’.

That’s about where the sentimentality ends though.

The training was brutal, and Gilly is a no excuses kind of guy. I was training at least an hour a day, sometimes two. My first sparring session was to be with my opponent, after just one coaching session with Gilly. We were introduced and after watching her ‘warm up’ I knew I was in a bit of trouble. Two minutes is an eternity in the ring. Three rounds is hell. And fighting this woman was way more than I’d bargained for. She was taking it easy but even so was landing hit after hit on me.

It was the first time I’d ever been hit in the face. It’s more of a shock than anything. You’re totally taken aback and your eyes well up, hindering your vision. Hint: If you’re thinking of boxing, DON’T wear mascara! At the end of the three rounds, I was a bit worse for wear. My nose was bleeding, my body drenched in sweat, and my arms were noodles. I watched my opponent as she effortlessly continued her workout, not even breaking a sweat. This was the first time I seriously contemplated what I’d signed myself up for. Gilly said I’d be fighting an amateur but this woman had been sparring for months. Even he looked scared for me after witnessing my piss poor performance.

Re-evaluating my priorities, I mentally moved the goal post from ‘win’ to ‘remain standing’. Thankfully though, during the next training session, Gilly advised I’d been assigned a different opponent, someone closer to my level. Completely relieved, I felt reinvigorated to take this on and (hopefully) come home with a win.

Gilly and I sparred regularly and were joined by Channel Seven Sports Journalist Chris Garry, who had a history of competitive kickboxing. While Gilly focused his attention on perfecting my technique, he seemed to struggle with the idea of actually hitting me. This is where Chris and another co-worker took the helm because they didn’t mind throwing a few good punches my way. It was obvious they were holding back, but it was enough to teach me to take a hit and remain composed; something I was previously lacking.

Training for this fight had completely consumed me. My body was bruised, my immune system was down, and I was starting to look slightly anaemic. But by the same token, I was becoming fitter, faster, and stronger.

The big day finally arrived and secretly, I felt confident. I’d spent the last six weeks fighting grown men. In one killer training session, I had even lasted 14 rounds of two minutes. Surely fighting a woman and winning was now achievable? As I stepped into the ring, I felt my stomach churn with nerves as I became aware of the 400 eyes fixated on my every move. We tapped gloves and she went straight for the attack. As planned I worked on my defence for the first round, holding my ground and countering where I could. When we entered the second round, I had plenty left in the tank and felt a wave of confidence wash over me. Because of my opponent’s height, she threw mostly body shots, leaving her head unguarded for me to strike again and again. Her exhaustion started to show and while I could see more opportunities to attack… something was holding me back. I just couldn’t bring myself to hit her as hard as I would hit a punching bag.

I felt good coming into the final round; I still hadn’t been hit in the face – perhaps I wouldn’t be! Or perhaps I shouldn’t count my chickens before they hatch. My opponent found one last bout of energy and I let my guard down. From the sidelines, her coach erupted, “haymaker! Haymaker! HAYMAKER!” and with every bit of energy, my opponent delivered. Though she was small, she was fast. She must have landed at least four solid hits, one after the other. As much as it hurt, I told myself not to let it show… she’d get points for that. Finally, with nothing left in either of us, it was over. I was still standing, I wasn’t bleeding, and my nose was fine! Whatever the outcome, I was happy with my performance. We met again in the centre of the ring as the winner was announced.

Not that I needed much convincing, but Gilly had told me right back at the start that this would be a life-changing experience. And unbearable as it was at times, having come out the other end, I can only agree.