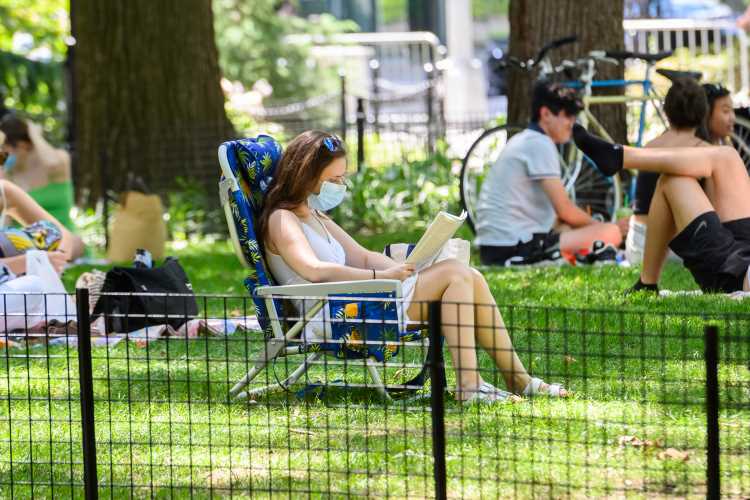 Nationwide use of face masks could significantly slow the spread of COVID-19 and end the epidemic in four to six weeks, Dr. Robert Redfield, Director of the Centers for Disease Control, said Monday.

Speaking at a press conference in Mecklenburg County, North Carolina, which encompasses Charlotte, where COVID-19 cases and hospitalizations are on the rise, Redfield urged people to wear masks.

“If all of us would put on a face covering now for the next four weeks, six weeks, we could drive this epidemic to the ground,” he said.

North Carolina is one of the nearly two dozen states, along with the District of Columbia, that requires its citizens to wear masks in public. Redfield emphasized that wearing masks is scientifically proven to make a difference in reducing the spread of COVID-19.

Though the CDC first recommended that Americans start wearing face masks to reduce the spread of COVID-19 on April 3, the Trump administration has refrained from requiring all Americans to wear masks, instead leaving the decision up to individual states.

While the majority of Americans say they are wearing masks in public, others have refused, falsely claiming that it goes against their rights or is dangerous to their health.

President Donald Trump himself has also resisted wearing a mask in public for months, and even mocked Joe Biden for wearing one in May. But as COVID-19 cases began to soar in most of the U.S. following Memorial Day weekend, critics called on Trump to start wearing them as an example to Americans. He wore one publicly for the first time on July 11, during a visit to Walter Reed National Medical Center.

In the months since the CDC’s recommendation, several studies have confirmed that masks are effective in stopping the spread of COVID-19. The virus primarily spreads through respiratory droplets from the nose and mouth and when people are pre-symptomatic or asymptomatic, and often unaware that they have COVID-19. By wearing masks, the risk of virus transmission goes down by 85 percent, according to a study published in the journal Lancet.

Another study, from Florida Atlantic University, determined that multi-layer, sewn face masks, like those available on Etsy or from many clothing retailers, were the most effective non-medical masks, and reduced respiratory spray from 8 feet to just 2.5 inches.