Monkeypox is the latest global public health threat to make headlines. Most people who contract the monkeypox virus experience flu-like symptoms and a blistery rash that lasts two to four weeks, but a small percentage of infected people develop sepsis or other severe and potentially fatal complications.

It is not uncommon for there to be small outbreaks of monkeypox in Central and West Africa, but in the last few weeks, dozens of countries from other world regions have reported thousands of cases of monkeypox.

As an infectious disease epidemiologist, I’ve received many inquiries from colleagues and friends about whether a monkeypox pandemic will be the next big disruption to our lives. A disease is considered to be pandemic when two separate conditions are met: cases are occurring globally and the number of cases being diagnosed is large enough to qualify as epidemic. An epidemic is characterized by new cases of a disease occurring at a higher than typical rate in at least several communities.

While the monkeypox situation is certainly newsworthy, as of mid-July 2022, it did not clearly meet both of the requirements for pandemic status. More importantly, the current evidence suggests that monkeypox is very unlikely to become a global health catastrophe even if the virus spreads and becomes pandemic.

Both the 2009 H1N1 influenza virus and the SARS-CoV-2 coronavirus that emerged in 2019 quickly spread to every region of the world. Global health experts were in full agreement that those were pandemic events. By contrast, the Ebola virus epidemic in West Africa from 2014 to 2016 was mostly contained to just that one region of the world and never spread globally.

The current distribution of monkeypox cases is somewhere between those two scenarios. As of mid-July 2022, about 9,200 total cases of monkeypox had been reported by 63 countries. For reasons that are not yet fully understood, almost all of those cases happened in Europe and the Americas, and only a few cases were reported by African, Asian and Middle Eastern countries.

Is that distribution sufficiently global to meet the definition of a pandemic? Maybe.

Is monkeypox an epidemic?

The next condition to meet the pandemic threshold is whether places where monkeypox is present are experiencing epidemics.

Europe and the Americas typically have zero cases of monkeypox per year, so the current case counts in these regions are much higher than normal. 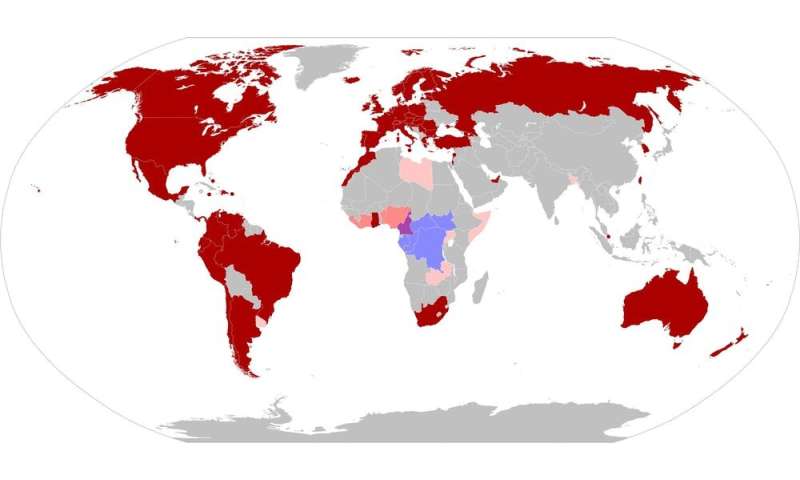 But it is also important to look at how much community transmission is happening. If hundreds of people get sick after attending a single event—like a concert or festival—that would typically be classified as an outbreak. The situation would only become an epidemic if infections started occurring among many people who were not close contacts of event attendees. Once widespread and sustained community transmission begins occurring, it is much harder to control a virus.

Most of the people diagnosed with monkeypox in May and June 2022 were 20- to 50-year-old men who identify as members of the LGBT+ community. In July 2022, cases were not yet occurring at significant levels in multiple age and sociodemographic groups.

Is the current pattern of spread sufficient to classify monkeypox as an epidemic rather than an outbreak? Maybe, but only in some of the countries that have reported monkeypox cases this year.

Since the answers to whether monkeypox is global and an epidemic are both “maybe” rather than “yes,” this suggests that monkeypox is not a pandemic—at least not yet. But it could become one soon.

How worried should you be about monkeypox?

Pathogens like monkeypox are usually spread through touch and other types of close contact with an infected person. Epidemiologists worry much less about pathogens with “person-to-person” transmission than they do about respiratory viruses like influenza and the coronavirus that can spread easily through the air.

Over the course of just a few months, COVID-19 transitioned from a local concern in Wuhan, China, into the worst pandemic in a century. That is not going to happen with monkeypox.

Why? First, the monkeypox virus is much less contagious than the circulating strains of coronavirus. Second, monkeypox is less deadly than COVID-19. The case fatality rate during the current international outbreak is less than one death for every 1,000 adult cases, which is lower than the percentage of unvaccinated people who die after getting COVID-19. And, third, existing vaccines will be able to help slow the spread of monkeypox in high-risk populations if problems with limited supplies can be resolved.

The World Health Organization follows a set of rules called the International Health Regulations that guide global public health responses to emerging threats. Under these regulations, the WHO has the authority to declare a “public health emergency of international concern”—commonly shortened to the acronym PHEIC—when an infectious disease is spreading internationally and might “potentially require a coordinated international response.” The goal is to detect and respond to potential global health crises and prevent them from becoming pandemics.

An expert panel convened by the World Health Organization on June 23 determined that monkeypox was a “multi-country outbreak” but did not meet the criteria to be a public health emergency of international concern. The panel will meet again on July 21 to examine the distribution and frequency of new case reports. If the rate of new cases continues to increase and there is evidence of transmission within more diverse populations, monkeypox may be declared a public health emergency.