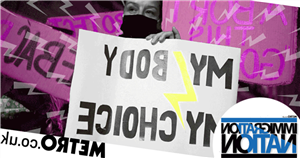 The first time I got a positive pregnancy test, I broke down in tears and started shaking.

I was 22 and I knew that I wasn’t ready for a child so I wanted to have an abortion – the problem was, I lived in Poland at the time and this wasn’t allowed.

Thankfully, by the second time I needed an abortion 13 years after the first one, I was living in England so it was a very different experience.

That’s why I’m sharing my story – to try to change abortion laws in my home country after it put into place a near-total ban on foetal terminations last year.

I grew up in a town called Losice in Poland, where contraception and sex education were very limited.

When I was younger, I heard about the issue of abortion on TV and I knew that Polish women lived in fear of an unwanted pregnancy, as well as suffered enormous guilt and stigma when speaking out or even considering a termination.

I lived that fear too. I promised myself that I would always be very careful. This is why my first pregnancy was terrifying.

I had just finished studying nursing and I started working in Warsaw as a nurse on a probation period (with no permanent contract). I also had to take on an extra job as a cleaner to be able to pay for university, as I had just started my masters degree.

I was in a relationship with my now ex-husband, who was studying and did not have a permanent job. We rented a tiny studio flat and occasionally, he received financial help from his parents – unfortunately I was not so lucky.

I was on a contraceptive pill, which worked very well until the one time I had to take antibiotics and the doctor did not tell me it can impact it’s effectiveness.

I know that sounds strange now, but that was Poland 20 years ago with not much sexual education or information about contraception available.

When my period was late, I thought that it was probably because I was working and studying a lot because I was often tired or sleepless. I did a pregnancy test just in case.

When I did it, I could not believe the result was positive. I could not breathe, I was terrified. I had just started a new life, new job, new university.

When it came back positive, I was very scared. I realised that there was no chance to receive help from my parents. My father was an alcoholic and my mum was struggling with him and my younger siblings.

I told my partner who said that it was all my fault because I should’ve known how do the pills work. Fortunately, I had good, supportive friends and I told them everything.

One of them said that he might know a solution to my problem, but it would be expensive, and we had to make sure that it would be safe. My friend told me that he knew one doctor who could sell pills to induce a miscarriage.

I decided to buy and take the pills. I collected all my savings and borrowed money from friends.

I did everything according to the instructions, but I was scared anyway. A few hours after taking the pills, I started bleeding. It was a lot and lasted the whole night. I lost at least one litre of blood, which left me very pale and weak the next day.

The bleeding gradually decreased and stopped after three days. I was just happy I did not have to go to the back-street  clinic.

Three weeks later, I went to the doctor to check if everything was OK. I lied that my period was overdue for a month and the pregnancy test had come back negative. After the examination, the doctor said that sometimes that happens and there was nothing wrong with me – I was not pregnant.

I felt such an incredible sense of relief, but I didn’t tell anyone for a long, long time. Only the two friends who helped me knew. Occasionally, I thought about my abortion but I never regretted it. Not once.

Eight years after my termination, I moved to England because I loved the country after visiting it in 2007 as a tourist.

I did it for my career, too, after having worked in Poland for eight years, where despite completing my masters degree, I was still in the same place regarding my progression and salary. I also split up with my first husband six months after moving to the UK.

I had a little bleeding, but much less than the first time

I was very happy to be leaving behind a conservative country with little respect for women’s rights. I wanted to learn English and travel across the UK, which I’ve been doing.

I eventually met my second husband and I gave birth to my daughter in 2012. The pregnancy was planned and I was very happy that everything went well. I didn’t want to have any more children so – after a conversation with my doctor – I decided to have a coil.

It was working well for five years, and then I had to get it replaced. Unfortunately, within the time between removing the coil and having a new one inserted, I accidentally got pregnant.

For many reasons, I did not want the second baby so I knew I needed another abortion. Having one in England was a totally different experience to my first.

When I spoke to my GP about it, she asked me if the pregnancy was planned. She then gave me a brochure with a phone number that I needed to call and make an appointment.  After two days, I went to the clinic, had a scan and then pills were given there. The nurse was friendly and supportive.

I had a little bleeding, but much less than the first time. It was free, safe, and legal. Normal. As it should be.

I wish Poland adopted the same policy based on a belief that women are perfectly capable of deciding for themselves whether or not to carry on with a pregnancy.

Only this month, abortion activist Justyna Wydrzynska is facing charges for helping a woman who suffered domestic abuse access abortion pills. These are the same type of pills that my friends organised for me many years ago.

This latest version of the law and the anti-abortion atmosphere that it has been causing for over 30 years in not only detrimental to women’s health, it is a violation of our human rights.

If I am the one to bear the entirety of the consequences – physiological, psychological and financial – of what to do with a pregnancy, why should anyone but me have a say on what I can and cannot do?

I feel it is equally crucial to keep speaking about abortion to help normalise it. The lasting change starts in people’s minds.

This is why I am sharing my story – to keep the conversation going until everyone has their bodily autonomy granted and is free to choose what’s best for them.