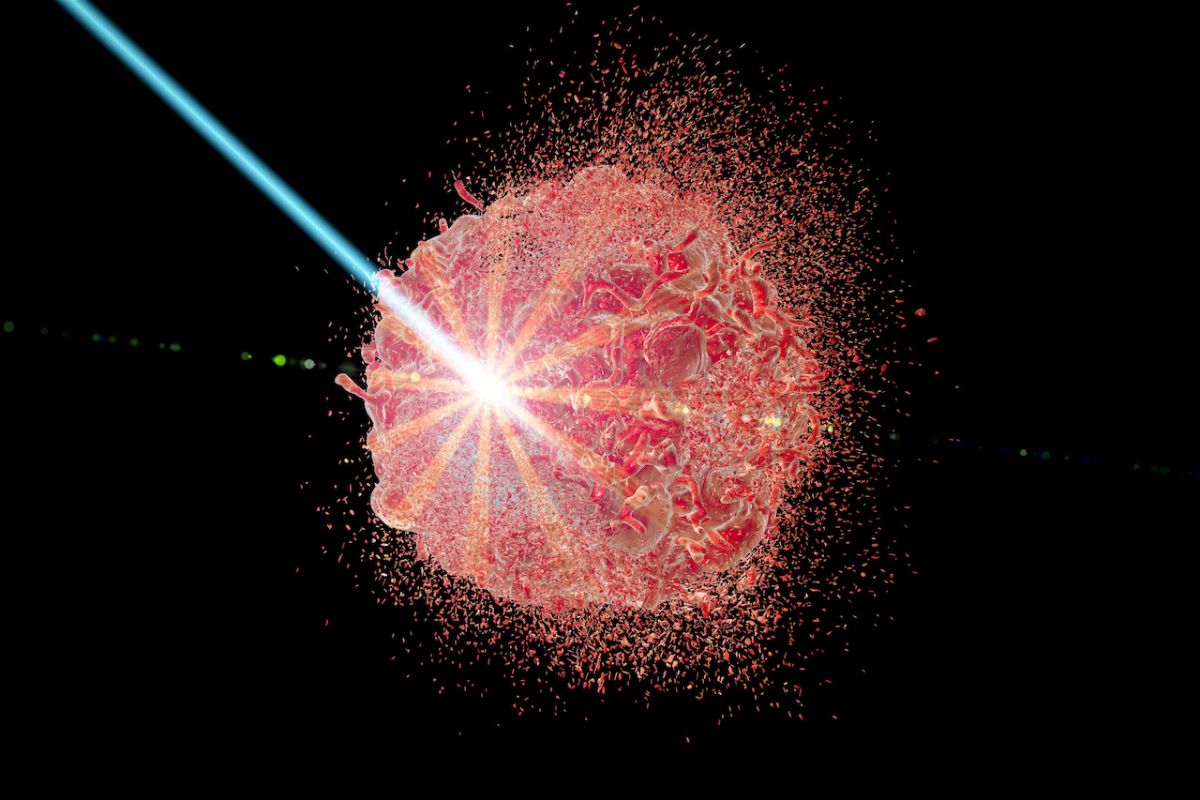 Laser surgery involves the use of a laser (which stands for light amplification by stimulated emission of radiation) for a range of medical and cosmetic procedures. A laser is a source of light which can be used for a variety of applications in surgery.

Light from lasers differs from that which you encounter in everyday life. Naturally occurring light from the sun, or artificial light from a lightbulb, emits a range of wavelengths of light, travelling in many different directions. However laser light is polarized, focusing a beam in one precise location, according to Oregon State University.

Different laser wavelengths are selected based on the location and aim of a surgery. Some lasers, such as erbium lasers, are ideal for cutting body tissue, according to the British Dental Journal, but aren’t as useful for sealing torn tissue. This method, called coagulation, uses heat produced by the laser to either destroy the cells or attach two pieces of tissue together.

As different wavelengths of light come into contact with different types of tissues and skin, it responds in different ways. Light can be reflected, scattered or absorbed by the body’s cells, while other times the laser passes right through the skin, according to the journal IEEE Transactions on Biomedical Engineering.

Chromophores, which are molecules in the body that absorb particular wavelengths, causing them to present a specific color. These molecules absorb more of the light during laser surgery. Examples of chromophores in the human body are hemoglobin and melanin. Absorption in these areas can cause physical, chemical and temperature changes.

Using lasers instead of surgical instruments has many benefits. For example, they can reduce the risk of damage to surrounding tissues, according to the IEEE Journal of Selected Topics in Quantum Electronics. After laser surgery, stitches are less likely to be needed, bleeding is reduced and the healing time for some operations is much shorter.

Different lasers penetrate the body to different levels, for a range of surgeries. Click the labels on the interactive image below to read about some of the applications of each wavelength.

The retina at the back of the eyes is a light-sensitive tissue that receives the light that enters the eye. When that light hits the retina, the tissue creates neural signals that are sent to the brain. Without this process, we wouldn’t be able to see or make sense of the visual information entering our eyes.

As people age, the jelly-like substance surrounding the retina can shrink, pulling on the retina and causing it to tear and bleed, according to the journal The Anatomical Record. Lasers can help prevent this damage, as they create small burns around the tear. The scarred tissue that is left after the operation is tougher and serves as protection to stop the tissue tearing further.

The pulsed dye laser (PDL) is used in laser surgeries that target the blood vessels in the skin. This makes it ideal for patients wishing to reduce the appearance of birthmarks or scars, according to the Journal of the American Academy of Dermatology.

Treatment with PDL takes a few minutes but usually requires about three separate treatments. The concentrated beam of light is released in bursts and aimed at dilated or excess blood vessels. The light is converted into heat, which destroys some of the blood vessels and leaves the surrounding skin unaffected.

– What is selective laser sintering?

– How did doctors perform surgery before modern anesthesia?

PDL treatment has been used to reduce the redness that arises in port wine birthmarks. This coloration of the skin is caused by the abnormal swelling of blood vessels. Because they are bigger, the excess blood reddens the skin.

Another use of this type of laser treatment is to reduce hypertrophic scars. This is when excess collagen is produced at the site of a wound, making a scar appear thicker, wider and often raised, according to the Cleveland Clinic. As well as reducing the redness of the scar, PDL treatment can improve the tissue’s flexibility.

How can lasers remove tattoos?

Much of the pain and numbness that results from nerve damage is caused by peripheral nerves – those that are not in the brain or spinal cord. This type of nerve damage is called neuropathy. One common form of treatment for this is laser therapy, according to the journal BMC Geriatrics.

In neuropathy laser treatment, lasers are used to increase blood circulation to the damaged areas. As the blood transports nutrients and oxygen to the area, the nerves have a better chance at repairing and the pain experienced is lessened.

When the laser penetrates the skin, energy is released into the surrounding tissue. The laser’s light energy is transferred into cellular energy and used for improved blood circulation. Skeletal muscles play a crucial role in the circulation of blood. Assisting the heart, these muscles contract around blood vessels to further pump blood. The muscle cells absorb energy from infrared lasers, making them more active and efficient.

Surgical tools and technology allow lasers to be used deep into the spine to reduce pressure on spinal nerves.

Laser treatment and surgery can be used either to destroy cancer cells or activate cancer drugs, according to Cancer.org. CO2 and Nd:YAG lasers are the wavelengths typically chosen to shrink tumours and are often used in endoscopes, tube-like instruments with a camera on the end that can probe deep into the body, according to the National Cancer Institute.

This treatment includes laser surgery to remove polyps in the intestines that may grow and become cancer and cancer in the skin. Another form of laser treatment applied to cancer is laser-induced interstitial thermotherapy (LITT). Often used for tumours located in the liver and brain, LITT uses heat to damage cancer cells or remove the oxygen and nutrients they need to survive.

Alternatively, argon lasers are used to treat cancer patients who are using light-sensitive drugs (called a photosensitising agent) to destroy abnormal cells. Argon lasers are targeted at the drug once it has entered cancer cells, according to the University of Rochester Medical Center. This activates it to only begin damage when in the abnormal cells so that it doesn’t impact any healthy cells it may enter beforehand.

How can lasers close enlarged veins?

To find out more about LASIK eye surgery procedures, read this page by the Mayo Clinic. Additionally, you can visit the Cancer Research U.K. website to read about the benefits of laser surgery during cancer treatment.

Ailsa is a staff writer for How It Works magazine, where she focuses on writing features on science, technology, history and the environment. Based in the U.K., she graduated from the University of Stirling with a BA (Hons) journalism degree.