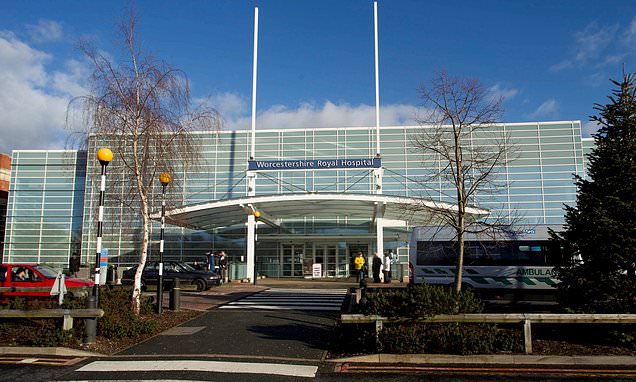 A man has died after being left in the back of an ambulance for an hour outside a busy NHS A&E department.

The unidentified patient was slow to be taken inside Worcestershire Royal Hospital because of ambulance queues.

And, while he was being moved after a long wait, he went into cardiac arrest and died. The incident took place last Wednesday, November 27.

The hospital would not confirm which part of the hospital the patient died in but a spokesperson confirmed it wasn’t in the corridor.

The death may act as a stark warning for what is to come over the winter as NHS England prepares to release its first A&E statistics for the season next week. 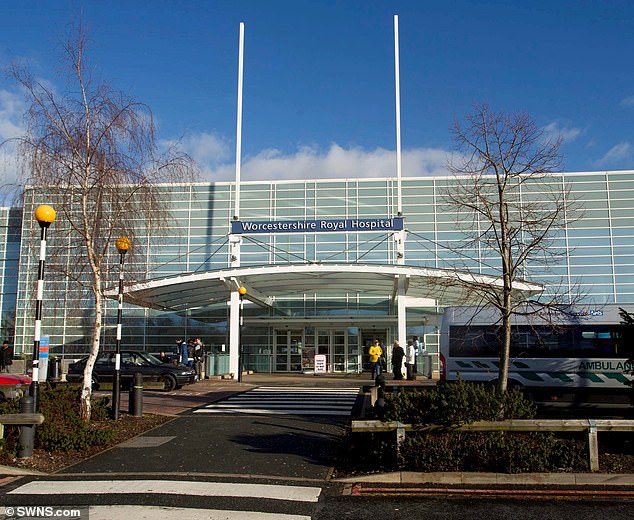 Worcestershire Royal Hospital is rated ‘requires improvement’ by the healthcare inspectors, Care Quality Commission, and officials noted in January that the A&E department was ‘overcrowded’ and had ‘insufficient space’ for the number of patients

Matthew Hopkins, chief executive of Worcestershire Acute Hospitals NHS Trust, said in a statement: ‘We are working with our partners at West Midlands Ambulance Service to look into the circumstances surrounding this case.

‘We have sent our condolences to the patient’s family and we are keeping them fully informed.

‘We know that on the night in question there were a number of ambulances waiting longer than we would want outside Worcestershire Royal Hospital, despite the best efforts of staff in our Emergency Departments (EDs) who work extremely hard to ensure that our patients get the best, safest care possible.

‘We are taking positive action to tackle this but we recognise there is more that we need to do.’

Ambulance patient handovers are supposed to take no more than 15 minutes because longer ones slow the paramedics’ journey to the next emergency.

Lengthy waits are a sign of an overloaded A&E department and happen because there is no room inside for the patient to be treated.

NHS hospitals are on track for their busiest winter in a decade, statistics revealed in November.

There were more hospital admissions between April and September this year – 2.95million – than in any comparable period since at least 2009.

Some 1.49million overnight stays were recorded in English hospitals in the second quarter of the year, official figures showed.

This was a rise of around 300,000 on the same three months last year, and was the second busiest 12 weeks on record.

The first quarter of this year, from April to June, was also the busiest of the past decade, with 1.46million hospital stays.

This suggests the third and fourth quarters are set to follow suit when admissions increase as the year goes on – they tend to peak in the depth of winter in January and February.

The numbers add to recent analysis which showed nine out of 10 overnight beds in England were full during that time.

Unions have warned this winter could be ‘unmanageable’ for NHS hospitals and the health service has lost its ability to catch up with a patient backlog during the warmer months.

An unannounced inspection of the A&E department at Worcestershire Royal Hospital in January gave a damning report of conditions.

The Care Quality Commission (CQC) said: ‘Patients could not access the service when they needed to due to overcrowding’.

The report added: ‘Due to overcrowding in the ED [emergency department] seen on the inspection, there were significant delays in handing over patients from ambulances to the ED.’

Inspectors also said the A&E had ‘insufficient space’ and that they saw ‘many patients being cared for in corridors’.

The hospital is rated ‘requires improvement’ by the Care Quality Commission – it was this year upgraded from ‘inadequate’.

On the day when the patient died last week, 34 ambulance patients waited more than an hour to be let inside, the BBC reported.

And in September there were 257 delays of an hour or longer.

Mr Hopkins added: ‘While recognising that any delay in handovers means a poor experience of care for our patients, as well as being frustrating for ambulance crews and ED staff, we have put in place procedures which are designed to support ambulance crews and protect patient safety if ambulances are waiting.

‘This includes our ED nurses carrying out regular checks, on board the ambulance, on any patients whose handover is delayed so that if their condition deteriorates action can be taken.

‘We repeat our apologies to any patient whose admission to ED has been delayed.

‘Reducing waits and improving ambulance handovers is our number one quality and safety improvement priority and we will continue to work to deliver the improvements that are needed, not just in our hospitals but across our health and care system with our partner organisations.’