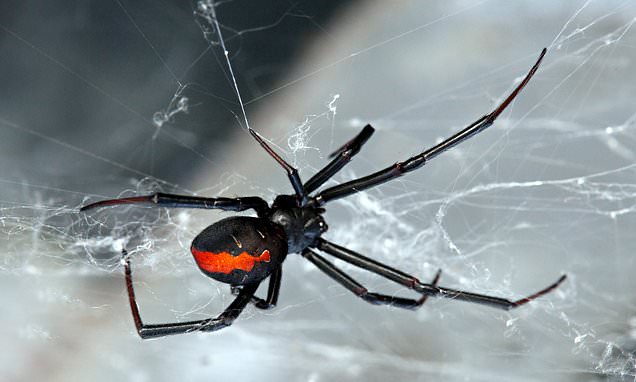 Man, 50, is left unable to urinate after being bitten on the foot by a black widow spider

A 50-year-old man was left unable to urinate after being bitten on the foot by a black widow spider.

The unnamed man, of Ontario, Canada, was bitten on the foot while walking through tall grass near his home, a case report said.

He didn’t think much of it, until he was left so ill he went to hospital with excruciating pain and the inability to urinate.

It is believed to be the first time the symptom has been recorded, according to the medics who published the tale.

The spider’s venom is already known to cause high blood pressure, heavy sweating and muscle pain – all of which the man had. 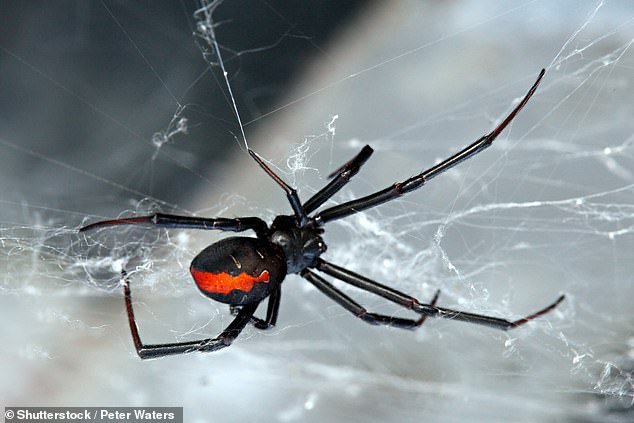 A 50-year-old man was left unable to urinate after being bitten on the foot by a black widow spider, pictured, while walking near his home in Canada

In Canada, black widow spiders are rare because they live in warmer climates, so it is possible it didn’t occur to the man that it was a deadly spider.

After two hours, he began to feel pain. It gave him a restless night sleep and in the early hours he awoke with agonising abdominal pain.

The man told doctors about his spider bite, but they thought it was nothing more than a coincidence.

The man returned later that day because his abdominal pain had worsened, so doctors sent him to the larger Ottawa Hospital, for more extensive tests.

By the time he had arrived to the emergency room, where Dr Carere treated him, he was sweating heavily and both of his eyelids were swollen.

His blood pressure was extremely high and a CT scan revealed that his bladder was massively distended, which means it was swollen and giving the sensation of needing the toilet but nothing is released.

When a catheter was inserted, it drained approximately one litre of clear urine, the case reported.

Doctors found no evidence of a bite or rash when they carefully examined his skin.

They suspected the man was bitten by a northern black widow spider, a species found in southern Ontario.

He was treated with various drugs and opioids to control the pain, and by the second day he was able to use the toilet again.

Latrodectism is the medical term for the illness caused by a spider bite.

The venom from a black widow spider contains a variety of toxins including alpha-latrotoxin.

This toxin leads to a release of various neurotransmitters, which communicate messages in the body, which may have been responsible for the man’s range of symptoms.

The release of a neurotransmitter called acetylcholine may be the reason the man developed urinary retention, Dr Carere said.

Changes in the level of acetylcholine, which activates muscles and helps with arousal, short-term memory, and learning, can have significant effects all over the body, including the ability to urinate.

The doctors can’t definitively prove that the spider bite was the cause of the man’s urinary retention, Dr Carere said.

The man was likely to have an enlarged prostate condition due to his age, which could have been the reason behind his difficulty to use the toilet at that time, Dr Carere admitted.

‘Black Widow spider bites are exceedingly uncommon in Canada,’ the authors wrote in the Canadian Journal of Emergency Medicine.

‘However, because of climate change and the necessity for a warmer climate for spider reproduction, we may encounter more cases of latrodectism in the future.’

Black widows are found throughout the US, mostly in the south and west, keeping hidden in barns, sheds, stone walls, fences, woodpiles, porch furniture, and other outdoor buildings.

While these spiders’ bites can cause fatalities in humans, they rarely do, according to the National Institutes of Health.

Millions of false widows, Britain’s most venomous spider, have been found across the UK and the population is believed to be growing.

The species has a brown bulbous abdomen with cream markings that look like a skull. They have long legs and can reach about 15mm in size.

Also known as steatoda nobilis, the spider is frequently confused for the black widow, which has deadly venom.

The false widow was first spotted in the UK in Torquay, Devon, in 1879, and it is understood that it may have made its way to these shores from Madeira or the Canary Islands in a shipment of bananas.

The Natural History Museum says that warmer summers mean the spider is spreading northwards through the UK, having been found mainly in southern England. 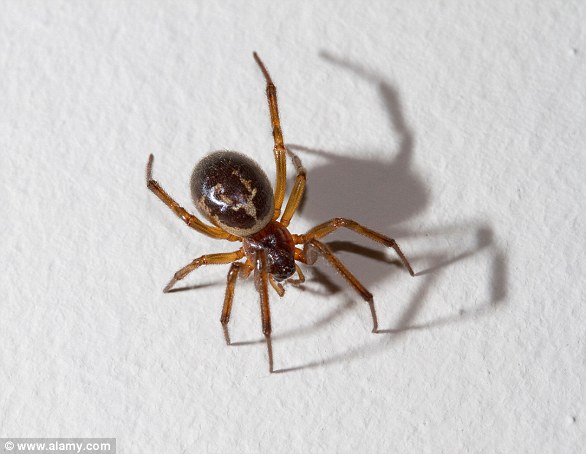 IF YOU GET BITTEN…

The first thing you should do is wash the area thoroughly with soap and water to prevent infection – and don’t scratch, as if you break the skin there’s more chance for bacteria to get in.

Cover bites with a plaster and apply an antihistamine sting cream to calm any inflammation or itching, says Stuart Hine, from the Natural History Museum’s identification and advisory service.

Any redness, pain or swelling should subside after three days.

Be alert to potential signs of infection, such as weeping blisters or painful swelling, that continue to get worse after a few days.

If this happens, seek advice from your GP.