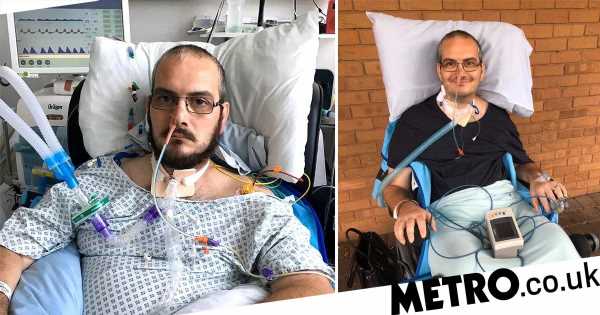 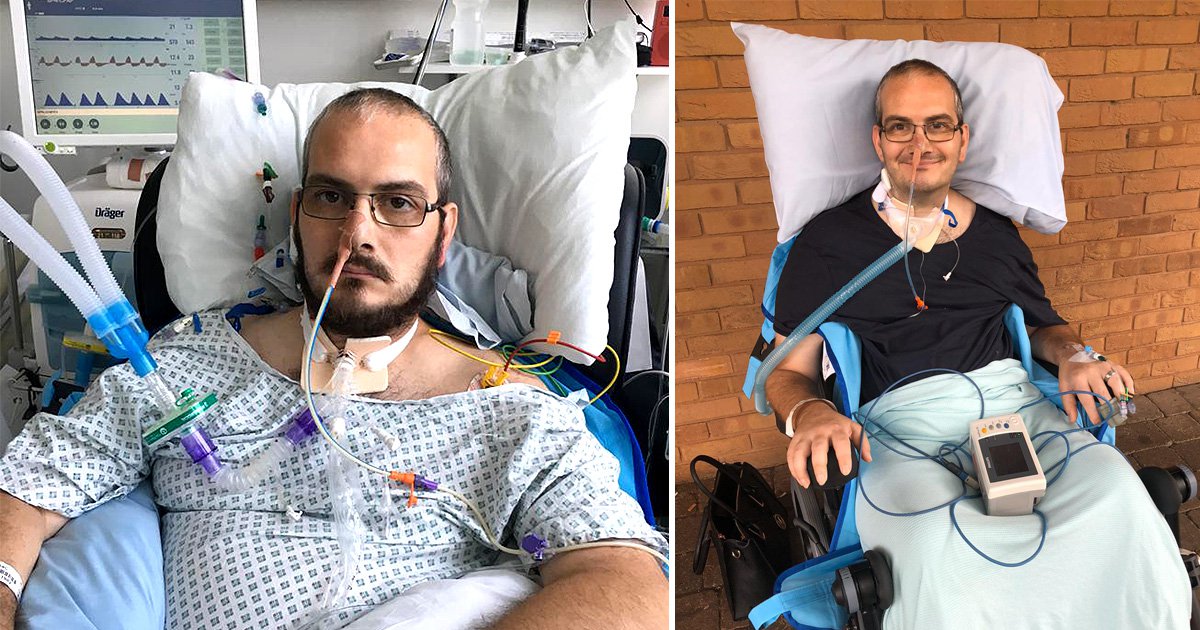 Darren Roberts was lying in bed watching TV one Sunday afternoon, when he suddenly felt a sharp pain in his neck and shoulder, followed by terrible pins and needles in his arms.

Within 20 minutes he would be completely paralysed, and doctors would later tell him that he would never walk of use his hands again.

Assuming he had a trapped nerve, Darren decided to run a bath in the hope it would ease the pain, but before long his toes, legs, hips, arms and torso had all gone numb.

In less than half an hour, he was unable to move a single part of his body apart from his head, leaving him trapped in the bath tub at his family’s home in the Cynon Valley, Wales.

‘During all of this, my parents had called for an ambulance, and when they arrived they basically had to remove me from the bath as I was basically dead from the neck down,’ says Darren, 39, recalling the events of July 2019 when he was 36.

Car enthusiast Darren, who used to love playing golf, was taken to Prince Charles Hospital in Merthyr Tydfil where an MRI scan was carried out.

‘I had an inkling it was more serious than I thought, although I was still awake and breathing when the ambulance arrived. When I had the MRI I was completely immobile,’ he says.

The decision was made to take Darren by ambulance to the University Hospital of Wales (UHW) in Cardiff where he was put in an induced coma in intensive care.

His health then took a further turn for the worse when he developed an aggressive form of pneumonia and didn’t respond well to treatment.

‘My family were told to prepare for the worst,’ says Darren.

‘Fortunately I did start responding to treatment and I was brought out of an induced coma after four weeks.’

It was at this point that Darren started to realise the true extent of his condition – that the damage to his spinal cord was irreversible.

‘I knew my life was never going to be the same again. I didn’t know what to think because I was such an independent person. It was a massive shock to my system to now be in a position where I had to ask for everything – even something as little as a sip of water.’

While Darren has gained some movement in his arms but zero function, he is now classed as disabled tetraplegic which means he needs help with almost all aspects of his life.

‘I can’t eat or drink without assistance. I’m also fully incontinent. I have a suprapubic catheter fitted to manage my bladder and bowel movements every day,’ he adds.

As doctors didn’t know what had caused Darren’s condition, they couldn’t tell him if he would make any recovery.

It is believed that he suffered a ‘sudden unknown spinal injury’ while at home that Sunday afternoon.

Darren was transferred to Rookwood Hospital in Llandaff, Cardiff, in September 2019, where it was confirmed his spine problem would be life-changing. He has remained under their care ever since.

‘At this point, my mood did become really low but I did try my best to hide it,’ he says.

‘Nothing can prepare you for the news that you’ll never walk again, but to be told this along with the fact I’d never be able to use my hands again was devastating.’

Due to his condition, Darren cannot return to his old home with his family and requires a new home with 24-hour care.

A GoFundMe campaign has now been launched in a bid to buy him specialist equipment for the house, based in Cwmbach, and give him back some of his freedom and quality of life.

Darren adds: ‘I feel like I’m just a burden to everyone which doesn’t help my depression and anxiety.’

Despite everything he has been through, Darren said his family have been very supportive throughout his treatment, and added that his mother has even put off having heart and hip surgery because of his situation.

‘Staff at Rookwood went above and beyond to keep the ward Covid-free throughout the whole time we were there, which to my knowledge is one of the only wards, nursing homes or medical facilities to do so,’ he says.

‘Nurses gave up so much, even isolating from their own families to care for the patients on the spinal unit as we were classed as high-risk and probably wouldn’t have survived the initial outbreak of the pandemic due to low immune system and respiratory problems.’