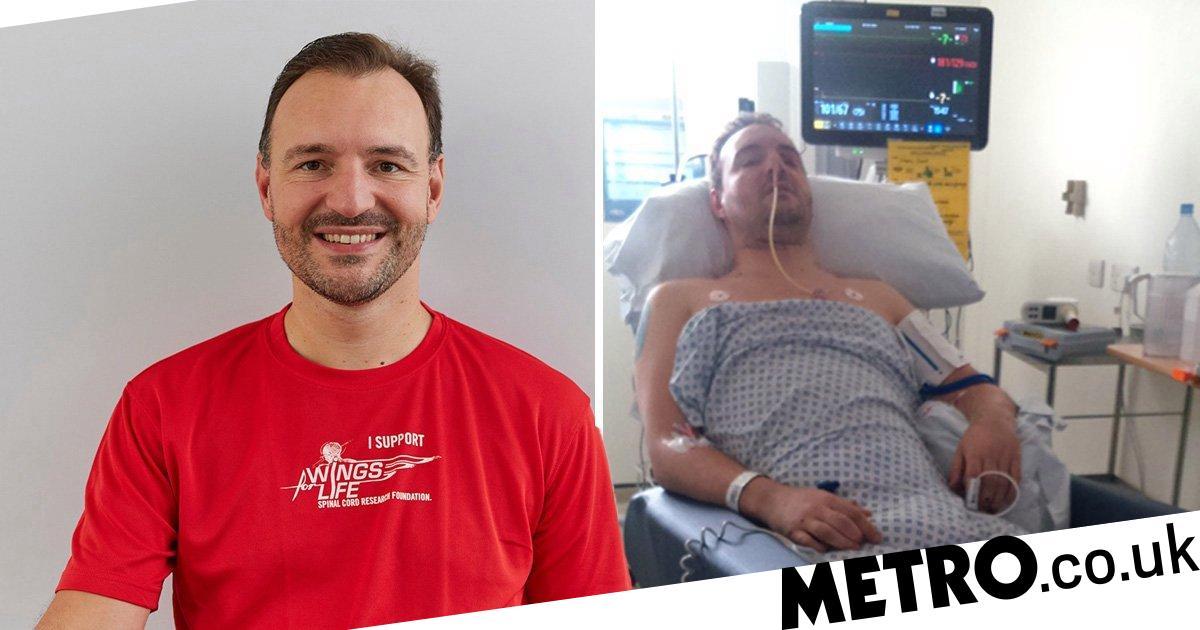 He tells Metro.co.uk: ‘Almost three years ago, I thought I would never be able to move again. I was paralysed from the neck down. This surgery set me on a path that has been incredibly difficult but now I can walk, run and cycle again.’

Back on 16 June 2016, the day of the accident, Steven was taken to hospital and admits he struggled to accept the news.

He explains: ‘The doctors said my injury was devastating. They said they didn’t know what my prognosis would be. They said some people make some recovery and other people never get any sensation back.

‘My wife Helen and I had a very honest conversation and I said I didn’t want to use a powerchair controlled by my mouth for the rest of my days. I completely understand that some people lead very full lives in that situation but it was not what I wanted for me or my wife.

‘I said that if that is the case, I wanted to go to Switzerland and end my life there. It was a very stark conversation.’

The doctors at Kings College Hospital told him about the experimental Injured Spinal Cord Pressure Evaluation procedure (ISCoPE), developed by Professor Marios Papadopoulos and his team at St George’s hospital in Tooting, London.

He says: ‘They asked me if I wanted to take part. They said they couldn’t guarantee it would work but I thought they couldn’t make it any worse.

‘When you have nothing, you jump at the opportunity. I wasn’t going to get this chance at any other time.’

The idea behind the procedure is that although damage is done to the spinal cord through the initial injury, the swelling and inflammation it causes can make it even worse.

The spinal cord is a rigid structure and swelling causes a build up of pressure, which can damage the nerve cells around the injury.

The ISCoPE procedure involves two probes being inserted around the site of the injury – one to monitor pressure of fluid in the spinal cord and the other to remove a small amount of spinal fluid to analyse if nerve cells are dying.

If the pressure is high, they can use medication to increase blood flow and to keep the cells alive.

The surgery was successful and in the days that followed, Steven was able to make very, very small movements.

He explains: ‘The odds were against me but on day two after my surgery, I was in intensive care and I started to get some sensation back.

‘It was like being on fire. From the waist to my chest, I had hypersensitivity and when the nurse just rested it on my arm, it was so incredibly painful.

Despite the pain, Steven had hope and he decided to set an ambitious goal.

He says: ‘I turned to face my wife. I asked her what date 200 days from then was and she said December 22nd.

‘I said to her that by Christmas day, I would be back to normal. I used that promise to her as my daily motivation to try and achieve just something every day.’

Every day, Steven would make a small bit of progress and celebrate what he achieved.

By day 90, he took his first steps following the accident.

‘I was at my mum’s house and she was saying “we need to get a ramp up to the door” because I was able to stand at that stage but I was using a wheelchair.

‘I said “why don’t I just try to walk?” I stood up, which I had been doing, but I hadn’t tried to walk unaided until that point. I shuffled into her house and out again.’

Steven spent two months in St George’s before moving to a specialist rehabilitation centre at the Royal National Orthopedic Hospital for another two months.

Even after coming out of hospital, he needed to continue his rehabilitation at home but he met his goal and was able to walk on Christmas day. He took one day off before setting his next goal.

He says: ‘I decided to post on the internet saying (before I told my wife) that I was going to get back on the same bike I fell from and I was going to cycle the 100 miles that I never got to do, another 200 days from that day.

‘My wife came in with her phone and said “What is going on here.”

‘I told her that I had a plan – I was going to do it on a turbo trainer. I wouldn’t go anywhere and I couldn’t fall off.’

Steven used his training to help with his rehabilitation but he also wanted to give back and help others who had spinal cord injuries.

While researching which charity he wanted to raise money for, he came across Wings For Life, a charity focusing on research.

After speaking to them, he discovered that they had funded the ISCoPE trial that had helped him with his recovery.

‘They told me they had funded it and there was like a 10 second silence,’ says Steven.

‘I started raising money for them because they had put me back on my feet and that is the least I could do.’

In July 2017, Steven completed his challenge, cycling 100 miles in just under six hours and raising £37,000 for the charity.

From there, he started thinking about another goal, creating the 100% challenge, where the idea is that people who take part just give everything they can give, and raised another £17,000.

This year Steven has decided to take part in the Wings for Life World Run, a unique event with people across the world setting off at the same time against a pacer car (or in some races, through an app rather than an actual car).

Each participant runs for as long as they can and once the car passes them, their race is finished.

Steven hopes to run 5k – a distance he used to run a few times a week before his accident.

He explains: ‘I am mindful to say that this is an unusual story. Most people with spinal cord injuries can’t walk again.

‘It would be disingenuous to say I am ‘back to normal’. I still have some paralysis in my hands. People focus on walking with spinal cord injuries but in reality it affects your arms, legs, bladder, bowels, sexual function and everything in between. As soon as you are able to stand and walk again, that’s not the end of your struggle.

‘I still have some days where I can’t get out of bed. Sometimes I just have to write the day off. I still spend a lot of time in rehabilitation. I still have complex spasms, specifically at night when I am tired. It’s like having a cramp but in your whole body.

‘I fully expect that after I do this run, I am going to be in bits afterwards for a few day. I am not back to the way I was before the accident but I am much further to than I thought I would be.’

Steven will be running at the Chiswick Park event from 12pm on Sunday, with other races taking place across the UK and in cities across the world.

He adds: ‘5k might not seem like a lot but it is an important marker for me. I haven’t run since the accident so to do that would be absolutely amazing.’

MORE: Strong Women: ‘My mum died so young – I needed to be healthy for my children’

MORE: Strong Women: ‘My life expectancy is tragically short, but I’m not bound by it’