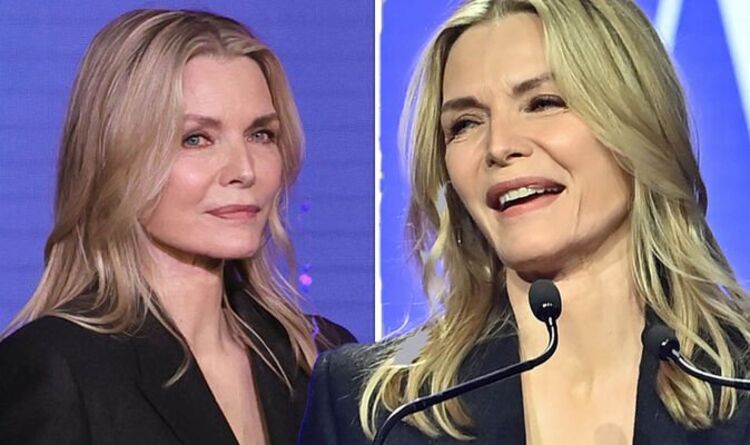 Having won numerous awards for acting including a Primetime Emmy Award, BATFA and three Oscar nominations, the star has also managed to remain youthful in her looks and avoid any serious health conditions. With her iconic blonde locks, many would say that the star does not look much different from when she appeared in films like Scarface and The Witches of Eastwick. But in an interview with People, Pfeiffer remarked: “I certainly see that I’ve changed. I just try not to dwell on it. Ageing happens to every single one of us. Once you accept that it unburdens you.” As well as accepting the natural effects of ageing, the star told Lorraine Kelly the three things she prioritises within her wellness routine to age well.

Appearing on ITV morning chat show Lorraine back in February 2021, Pfeiffer was asked what is her secret to staying healthy, to which she replied: “It’s simple! Eat well, exercise and get lots of sleep.

“We’re always looking for that magic bullet and they don’t exist and you know when I’m not working, I’m giving myself a little more leeway.

“When I’m not on camera, I’m not eating so good and having a little too much wine and I look like it.

“That’s really it. So that’s the big secret: there’s no secret!”

Although sounding simple, several studies have shown that eating well can improve your mental sharpness, boost your energy levels and increase your resistance to illness as you age.

The Office of Disease Prevention and Health Promotion explains that older adults are at greater risk of chronic diseases, such as heart disease and cancer — as well as health conditions related to changes in muscle and bone mass, such as osteoporosis. By following a good nutrient-packed diet and active lifestyle, individuals can help to minimise their risk.

Older adults also tend to have lower calorie needs, due to changes in their metabolism, less muscle mass, loss of bone and less engagement in physical activity.

Nutrient needs in this section of the population are also affected by chronic health conditions, use of multiple medicines, and changes in body composition.

In the past, Pfeiffer said that she follows a vegan diet, and has spoken about the positive effects the lifestyle choice has had on her body.

Talking to Urbanette, the star said: “I love the vegan diet because I love carbs.

“Eating this kind of food is much healthier, and you avoid a lot of toxins that could age your skin and body. I noticed a difference in my skin not long after I became a vegan.”

But more recently, in 2019, the star updated fans on her dietary choices, telling The Sunday Times that she was now “paleoish”.

The Paleo diet, also known as the Paleolithic diet or caveman diet, is a modern diet based around foods which could be obtained by hunting and gathering in the Paleolithic era.

During the interview, the actress added that she enjoys “waking with the sunrise” and partakes in a “bit of yoga and pilates,” but still allows herself one regular indulgence in the form of “wine or tequila” of an evening.

The NHS explains that physical activity and exercise can help you to stay healthy, energetic and independent as you get older. Those who are inactive remain at a higher risk of developing heart disease, obesity and early death.

There is also strong evidence to suggest that people who are active have a lower risk of heart disease, stroke, type 2 diabetes, some cancers, depression and dementia. Therefore, if you want to stay pain-free, reduce your risk of mental illness, and remain independent well into old age, you’re advised to keep moving.

Adults should aim for at least 150 minutes of moderate activity every week, which can include the following moderate-intensity aerobic activities:

A study conducted by Northwestern University back in 2014 remarkably found that people who had most of their daily exposure to bright light in the morning had a significantly lower body mass (BMI) than those who had light exposure later in the day.

The study’s senior author Phyllis C. Zee, M.D. said: “The message is that you should get more bright light between 8am and noon.” Around 20 to 30 minutes of morning light was thought to be enough to affect BMI, as well as other variable factors such as physical activity level, calorie intake, sleep timing, age and time of year.